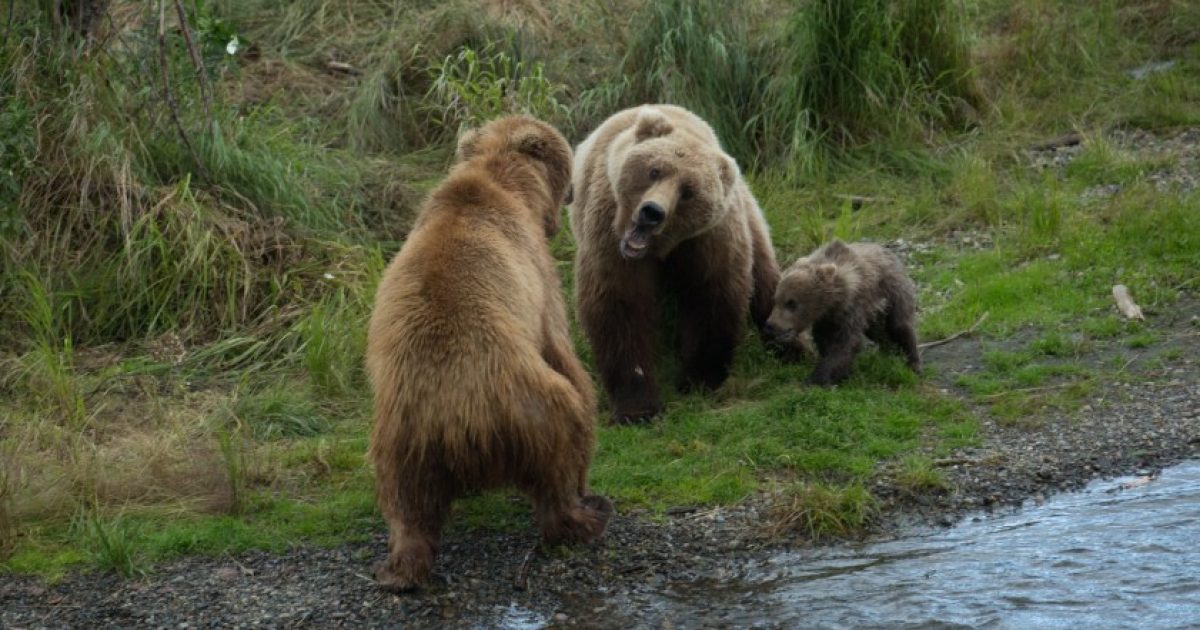 Watch as a Grizzly sow is seen protecting her cubs from a starving male in an intense, savage and very dramatic video. In reality, bears are not known for coexisting with each other, they are solitary beasts that roam a wide swath of territory. The only time they do get together, is to mate, or gather on rivers to feed on salmon to fatten-up for the winter. And even then, they have a pecking order, with the dominant males occupying the best spots to catch fish.

Males and females after mating, go their separate ways and don’t have any interaction after that. If a lone male comes upon a sow with cubs, chances are the male will try and kill the cubs to make the female go into season earlier than normal. In the case of the video below, the male was starving and if he could, he will kill the cubs and eat them. It is very intense & dramatic video and worth watching.

The grizzly bear, less commonly known as the silvertip bear, is a large subspecies of brown bear inhabiting North America. Scientists generally do not use the name grizzly bear but call it the North American brown bear. Multiple morphological forms sometimes recognized as subspecies exist, including the mainland grizzly, Kodiak bear, peninsular grizzly, and the recently extinct California grizzly and the Mexican grizzly bear.

On average bears near the coast tend to be larger while inland Grizzlies tend to be smaller. Meriwether Lewis and William Clark named it to be grisley or “grizzly”, which could have meant “grizzled”,or “fear-inspiring”. Nonetheless, after careful study, naturalist George Ord formally classified it in 1815 – not for its hair, but for its character – as Ursus horribilis (“terrifying bear”).