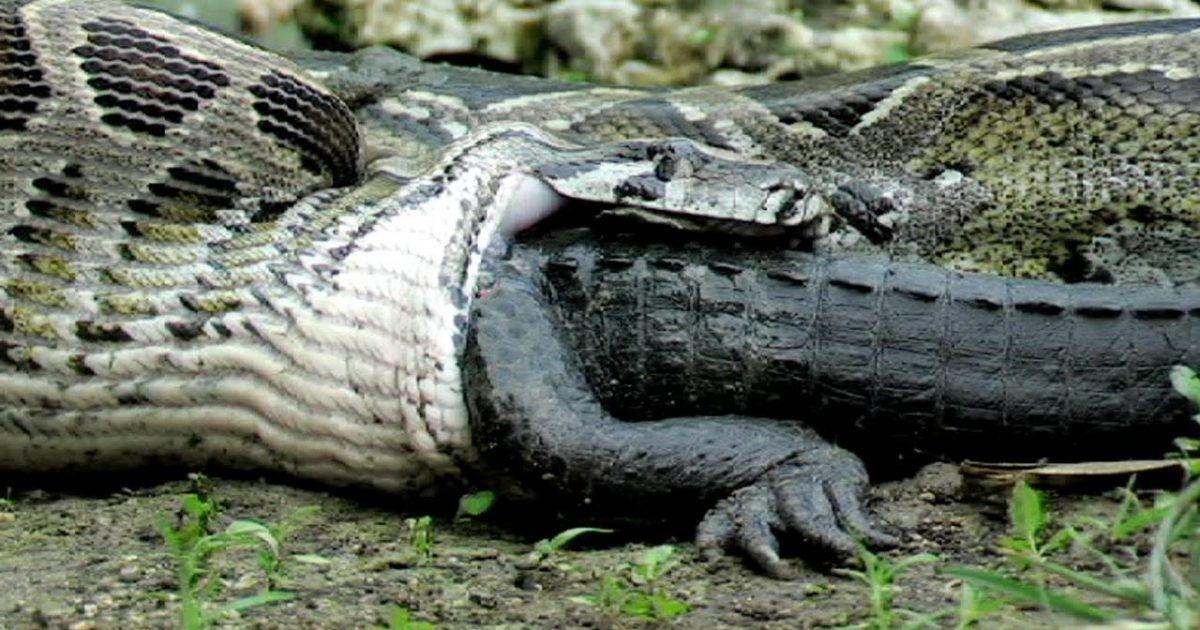 Watching a large python constrict and then eat an alligator whole will be enough to give you nightmares, especially if you have a fear of snakes. If you live in , or around certain areas in Florida, you might want to be aware of your surrounding, the video below was filmed near the Everglades. Many people who keep snakes like Burmese pythons are not prepared and cannot deal with the animals when they get too large.

But instead of killing it, or taking it to a zoo, they have released them into the wild. The environment in Florida is very close to the snake’s natural environment in Asia, so they have adapted quite well and started a sizable breeding population in the wild.

Burmese pythons have an established permanent breeding population in South Florida and belong to the “new” apex predators of the Everglades today. Top predators like the american alligators prey regularly on all kinds of reptiles, including pythons. An adult alligator will have little trouble to overpower, kill and eat any juvenile and in some cases even an adult constrictor.

A fully grown Burmese Python can reach over twenty feet in lengths and becomes extremely dangerous prey item for most crocodilians. These large constrictors have not much to fear and will feed on most animals they come across (including alligators) when hungry. Pythons are non venomous snakes and kill by constricting their prey, wrapping its body around in a thigh coil until the animals dies of suffocation within a few minuets.

The prey will be swallowed mostly head first and whole. This process can take considerable time during which the snake is vulnerable to attacks from other predators. Confrontations between pythons and alligator have been recorded during the last years but still, very little is know on the outcome of such “fights”. The fact is that invasive species like the burmese pythons are a part of the Everglades today and it is up to everyone to find out as much as possible and use the newly gain knowledge to keep the python population in check