Settle back and watch as this young woman in the video below fires the 1918 Mauser “T-Gewehr”, but before you do that, let me give you a little history lesson about this monster rifle.  The T-Gewehr was originally made to shoot at tanks, translated “T- Gewehr” means- “Tank Rifle”. During WWI, it was the allies that introduced tanks onto the battlefield and it literally made the German troops crap their pants in fear.

Imagine for a moment, that out of the smoke after an artillery barrage, you see a giant monster of a machine slowly advancing on your line of trenches, you’d be scared too, since a massive machine like that had never been seen on any battlefield before.

But, after the initial shock of the tank being introduced onto the battle field, the German High Command stepped-up to try and find a way to take them out…enter the “T-Gewehr”. This rifle truly is as much of a monster then the machines it was shooting at.

In a way, the T-Gewehr is very similar to our own Barrett .50 Caliber rifle, you could almost say, the T-Gewehr was the Barrett’s Great-Grandfather . The Germans have always been masters of engineering and were always ahead of the curve when it came to weapons development.

Wikipedia had this to say about the T-Gewehr:

The Mauser 13 mm anti-tank rifle (German: Tankgewehr M1918, usually abbreviated T-Gewehr) was the world’s first anti-tank rifle,i.e. the first rifle designed for the sole purpose of destroying armored targets and the only anti-tank rifle to see service in World War I. Approximately 15,800 were produced. 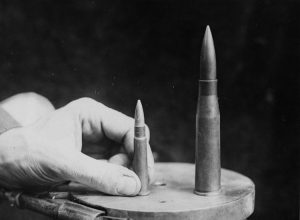 Comparison of a standard British rifle bullet and a 13mm T-Gewehr cartridge.