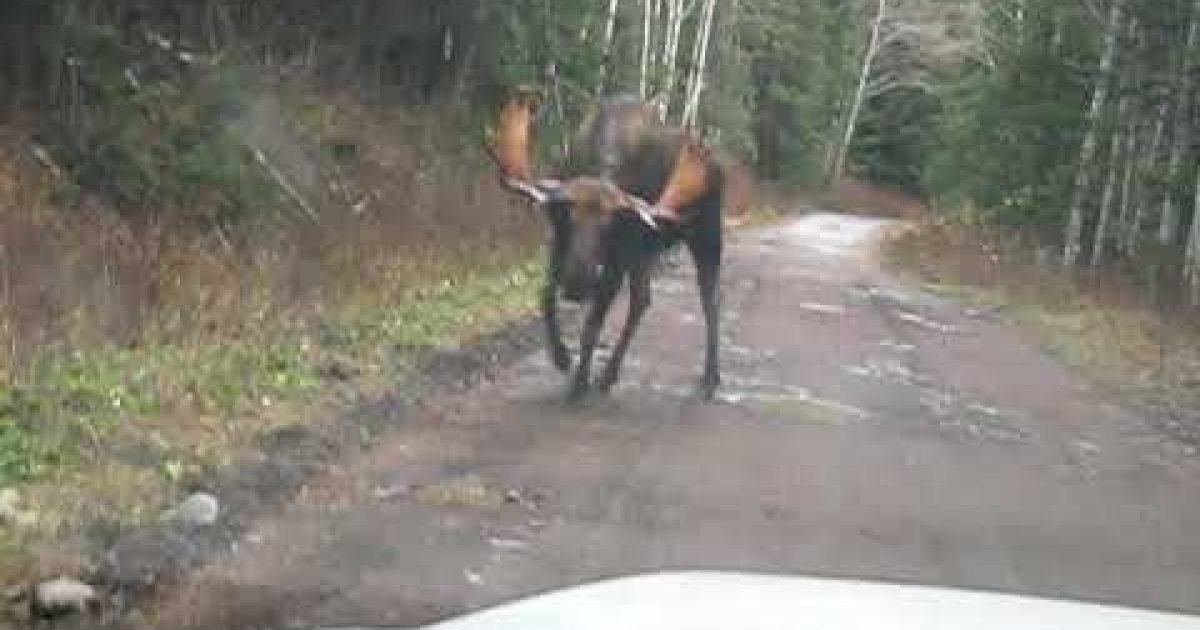 The bull moose in the video below, has had enough harassment by the two idiots driving the truck behind him and decides to teach them a lesson they won’t soon forget.  The two morons in the vehicle thought that it would be funny to harass the animal, so they kept following the moose, who, from what I can see, just wants to get away from the jerks following him.

Although they appear gentle, wild moose attack hikers and tourists every year in Glacier National Park, Yellowstone, Grand Tetons, Alaska and throughout Canada. In fact, park rangers say, that wild moose are more dangerous than grizzly bears. Park rangers will also tell you, that a moose will attack you when they feel threatened, even if they are only trying to ensure that you are not dangerous. Since a moose weighs upwards of 1,500 pounds, ensuring you are not a threat, can be the same as being hit by a car! Generally, a wild moose judges a human as threatening due to bad judgment on our part.

The idiots in this video though,  thought that because they were in a truck that they’d be safe, nothing could have been further from the truth. After casing the moose down the road for a bit, the moose finally had enough and decided to let these boys know that he doesn’t appreciate being chased down the road in HIS forest.
The moral to the story…Don’t mess with the bull (especially a bull moose) !!
This excerpt comes from reference.com:

“Moose attacks are rarely fatal for humans, so generally one or fewer people die each year from moose. Many people are injured by moose every year, particularly in urban areas, such as Anchorage, Alaska, which have high moose populations. Moose generally prefer to avoid humans, but sometimes attack if they feel threatened. Cows with calves are particularly dangerous because mothers are very protective of their offspring. Bull moose become more aggressive during mating season, which occurs in September and October. Moose attacks are avoided by staying a safe distance from the moose and refraining from acting in a threatening or aggressive manner toward them.”