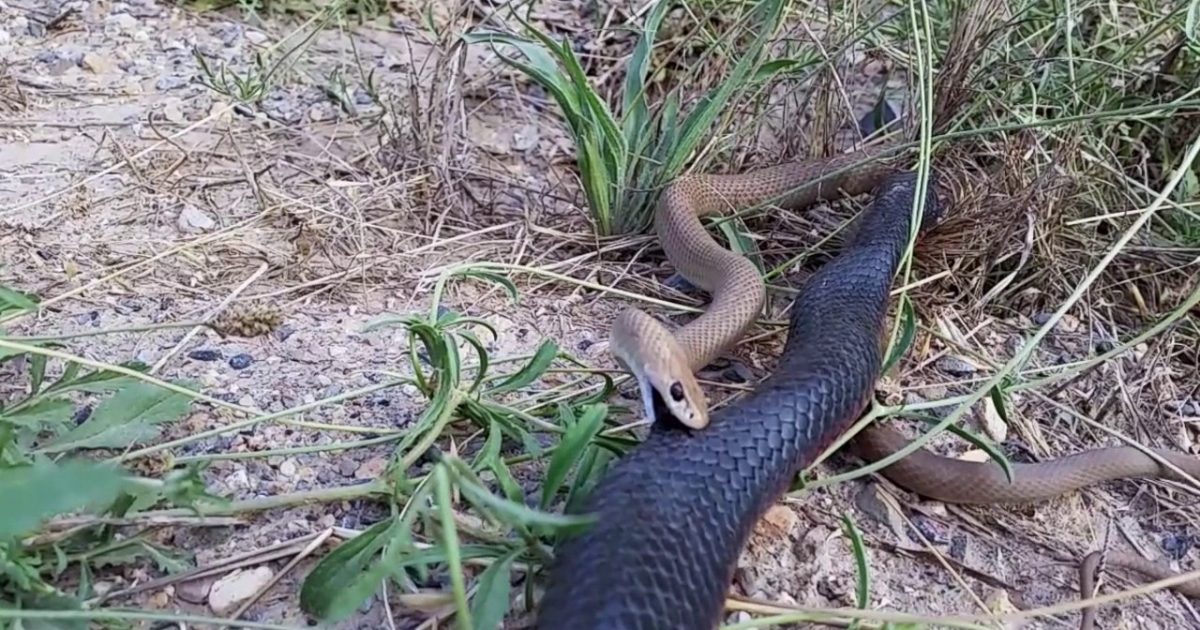 What happens when two of Australia’s venomous snakes decide to duke it out in a death match? One wins and the other…well he ends-up as lunch. This video is really quite fascinating, but at the same time, it’s really creepy. There’s something about two reptiles (snakes in particular) fighting it out, that just sends chills down your spine. Since these animals are both cold blooded, as humans, we really don’t care which side wins. But it’s like watching a train wreck…it’s difficult to look away.

The guy who posted this video to YouTube, had this to say:
“Came across this on the side of the road at Myponga SA, we saw the Redbelly chase the Brown across the road then catch it. This is a longer version of the other video with footage and photos of the Brown snake being eaten. It was an amazing thing to witness.”

Here is a little background on the two combatants courtesy of Wikipedia:

The eastern brown snake (Pseudonaja textilis), often referred to as the common brown snake, is a species of venomous elapid snake of the genus Pseudonaja. This snake is considered the world’s second-most-venomous land snake based on its LD50 value (subcutaneous) in mice. It is native to Australia, Papua New Guinea, and Indonesia. It can be defensive and is responsible for about 60% of snake bite deaths in Australia.

The red-bellied black snake (Pseudechis porphyriacus) is a species of elapid snake native to eastern Australia. Though its venom is capable of causing significant morbidity, a bite from it is not generally fatal and is less venomous than other Australian Elapid snakes. It is common in woodlands, forests and swamplands of eastern Australia. It is one of Australia’s best-known snakes, as it is common in urban areas along the eastern coast of Australia. It has an average total length (including tail) of 1.5 to 2 meters.

Since both snakes are venomous…what this fight comes down to, is size, which the red-bellied black snake has on his side.