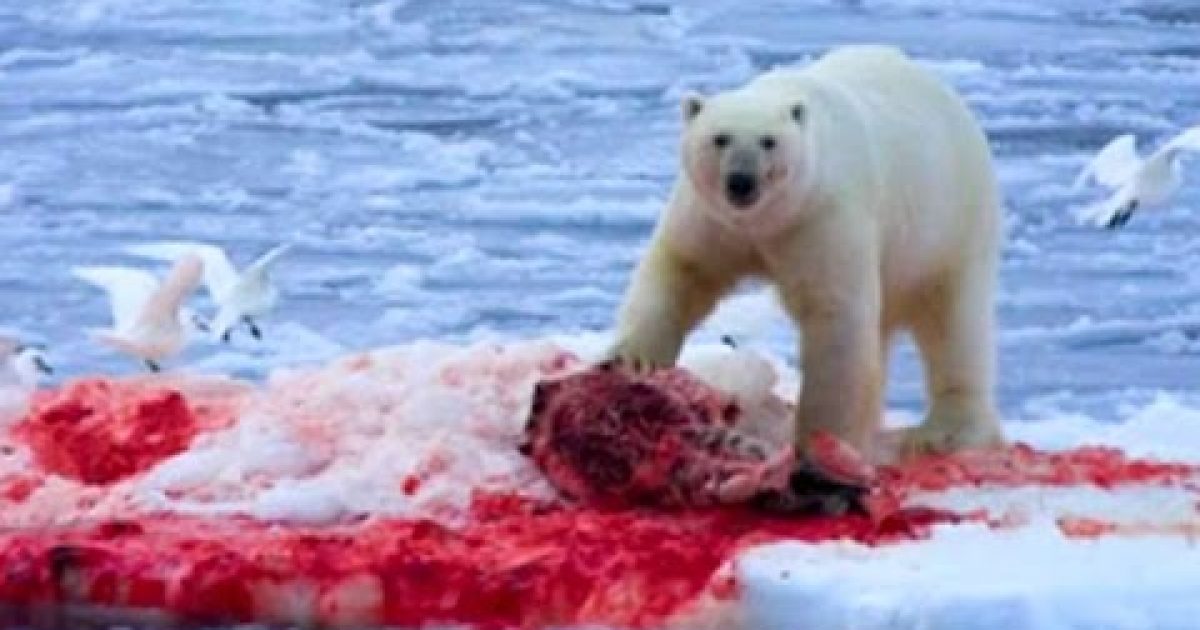 When hungry polar bears have it in mind to have walrus for lunch, there’s usually no stopping them. And such is the case in the video below, The walruses were just hanging-out on the ice and when they saw a hungry polar bear approach, the majority of them headed for the water…well almost all of them anyway.  Polar bears are large, white bears that like cold climates, fatty meals and when hungry, spend long days of hunting in search of a meal.

Polar bears are excellent swimmers; their scientific name, Ursus maritimus, means “sea bear,” according to the San Diego Zoo. They use their big front feet to paddle and their back legs as rudders. These bears have been known to swim more than 60 miles without rest.

The walrus is a large flippered marine mammal with a discontinuous distribution about the North Pole in the Arctic Ocean and subarctic seas of the Northern Hemisphere. Adult walruses are easily recognized by their prominent tusks, whiskers, and bulkiness. Adult males in the Pacific can weigh more than 4,400 lbs.
Walruses live mostly in shallow waters above the continental shelves, spending significant amounts of their lives on the sea ice looking for benthic bivalve mollusks to eat. Walruses are relatively long-lived, social animals, and they are considered to be a “keystone species” in the Arctic marine regions.
The walrus has played a prominent role in the cultures of many indigenous Arctic peoples, who have hunted the walrus for its meat, fat, skin, tusks, and bone. During the 19th century and the early 20th century, walruses were widely hunted and killed for their blubber, walrus ivory, and meat.
Sadly for one sleepy walrus, it didn’t wake-up in time to get away from the hungry polar bear.