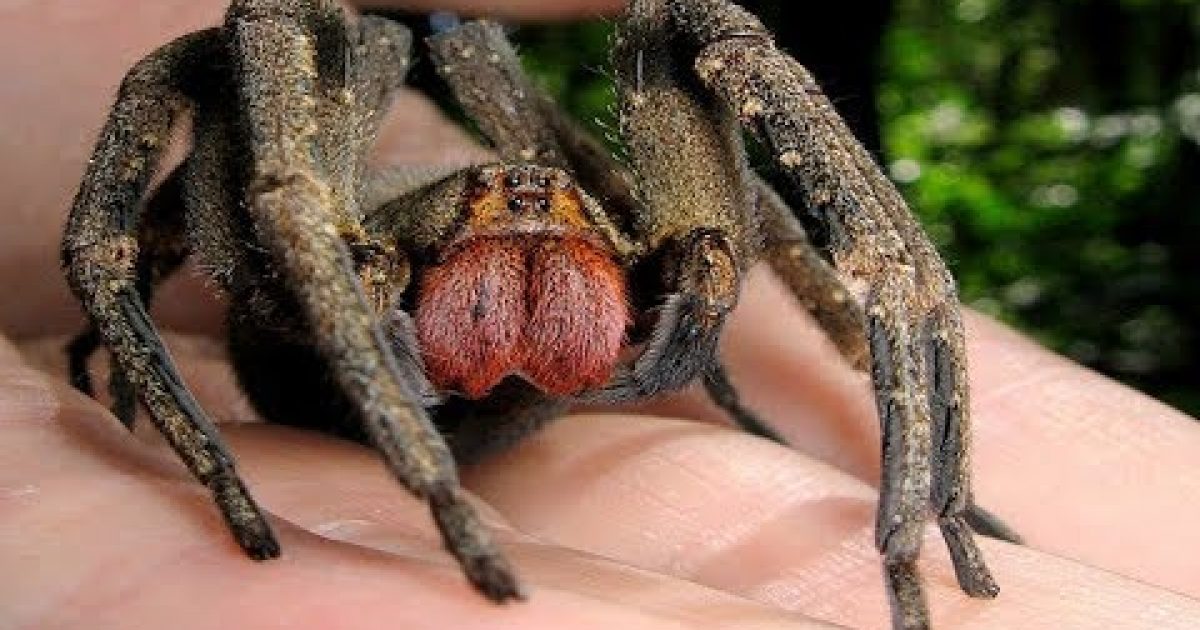 If there is one creature on earth that I can’t stand…it’s spiders. It doesn’t matter what size they are, venous, or not, I just don’t like them. But, the video below showcases 7 really nasty little buggers that are sure to give anyone with arachnophobia, some serious nightmares. So, these are 7 examples of some really nightmarish spiders that you’ll never want to encounter.  The venomous giant spider bites are dangerous to humans. These terrifying, large spiders are all found in nature..and some…might be closer to you than you might think.

Beneath the video I will place a description of each of the spiders that are mentioned in the video. So in the meantime…enjoy the show and try not to get too creeped-out.

7: The Jumping Spider The Salticidae spider family, also called the jumping spider, contains over 600 described genera and over 5800 species. Jumping spiders are usually found in tropical forests, temperate forests, deserts and mountainous regions. One species, called Euophrys omnisuperstes, has been reportedly collected at the highest elevation, on the slopes of Mount Everest. Jumping spiders are easy to distinguish from other genus because of their specific characteristics, such as prominent eyes. Their body length ranges from 0.04 to 0.98 inches. Their front legs are generally larger than the hind, but they depend on their rear legs for jumping, while the front ones are used to assist in grasping prey.

6: The Wolf spider Wolf spiders belong to the family Lycosidae, and are easy to recognize by their robust bodies and prominent shining eyes. They are known for having excellent vision, due to their 8 eight large eyes, arranged in three rows. Flashing a light over the Wolf spider will produce eyeshine. Depending on the genera, their body size can range from 0.4 to 1.38 inches. Wolf spiders are nocturnal and depend on camouflage for protection.

5: Mouse spiders Mouse spiders, scientifically known as Missulena, are medium to large spiders. Their bodies range from 0.39 to 1.20 inches in length. Females are all black, while males have specific colouration, depending on the species. For example, male red-headed mouse spiders are brown or blue-black in color, with bright red-tinged jaws, and male eastern mouse spiders have blue patches. There are 17 known species in the Missulena genus, and all but one are indigenous to Australia. One species may be found in Chile, and the nearest related genera occur in South America.

4: The Sydney Funnel-Web Spider The Sydney funnel-web spider or Atrax robustus is a venomous spider native to eastern Australia. It got its name because it is usually found within a 62 mile radius of Sydney, but also from weaving a tubular burrow retreats lined with silk, with collapsed or open “funnels”. The Sydney funnel-web spider may also be found around the Central Coast of Australia, to the Illawarra region, and west of Sydney, to the Blue Mountains in New South Wales. It is medium to large, its body length reaching up to 2 inches in length. Also, both males and females are darkly colored, glossy, with an almost hairless carapace.

3: Black Widows The Black widow, scientifically named Latrodectus mactans, is a highly venomous species of spider which belongs to the family Therididae, most commonly known as widow spiders. It is native to North America and there are two species: the northern black widow, found in the northeastern United States, as far west as Texas and as far north as Ohio, and the southern black widow, which can be found in the northeastern United States and also Canada, where it ranges in the southern parts of Ontario, British Columbia, Alberta, Manitoba and Saskatchewan. Black widow females are easy to recognize by their shiny black bodies, with the distinctive red hourglass-shaped marking on the abdomen.

2: The Goliath Birdeater The Goliath birdeater spider is a species that belongs to the tarantula family Theraphosidae. It is usually found in northern South America, being native to the upland rain forest regions like Guyana, French Guyana, Suriname, northern Brazil and southern Venezuela. It is a nocturnal species and likes living in deep burrows, marshy or swampy areas. It is known for being the largest spider in the world by size and mass, reaching a body length of up to 4.7 inches and a body weight of up to. 6.2 oz. Its name comes from an 18th-century copper engraving that shows one eating a hummingbird. However, Goliath birdeater spiders prey on adult birds very rarely.

1: The Brazilian Wandering Spider Phoneutria nigriventer, also known as the Brazilian wandering spider, is a species of the venomous genus Phoneutria. It is mostly found in tropical South America, in countries like Brazil, Uruguay, Paraguay or Argentina, and usually like to wander the jungle floor at night, rather than maintaining a web, like most spiders do. While they are active during the night, Brazilian wandering spiders spend their days hiding in dark and moist places near human dwellings. Spiders in the Phoneutria genus can reach a leg span of 5.1 to 5.9 inches, and a body length that ranges from 0.67 to 1.89 inches. Specimens have dense prolateral scopulae – a dense brush of fine hairs – a distinct feature that distinguishes the genus from other related genera.