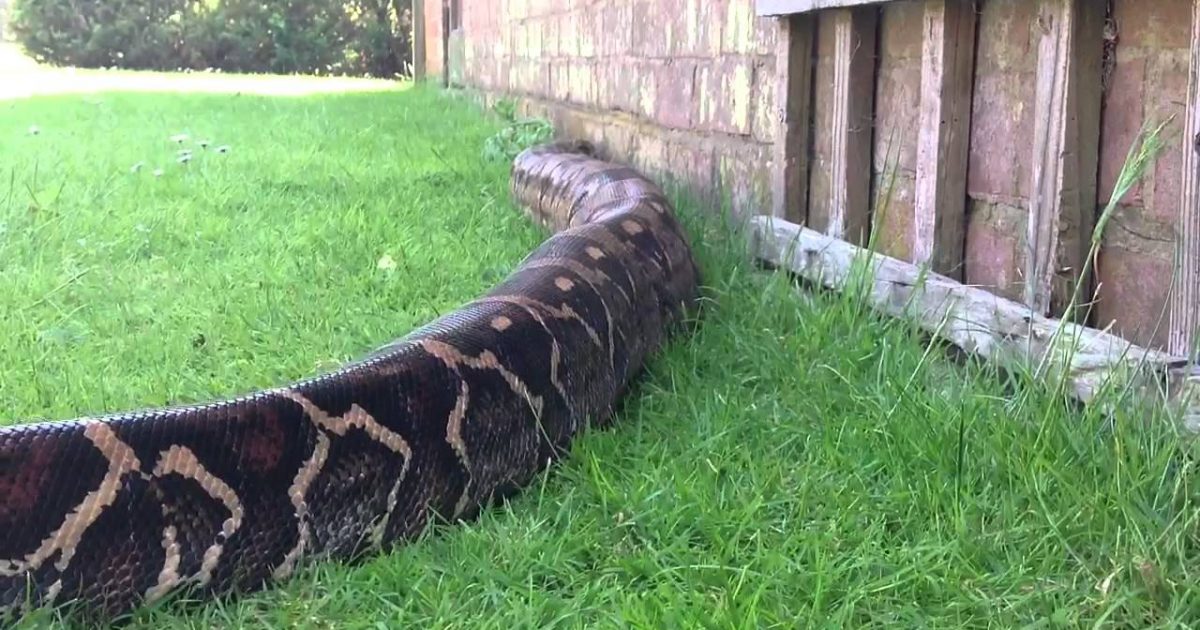 If I were to see something like this slithering through my backyard, I would do one of 2 things: (A) I would call Animal Control, or, (B) grab my Remington 870 12 Gauge shotgun and blow it head off. I’m going on the assumption that the video below was filmed in the southern part of the United States.

Since this particular snake isn’t native to this country, one would think that either escaped from someplace, or, someone didn’t want it as a pet anymore, so they released it into the wild.

Alot of people here in the U.S. think that having an animal like this as a pet is pretty cool, but most folks aren’t prepared when these animals grow to enormous sizes. So, they get scared and instead of taking it to their local zoo, they just release it into the environment. What they don’t understand, is that creatures like this create problems in the local wildlife populations.

Here is some info from pet-snakes.com about that:

Releasing pet snakes into the wild is quickly become a major problem in the United States. The Florida Everglades have become synonymous with the dumping of large snakes such as Reticulated pythons and Burmese pythons. Releasing these non-native species into the wild damages the eco-system and promotes irresponsible ownership. In this article we’ll explore the following:

Reasons snakes are released into the wild
There are any number of reasons that people will release their pet into the wild. The first reason is simply that the snake has grown to large. What started out as a cute 1.5 foot burmese python has over the course of about two years grown to be close to 10 feet of pure muscle. When this happens a few things become evident to some snake owners:

Another reason snakes will often be released is due to a change in the owner’s living situation. Finding a place to live that allows snakes is a difficult task at best (if you tell people you have snakes) and it becomes almost impossible when you try to explain to a prospective landlord that you need three bedrooms because your snake needs a place to live too. A move could be brought on for economic or practical reasons. It’s probably not something you had planned when you got the snake. Even so that doesn’t absolve you of your responsibility to handle the situation correctly.