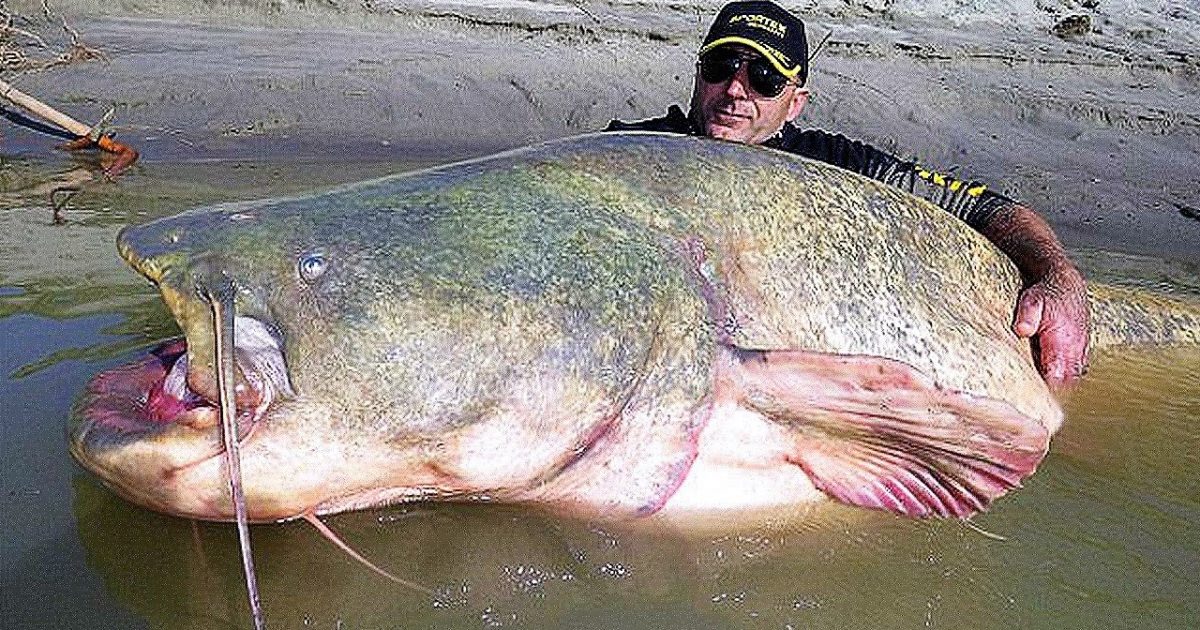 From Greenland sharks, to the Mekong Giant Catfish that was bigger than a grizzly bear, these are 11 BIGGEST Fish Ever Caught !

A 15 foot Greenland shark was reeled in by an angler in a kayak in 2014. Joel Abrahamsson said he trained to capture the massive creature by reeling in 60-pound concrete blocks from a local lake.

Then he strapped himself into a harness attached to his fishing rod in the kayak. He struggled with the Greenland shark for around 90 minutes before finally capturing the 200-year old animal … which was estimated to weigh more than 1,200 pounds!

It’s considered an unofficial record due to kayak fishing records being loosely kept … and the use of estimated weights. The ancient shark was later returned to the water.

To continue reading, scroll down past the video.

A fisherman in Cambodia got a big surprise when he inspected his gill net … A Siamese giant carp that weighed around 100 kilograms (220 lbs) was trapped there! Ironically, the fisherman said he had set his nets in a more shallow area of Cambodia’s Tonle Sap Lake (tone-lee sap lake), where smaller fish are usually found.

Strong currents were thought to have swept the big fish into the shallow area. After noticing a huge tear in the netting, the fishermen alerted authorities to inspect the massive fish.

The carp was later released into a deeper area of the lake. Did you know the Siamese giant carp is considered to be a rare and critically endangered species?

Did you know that fishermen in northern Thailand caught a fish that was the size of a grizzly bear? It happened in 2005, and the creature measured almost 9 feet long (2.7 meters) and tipped the scales at 646 pounds (293 kilograms)!

The species is understandably known as the Mekong (meh-kong) giant catfish … and you can get an idea of just how massive this creature is in these photos by Suthep Kritsanavarin (Soo-threp Krit-zana-var-en). It seems to dwarf the two men who have spread their arms across the creature’s dorsal area … likely to give the viewer a better sense of scale.

The fishermen struggled with the beast for nearly an hour before hauling it in. Eggs were harvested from the fish by Thai Fisheries officials as part of a breeding program … and they later planned to release it.

But the huge fish was instead sold to local villages as food after it died in captivity. Did you know this animal is recognized as one of the largest freshwater fish ever caught?

A pensioner created some controversy when he landed the largest fish ever caught in the British Isles using rod and line. Joe Waldis managed to reel in a bluntnose sixgill shark that measured 12 feet, 9 inches long … and weighed 1,056 pounds!

An angler named Guy Kitakoa (kitta-koe-a) was fishing off Kona, Hawaii in 2015 … when he caught a blue marlin that weighed an incredible 1,368 pounds (or over 620 kilograms)! You can see the huge fish in Mr Kitakoa’s picture.