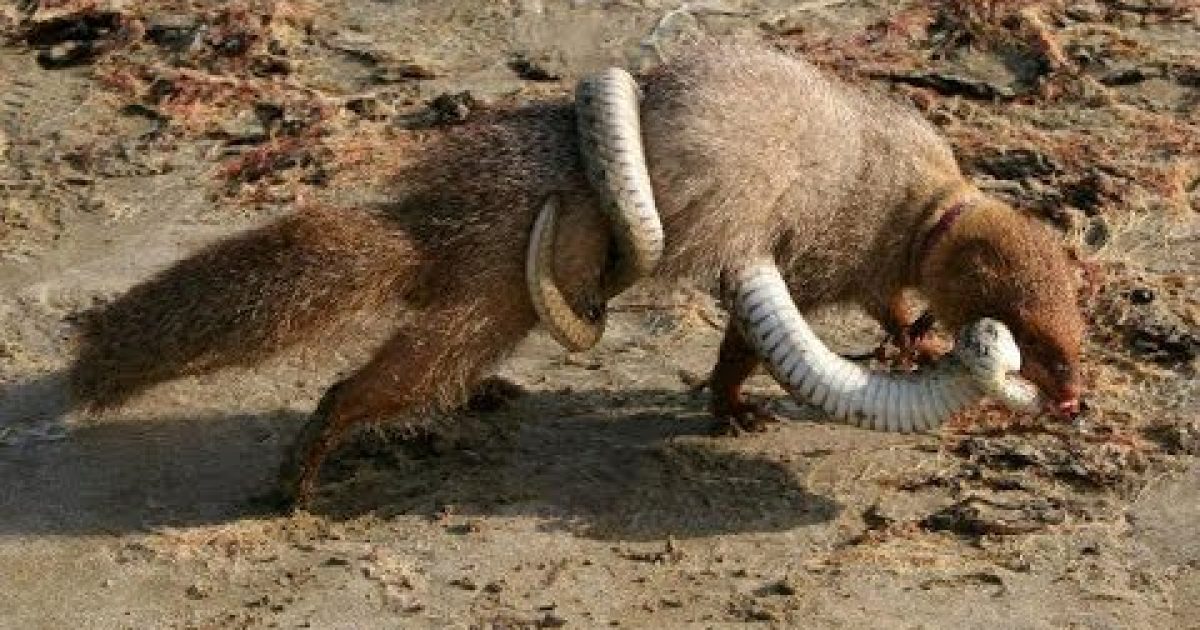 There’s an old saying…”It an’t the dog in the fight…it’s the fight in the dog”. And that certainly comes true here when a mongoose takes-on a king cobra. In this fight there’s going to definitely going to be a winner and a loser…and the loser just might end-up as a meal.

About the King Cobra:

King cobras can reach 18 feet in length, making them the longest of all venomous snakes. When confronted, they can raise up to one-third of their bodies straight off the ground and still move forward to attack. They will also flare out their iconic hoods and emit a bone-chilling hiss that sounds almost like a growling dog.

Their venom is not the most potent among venomous snakes, but the amount of neurotoxin they can deliver in a single bite—up to two-tenths of a fluid ounce—is enough to kill 20 people, or even an elephant. Fortunately, king cobras are shy and will avoid humans whenever possible, but they are fiercely aggressive when cornered.

King cobras live mainly in the rain forests and plains of India, southern China, and Southeast Asia, and their coloring can vary greatly from region to region. They are comfortable in the trees, on land, and in water, feeding mainly on other snakes, venomous and nonvenomous. They will also eat lizards, eggs, and small mammals.

The mongoose is notorious for one fascinating fact – their astounding ability to battle and kill some of the deadliest creatures on Earth. Native to India, the King cobra is the largest venomous snake in the world, capable of reaching a length of 20 feet and a weight of over 35 pounds. A bite from a King cobra can kill an adult human being in less than 30 minutes.
In the wild, there are only 2 things a King cobra must fear, people and mongooses. The mongoose is a constantly active hunter and forager that eats a wide variety of small prey animals and loves snakes in particular. All species of mongoose eat snakes regularly, but the slender mongoose and the grey mongoose are the two species most likely to confront and devour a King cobra.