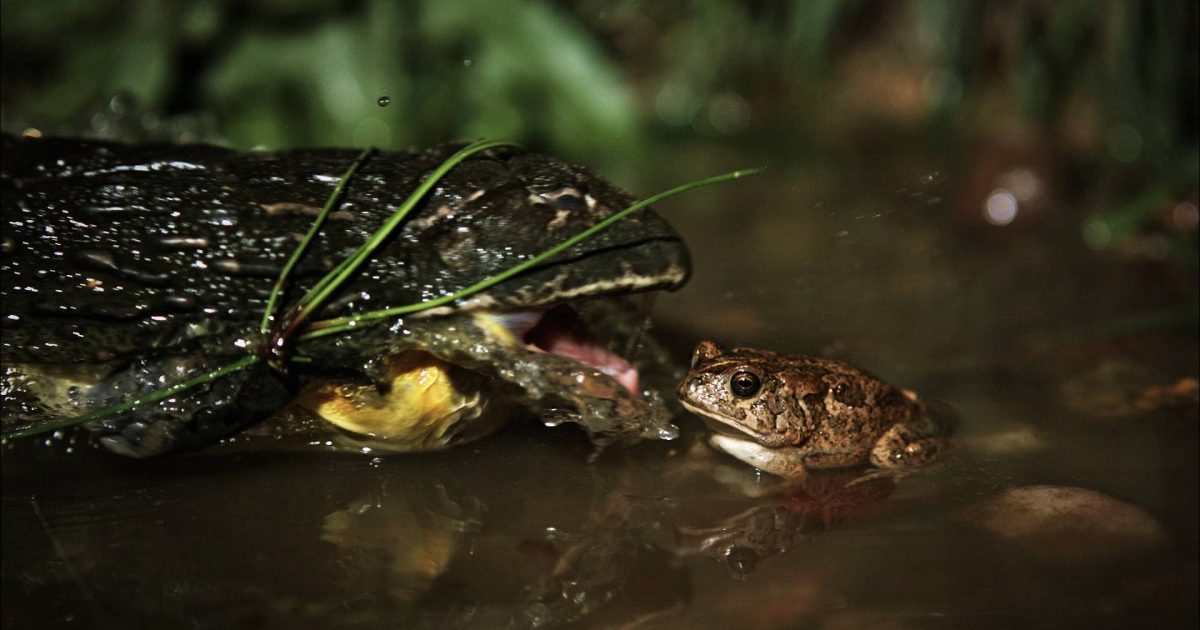 In Africa, there is always a life and death struggle going on almost everywhere you look. In this particular instance, we see a toad waiting patiently for some hapless creature to cross it’s path, when suddenly the toad takes-off. The amphibian just happened to see a forest cobra zeroing in on him and makes a quick get away.

Considering the different species in the video below, I’m going on the assumption, that this drama was being played-out in the African Congo. Here are the three actors in this drama- the African Common Toad, the Forest Cobra and last (but surely not least), is the African bullfrog. While the forest cobra certainly would have no trouble snatching-up the smaller toad, but even to cobra would have to think twice squaring-ff against a fully grown African bullfrog.

Here is a little background on our three players courtesy of Wikipedia:

The African Common Toad is a large sturdy toad with a warty skin. Males grow to a snout-to-vent length of 62 to 91 mm (2.4 to 3.6 in) and females reach 70 to 130 mm (2.8 to 5.1 in). The paratoid glands are large and either parallel or kidney-shaped and the male has a single vocal sac under the chin. The dorsal surface is dark olive-brown with dark patches on the back, often arranged fairly symmetrically, and in younger animals, there is a paler band along the spine. There are smaller dark blotches on the upper lip and the eyelids, and the warts on the flanks are often separated by dark markings.

The Forest Cobra is of medium build, but becomes robust and thick set in specimens over 1,5m. Rears up high and spreads a long narrow hood. The head is distinct from the neck. Large specimens have very broad heads with bulging temporal muscles. This cobra can reach lengths of 2,7 m. Normal length is 1,5 to 1,8m. Any specimen over 1,8 m is an impressive sight. The front part of the body is a light yellowish-brown, to bronze, gradually darkening towards the tail, which is black. This large cobra has fixed front fangs. This snake does not spit its venom.

The African bullfrog is a voracious carnivore, eating insects, small rodents, reptiles, small birds, and other amphibians. It is also a cannibalistic species — the male African bullfrog is known for occasionally eating the tadpoles he guards. An African bullfrog kept at the Pretoria Zoo in South Africa once ate 17 Juvenile Rinkhals Snakes (Hemachatus haemachatus). They emit a loud croaking and a bleating sound when stressed or handled. It is one of the three frog species that have sharp teeth and bite humans when provoked or handled; the other two are Pacman frogs and Budgett’s frogs.

Now, since all of the players have been identified…it’s time to sit back and watch this drama unfold.