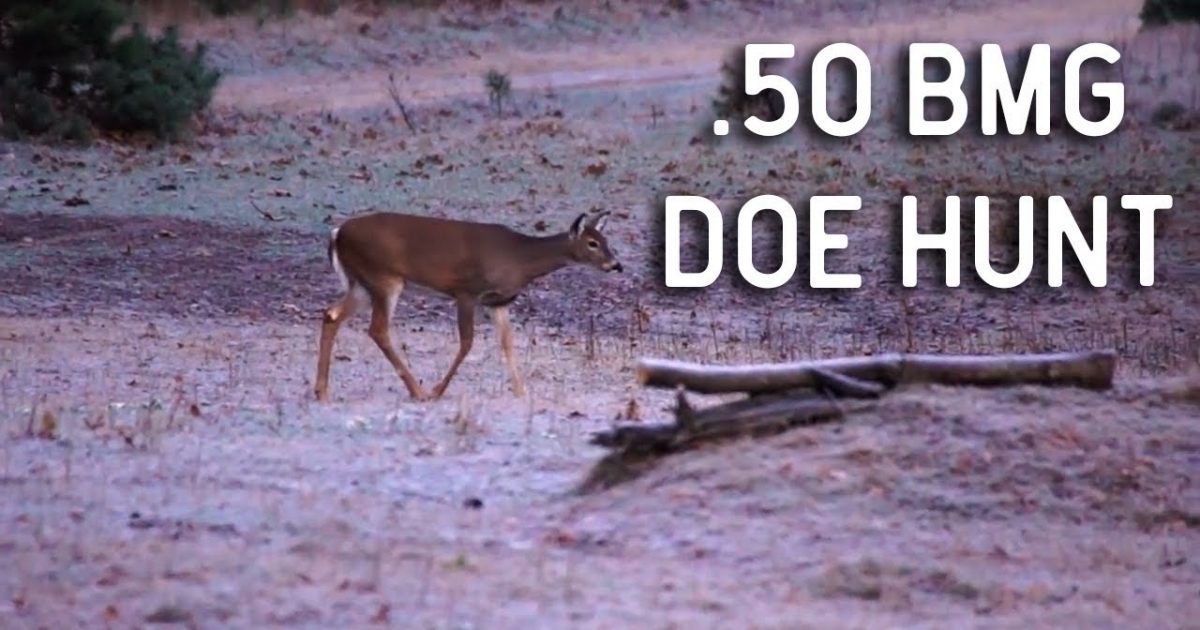 I came across this video on YouTube and I thought, ‘Hmmm now this might be interesting’. Who on earth would want to kill a doe (let alone any deer for that matter) using a .50 caliber rifle? One hit from that rifle, using that ammunition, would simply DESTROY the animal…especially a small doe. I mean, what’s the point? So I sat back and watched the entire video,  after all, it has over 1.7 million views on YouTube, so alot of people have seen it.

So, I thought, ‘what the heck’ and I sat down and watched it from beginning to end.

Now, I don’t want to give the ending away, but after seeing what transpired, I will say that I was completely surprised, and taken aback.  Like I said, I won’t spoil the ending for you, but I’m sure you’ll be just as shocked and surprised as I was.  Beneath the video I will make available a list of several of the .50 cal rifles that are available for sale.

Here are just a few of the types of heavy duty rifles that fire the .50 Caliber round that are available for sale:

With surprisingly low recoil, the Barrett Model 82A1 is a semi-automatic rifle with years of harsh military service behind it that prove its reliability of the design. Barrett also offers the similar semi-auto M107A1. (barrett.net; 615-896-2938)

Introduced in 2014, the BA 50 is a bolt-action rifle that retains the ejection port on the right side of the gun but moves the bolt handle to the left. It disassembles like an AR-15 for cleaning. (bushmaster.com; 800-998-7928)

The Hard Target Interdiction (HTI) rifle from Desert Tech is a bullpup design, giving the gun a full 29-inch barrel while keeping the overall length less than 46 inches. This keeps the overall package short for better handling without sacrificing ballistic performance. (deserttech.com; 801-975-7272)

The MK15 SLAM (Snipers Light Anti-Material), a descendant of the U.S. Navy Surface Warfare MK15, is a match-grade rifle that uses the McMillan TAC-50 action mated with a Strike Dual chassis. With a folding stock and a 17.5- or 26-inch barrel, the MK15 is very portable. (drakeassociates.us; 631-749-1100)

The Windrunner M96 rifle from EDM Arms is a bolt-action rifle that uses a removable barrel to break down into an easy-to-carry package. The disassembly and reassembly process takes less than a minute and requires no tools. (edmarms.com; 928-636-0675)

The latest TAC-50 rifle, the A1-R2, is a bolt-action gun fitted with a special hydraulic piston in the buttstock and a proprietary muzzle brake to reduce peak recoil by 90 percent. These rifles can be configured for both right- and left-handed shooters. (mcmillanfirearms.com; 800-401-7269)

Fed by a detachable five-round magazine, the R50 is a bolt-action rifle that is available with barrel lengths from 18 to 29 inches. Single-shot rifles are also available from Safety Harbor Firearms. (safetyharborfirearms.com; 727-726-2500)

The BFG-50A is a gas-operated, semi-automatic rifle that comes standard with a 26-inch barrel, a Shark Brake muzzle device and a Serbu bipod. The rifles use 10-round, M82-type detachable magazines. (serbu.com; 813-243-8899)

The SuperComp Ferret50 is a single-shot, bolt-action rifle that can be made with either a right- or left-handed bolt for no additional charge. Spider Firearms also makes .50 BMG conversions for AR-15 lowers. (ferret50.com; 407-957-3617)

An updated version of the original HS .50, the M1 adds a five-round magazine, side Picatinny rails and a newly designed bipod. The 33-inch barrel is capped with a high-efficiency muzzle brake. (steyrarms.com; 205-417-8644)