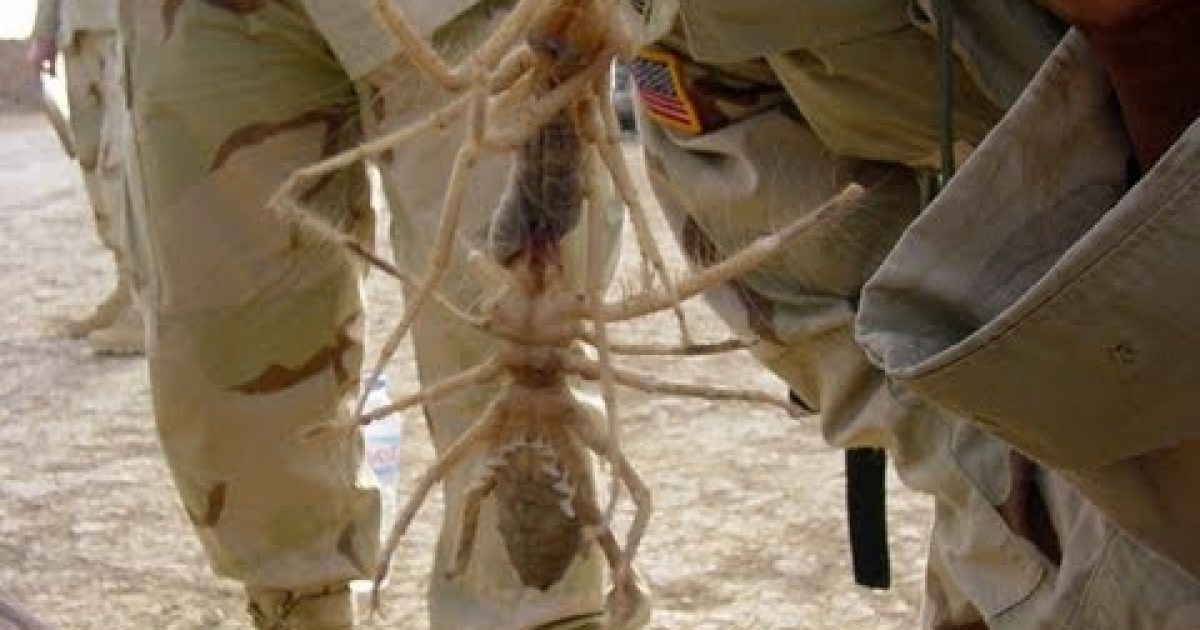 Even though I was well into my 50’s when the last Gulf War started, I still tried to re-enlist in the U.S. Army to go serve my country in Iraq, in it’s time of need, but the recruiter told me I was too old. But after a couple of years had gone by, I started hearing stories of ‘giant camel spiders’. I thought,“How big can they be, these are just ‘stories’ right?” Well, they weren’t just ‘stories’ as you can plainly see in the video below. I wouldn’t have minded being shot at….but ‘giant’ spiders…that takes things to a whole new level.

The giant camel spider, one of the worlds biggest spiders, lives in desert environments and comes from the Solifugae order of animals in the arachnid class.Arachnids are joint-legged invertebrates that have eight legs and comprises over 100,000 named species including spiders, scorpions and ticks.
Also known as wind scorpions, and sun spiders, the Giant Camel Spiders are angry looking and imposing in size with some species growing up to 12 inches in length is non-venomous.
However, with its powerful jaws, it is capable of inflicting an extremely painful bite.
Their bizarre appearance can be startling to some, making them the subject of many urban legends including a 2004 email hoax with the infamous picture of soldiers in Iraq holding two fighting camel spiders.
They live in warm and arid habitats, and are omnivorous, primarily feeding on ground dwelling arthropods such as darkling beetles and termites. But they have also been known to feed on snakes, rodents and as seen in this video, small lizards.
The male camel spider flings the female on his back to transfer sperm and fertilize the eggs. The female then lays up to 200 eggs, typically only producing one brood of offspring a year. Compared to other invertebrates, the camel spider is fast on land with a top speed estimated at 10mph, approximately 1/3 as the fastest human sprinter.
Although relatively harmless, I would still not like to cross paths with this beast straight out of a 50’s b-horror movie.
Facebook Twitter