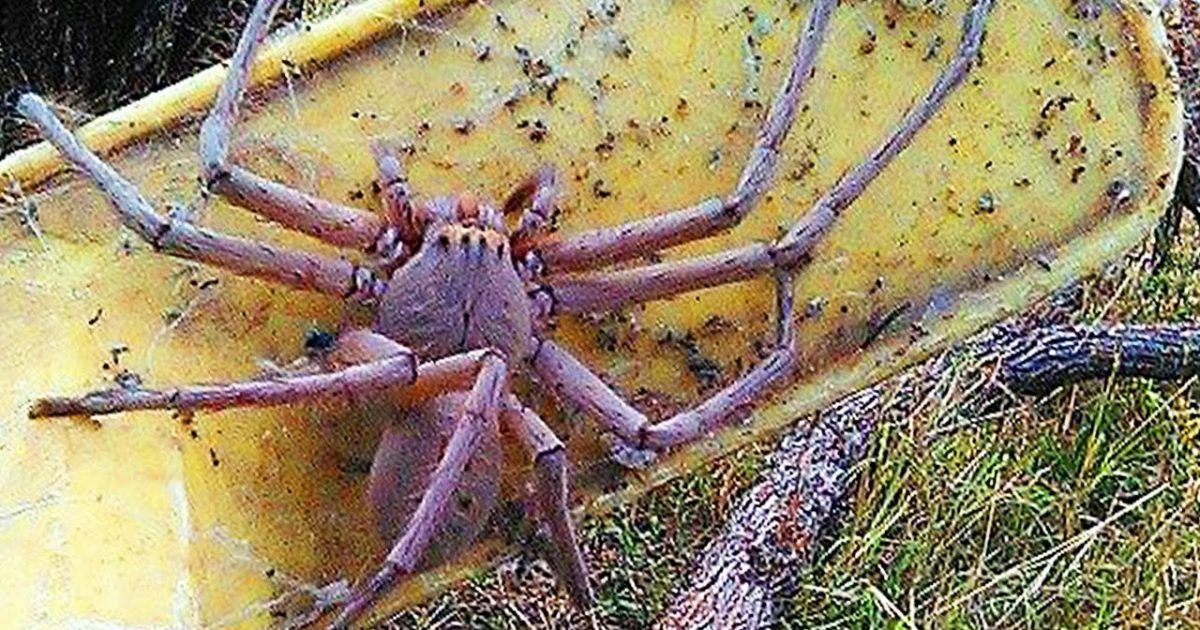 If you are one of those folks that suffer from arachnophobia , then maybe you should pass this particular article by. But, if you’re a brave soul, then by all means, take a few minutes to read and then, scroll on down to the video. But remember, what you’re about to see, you can never un-see. I’m not a big fan of spiders, they’re creepy, nasty and down right evil-looking insects.

To my mind, they are the embodiment of the definition of what evil is. Hmmm, I guess you could even say that yes, I’m a little arachnophobic. But in my own defense, when I do see a spider, I certainly don’t jump on a chair, or run screaming out of the room, my first instinct to to kill the little beasties. I guess I should be grateful that I don’t live in any of the countries mentioned in the video below, because then I’d have to carry a pistol with me where ever I went.

Since there are far too many, I’ll list about half of the spiders mentioned in the video beneath it for you reading pleasure. Okay, if you’ve gotten this far, then you’re a brave soul, so without further adieu…enjoy the video. But remember what I told you, once you’ve seen these critters, you can never un-see them.

# 8 Egyptian Giant Solpugid
Myths and rumors surround the Egyptian Giant Solpugid, also known as the Camel Spider. In the early 2000s, the Camel Spider earned a reputation for being these huge creatures terrorizing American Soldiers stationed out in Iraq. People claimed the spiders were capable of running 40 miles per hour, could make loud hissing noises, and even capable of producing a paralyzing neurotoxin. While none of these are completely true, the Camel Spiders are pretty large, commonly measuring 6 inches in length. These ferocious arachnids use their jaws to eat almost exclusively as carnivores. They’re not necessarily terrorizing any soldiers, but they are still pretty big and bad.
# 7 Desertas Grande wolf spider
The Desertas Grande wolf spider is largely considered to be one of the largest wolf spiders in the world. They are native to the Deserta Grande Island in the Madeira archipelago. These wolf spiders are downright monstrous, as large as a dinner plate, measuring more than 5 inches in diameter. The spiders are endemic to the island they were discovered on, but they have become rarer and rarer sights in the wild. They are currently considered critically endangered, which might be good news for you spider-haters out there
# 6 Theraphosa blondi
The Theraphosa blondi, better known as the Goliath Bird-eating spider. This giant spider doesn’t usually eat birds actually, but it is still pretty large, capable of eating normal things like insects but also rather large creatures like frogs and rodents. It has fangs long enough to pierce human skin, and while it’s venom is nonlethal to humans, we would forgive you if it scares the bejesus out of you since it is the largest spider in the world by mass. It has leg spans of up to 4 inches, but it weighs a hefty 1/4th of a pound.
# 5 Colombian Giant Black Tarantula
The Colombian Giant Black Tarantula, known scientifically as Xenesthis monstrosa has a leg span of up to 9.1 inches, and it lives up to its name. It’s known for being particularly aggressive, hunting down its prey for sustenance. While they look like the final beast in the climax of a horror movie, they are apparently completely harmless to humans. Or maybe that’s just what they want you to believe.
# 4 Heteropoda maxima
Just in case you needed another reason to avoid dark caves: here’s the Heteropoda maxima, better known as the Giant Huntsman spider. This creepy crawly was first discovered in a Laotian cave in 2011 during a survey of the Greater Mekong subregion. It has the world’s longest leg span for a spider, measuring an entire foot across. It probably won’t help anyone’s arachnophobia to know this, but it’s large legs aren’t just for creepy decoration. The Huntsman uses their legs to hunt and stalk prey with optimal efficiency.
# 3 Phoneutria nigriventer
The Phoneutria nigriventer has a terrifying set of huge mandibles and a big meaty body that makes it’s half foot diameter leg span just scary icing on an even scarier cake. While the Phoneutria nigriventer, better known as the Brazilian Wandering Spider, is definitely one of the world’s biggest spider, it’s probably more notorious for its deadly neurotoxin that could kill a human. They have a reputation for hiding in banana plants and dancing back and forth with it’s legs up when threatened. Their little dance might even be considered cute, if you didn’t know they were getting ready to spray you with venom.
# 2 Brazilian Giant Tawny Red Tarantula
This South American creature is native to Brazil, Uruguay, Paraguay, and Argentina, another titan in the world of arachnids. The Brazilian Giant Tawny Red Tarantula is more than 10 inches in diameter and, unlike most spiders, don’t leave their hundreds of spider babies alone after they are born. If you think you’re safe from seeing these terrifying things in your day to day life, think again. They’re pretty popular pets in ALL parts of the world.
# 1 Mongolarachne jurassica
The Mongolarachne jurassica is an extinct spider from the Jurassic era and still has living relatives to this day in the modern golden orb weaver. The Mongolarachne Jurassica is possibly the biggest ancient spider that used to crawl around on this earth. The fossils we have found of the Mongolarachne jurassica are currently the largest and oldest spider fossils ever discovered, measuring around 6-7 inches in length.
Facebook Twitter