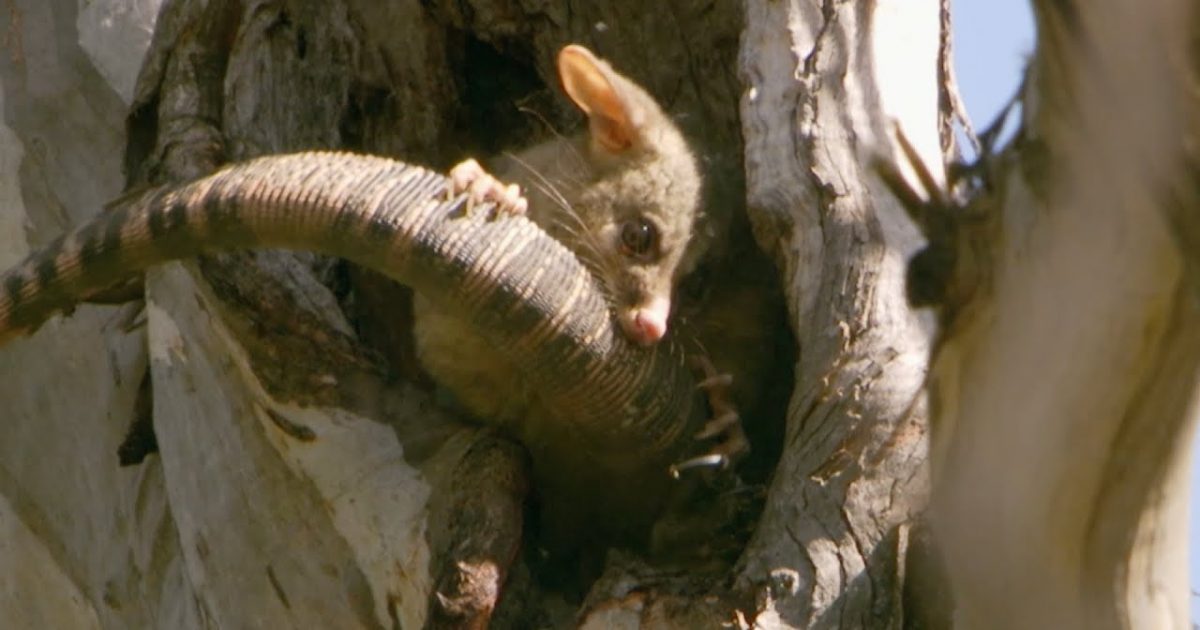 Facebook Twitter
In most instances when we see a documentary involving mammals and reptiles, the normal human response it to root for the mammal. Since we share that common warm-blooded bond, we naturally tend to root for our own. We naturally tend to be repulsed by snakes , lizards and other reptiles (cold blooded animals). Also, most reptiles (and rightfully so), tend to represent something rather sinister. We tend to think of them as mindless, soulless, Killers, constantly hungering for warm blooded animals, who have no problem with devouring any mammal it comes across, or even other reptiles.
Here are the two players in the drama below:
The common brushtail possum is a nocturnal, semi-arboreal marsupial of the family Phalangeridae, it is native to Australia, and the second largest of the possums. Like most possums, the common brushtail possum is nocturnal. It is mainly a folivore, but has been known to eat small mammals such as rats. In most Australian habitats, leaves of eucalyptus are a significant part of the diet but rarely the sole item eaten. The tail is prehensile and naked on its lower underside.
There are four colour variations: silver-grey, brown, black, and gold. It is the Australian marsupial most often seen by city-dwellers, as it is one of few that thrives in cities, as well as a wide range of natural and human-modified environments. Around human habitations, common brushtails are inventive and determined foragers with a liking for fruit trees, vegetable gardens, and kitchen raids.
And here is the villain:
Although averaging 1.5 meters in length, the Lace Monitor has been known to grow to 2 meters. Its coloring is typically dark blue with many scattered cream, yellow or white scales. Larger spots or blotches may also be formed by groups of scales. There is also the “Bells” form which is found along the Australia’s east coast and central regions, and its color difference is marked with broad yellow and black cross-bands.
All Lace Monitors have toes equipped with long, strong claws, which are used for climbing and digging. Their tails are extremely long and are usually almost twice the length of the monitor’s head and body. The Lace Monitor is found along the East Coast of Australia inhabiting forests and coastal tablelands. The Lace Monitor feeds upon birds, insects, reptiles, small mammals and carrion. It also actively forages for nesting birds’ eggs.
Now, regarding our story, it’s a typical one that is played-out in Australia almost every single day, the reptile searches for “food” and the mammal tries not to become a meal. Sadly, in this case, it the possum’s babies the the monitor lizard wants and even though the female Possum does her best, the reptile barges through her defenses and devours all of her offspring…a sad ending to be sure.
Facebook Twitter