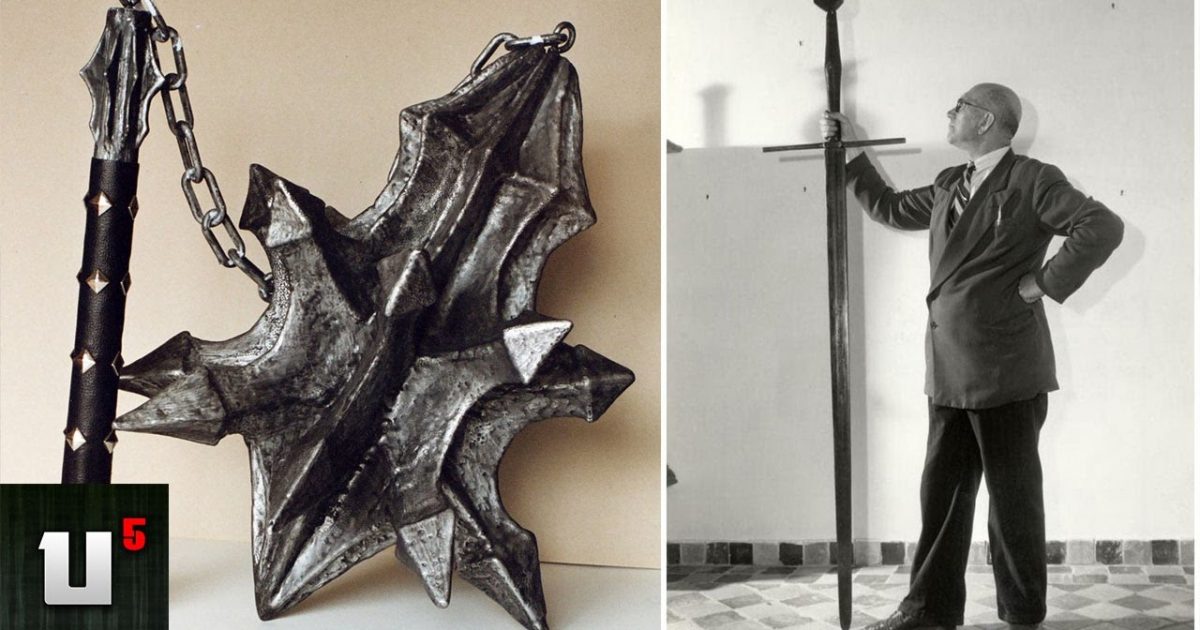 Facebook Twitter
Human history is filled with conflict and warfare. As the centuries passed, and the body count increased, the human creative spirit was put towards coming up with new and deadly weapons that could solve problems encountered on the battlefield.
Whether filling the need to defend a castle, overcoming advanced plate armour, or defeating ingenious new battle tactics, these new weapons would be designed to be as brutal and terrifying as possible, not only being capable of giving enemies a vicious death, but also intimidating them, in an effort to eek out whatever advantage they could.
Here are some choices for 5 of the most brutal and intimidating historical weapons.
5. Boiling Oil: Early thermal weapons were devices or substances used in warfare during the classical and medieval periods (approx 8th century BC until the mid-16th century AD) which used heat or burning action to destroy or damage enemy personnel, fortifications or territories. Incendiary devices were frequently used as projectiles during warfare, particularly during sieges and naval battles; some substances were boiled or heated to inflict damage by scalding or burning. Other substances relied on their chemical properties to inflict burns or damage. These weapons or devices could be used by individuals, manipulated by war machines, or utilized as army strategy. The simplest and most common thermal projectiles were boiling water and hot sand, which could be poured over attacking personnel. Other anti-personnel weapons included the use of hot pitch, oil, resin, animal fat and other similar compounds. Smoke was used to confuse or drive off attackers. Substances such as quicklime and sulfur could be toxic and blinding.
4. Scythe: A war scythe, or military scythe, is a form of pole weapon with a curving single-edged blade with the cutting edge on the concave side of the blade. … As an infantry weapon, the military scythehad practical applications both in offensive actions against enemy infantry and as a defensive measure against enemy cavalry.
3. Zweihänder: The Zweihänder is a large two-handed sword primarily in use during the early decades of the 16th century. Zweihänder swords developed from the longswords of the Late Middle Ages and became the hallmark weapon of the German Landsknechte from the time of Maximilian I (d. 1519) and during the Italian Wars of 1494–1559. The Goliath Fechtbuch (1510) shows an intermediate form between longsword and Zweihänder.These swords represent the final stage in the trend of increasing size that started in the 14th century. In its developed form, the Zweihänder acquired the characteristics of a polearm rather than a sword due to their large size and weight and therefore increased range and striking power. Consequently, it was not carried in a sheath but across the shoulder like a halberd.
2. The Mace: A mace is a blunt weapon, a type of club or virge that uses a heavy head on the end of a handle to deliver powerful blows. A mace typically consists of a strong, heavy, wooden or metal shaft, often reinforced with metal, featuring a head made of stone, copper, bronze, iron, or steel. The head of a military mace can be shaped with flanges or knobs to allow greater penetration of plate armour. The length of maces can vary considerably. The maces of foot soldiers were usually quite short (two or three feet, or seventy to ninety centimetres). The maces of cavalrymen were longer and thus better suited for blows delivered from horseback. Two-handed maces could be even larger.
1. The War Elephant: A war elephant is an elephant that is trained and guided by humans for combat. The war elephant’s main use was to charge the enemy, breaking their ranks and instilling terror. Elephantry are military units with elephant-mounted troops. War elephants were first employed in India, the practice spreading out across Southeast Asia and westwards into the Mediterranean. The Macedonian ruler Alexander the Great confronted Persian war elephants during his conquest of the Achaemenid Empire, and again faced war elephants during his Indian campaign (327-325 BC). Their most famous uses in the West were by the Greek King Pyrrhus of Epirus during the Pyrrhic War (280-275 BC) in Roman Italy and by the armies of Carthage, including by Hannibal during the Second Punic War.
Facebook Twitter