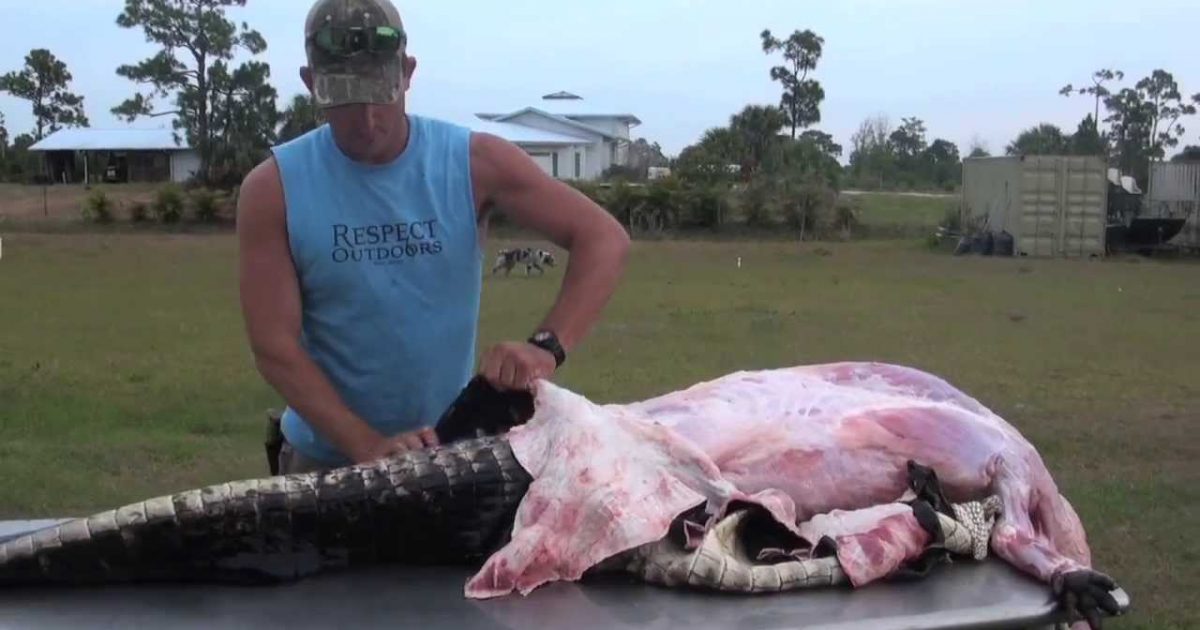 For those folks that live in the south, eatin’ critters is something just about everyone does (‘Real Southerners’ that is). And everyone has a Grandma that can cook just about everything, whether is walks, crawls , swims, or slithers on it’s belly.

An alligator, while repellent to everyone who’s NOT a Southerner, is something you go to a zoo to see and it’s NOT something any self-respecting Yankee would put on their table for Sunday supper. Well, ya’ll are about to get an education. I’ll place the written part of the instructions beneath the article.

It has been described as a healthy meat source for humans due to its overall composition and for being low in fat and high in protein. Alligator meat has been described as having a mild flavor and a firm texture. It tastes like chicken, with a mildly fishy flavor, and is often chewy, depending on preparation.

Alligator meat is quite unique, compared to other popular meats such as chicken, beef and fish. It is categorized as game meat, which is naturally lean in fat and dense in protein. It also has similar properties with that of fish and chicken, in term of taste and saturated fat amount. Last but not least, it is considered to be a direct contender to beef, because of its high-quality protein amount.

Turns out, the saturated fat amount in alligator meat is far, far lower than those in beef, which is 4 grams per 3.5-ounce of alligator meat serving compared to 14 grams in similar serving of beef. Which is quite healthier being consumed as daily protein sources.

To be fair, alligator meat can be prepared the same way the meat of other sources can. However, the widely established advices are that alligator meat should be cooked lightly.

START WITH A SHARP KNIFE

Whenever you skin anything, having a good sharp knife is not only critical to making the job easier but also keeping you safe. You’re more likely to cut yourself on a dull knife than a sharp one. It’s a good idea to also keep on hand a steel sharpening plate.

USE A RAZOR BLADE

For skinning the gator you’ll want to use a typical hunting knife, but for cutting off the tough scoots that line the top of the animal you’re going to want to use a razor blade or box cutter.

Alligator skin is a little more attached to the flesh than you might find in say a deer. Using compressed air with a nozzle inserted at the gator’s wrist is a good way to partially separate the hide from the flesh making it easier to skin. Once it’s inflated you can more easily insert your knife.

CUT AROUND THE SCOOTS

Next use the razor blade to cut around the top of the scoots and down each of the legs. Now you’re ready to start skinning.

Using a sharp hunting knife, begin to slowly cut the skin away from the flesh, barely using any pressure toward the hide being careful not to nick it. With experience you’ll begin to know which parts of the hide requires extra sensitivity.

It’s a good idea too to know which parts of the hide are most sought after. The belly skin is the most utilized portion of the hide for leather goods with the skin directly under the chin as the most valuable. Pay extra attention to cut these sections away cleanly without any nicks.

FLESH OUT THE MEAT

Now that the skin has been completely removed, it’s time to salvage some meat. The best meat you’ll find on a gator is in the tail and the jaw. Meat around the tail can be removed similar to the way you would a backstrap on a deer, running your knife down along the bone.