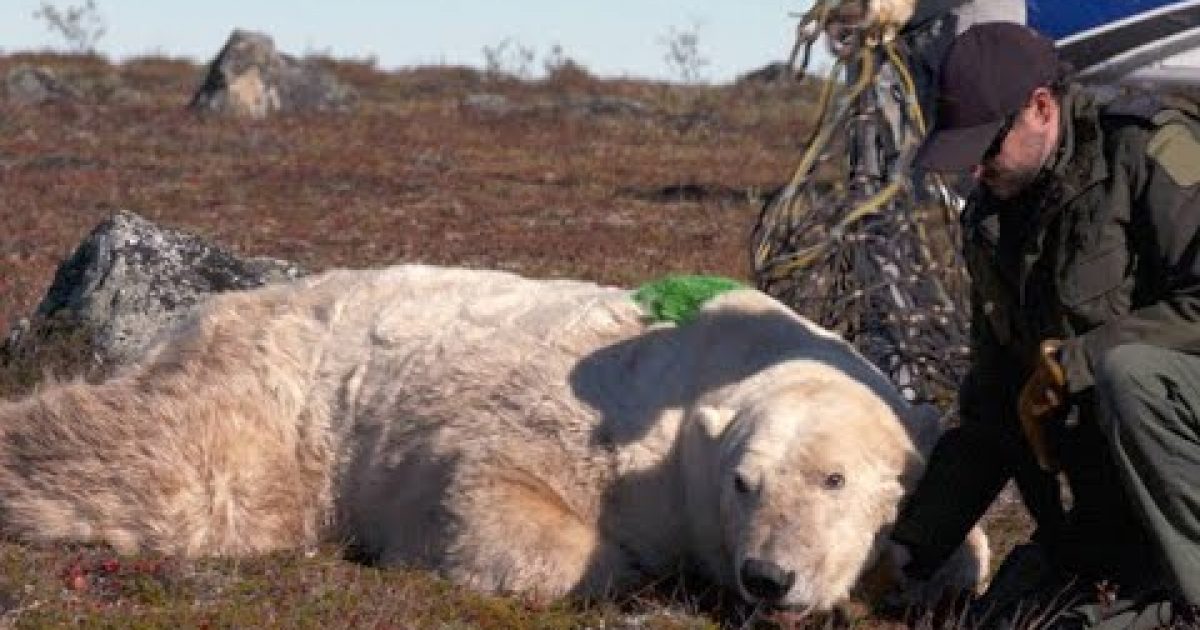 Interestingly enough, this particular capture was made in the town of Churchill, Manitoba in Canada. Churchill is also known as “Polar Bear Town”, due to the large numbers of polar bears that come into the town during the ice melt during the summer and most of them are looking for food.

In the fall, Churchill, Manitoba swells from a tiny town of 800 to one of 10,000–and all the new visitors are here to see 1,000 majestic, migrating polar bears. The business of being a bear guide is more difficult than ever, but veteran experts are determined to give the tourists the up-close experiences they want. Conservation officers are trying new tactics to help keep both the bears and people in town safe.

In the video below, a marauding polar bear is about to be returned to the the wild, as far away as possible from the town of Churchill. To do that, the conservation team will need to tranquilize him, and then airlift him by helicopter.

Churchill is situated at the estuary of the Churchill River at Hudson Bay. The small community stands at an ecotone, on the Hudson Plains, at the juncture of three ecoregions: the boreal forest to the south, the Arctic tundra to the northwest, and the Hudson Bay to the north. Wapusk National Park is located to the east of the town.
The landscape around Churchill is influenced by shallow soils caused by a combination of subsurface permafrost and Canadian Shield rock formation. The black spruce dominant tree cover is sparse and stunted from these environmental constraints. There is also a noticeable ice pruning effect to the trees. The area also offers sport fishing. Several tour operators offer expeditions on land, sea and air, using all terrain vehicles, tundra buggies, boats, canoes, helicopters and even ultralight aircraft.
Like all northern communities in Canada, Churchill can sometimes see the Aurora Borealis (Northern Lights) when there is a high amount of solar activity. Visibility also depends on the sky being dark enough to see them, which usually precludes their visibility in the summer due to twilight all night long.
Facebook Twitter