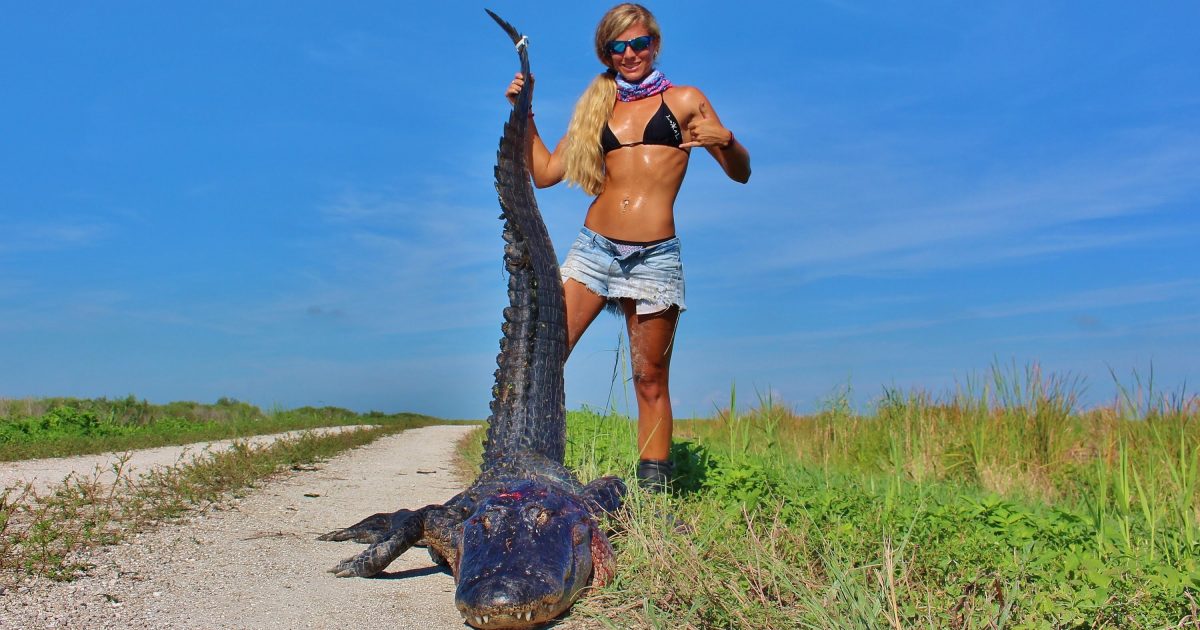 Facebook Twitter
This should be quite the treat for all of you who follow Darcie, better known as ‘Darcizzle’. Watch as she goes on an adventure into the Florida everglades in search of these armored predators we call alligators. See Darcie land a big alligator with a “bangstick” in this YouTube episode of ‘Darcizzle Offshore’.
For those of you who may not know, historically, unregulated hunting led to a dramatic decreases in alligator populations. In 1973 the American alligator was listed as endangered under the Endangered Species Act of 1973. Since the species’s recovery, alligator hunting programs have been established in the majority of U.S. States in the alligator’s habitat range.
The main products of alligator hunting are alligator meat and skin. Alligator skins have been harvested since the 1800’s. Alligator skin was used in the manufacture of boots, belts, and saddles. In the early 1900’s some states began the commercial tanning of alligator skin.
The increased popularity of alligator leather lead to the rise of alligator farming, now a $60 million industry. Following the global economic recession of 2008, demand for wild alligator skins declined dramatically. In the state of Louisiana the number of reported skins dropped from 35,625 to 9,139 in one year.
The use of a hook and line is the most common method. It involves securing a sturdy hook and line to a tree or pole in the ground. The hook is commonly baited with fish or chicken quarter. After the bait is taken, the hunter returns to draw in and dispatch the gator. Allowed methods of hunting vary by state, in South Carolina an alligator must be captured before being killed with either a handgun or ‘bangstick’.
A bangstick is a simple tool for a not so simple task: the elimination of a dangerous predator in the water on contact. To sketch out the broad strokes, it’s a pole, with a stainless steel chamber attached to it that holds a live round of ammunition over a fixed firing pin.
Facebook Twitter