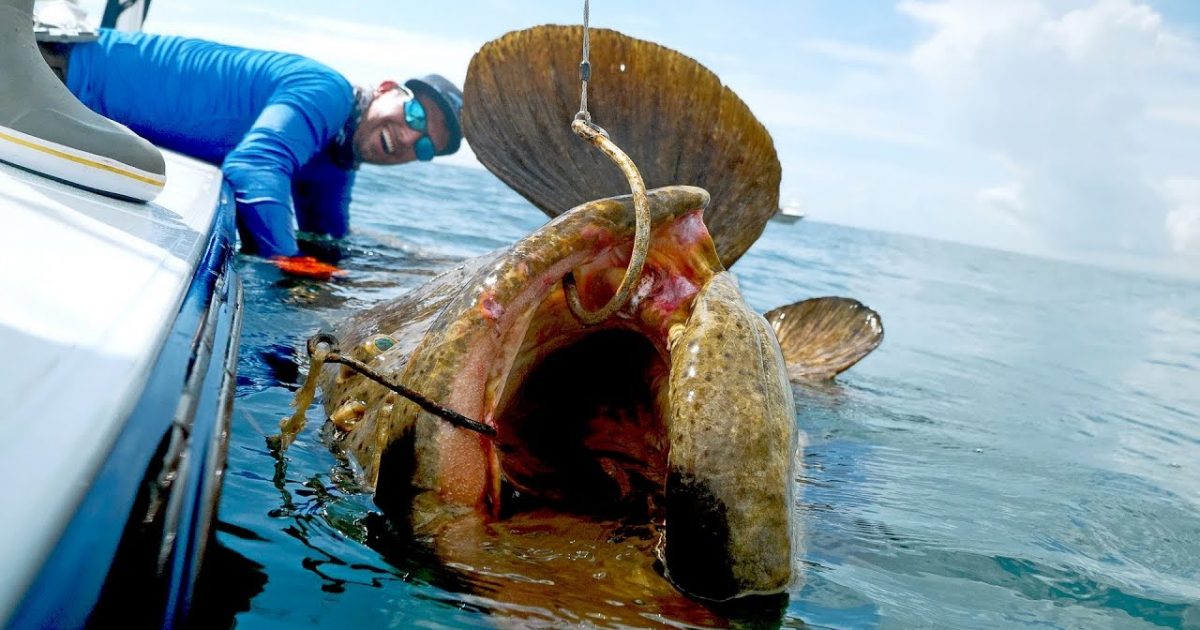 If I had to rate the majority of the fishing videos I’ve seen during my career as a journalist, I would definitely rate the video below, in the “Top 5”. It’s one thing when you see a huge great white shark, that’s why they get their name “great”, because they are truly some of the largest fish on the planet. But when it comes to fish like the Goliath grouper…they are almost in a class all by themselves. They are called “Goliath” for a good reason , they’re HUGE!

The Atlantic goliath grouper (also known as the “Jewfish”), like most groupers, is an ambush predator and eats fairly large fishes and invertebrates and even small sharks.  Reefs with large numbers of predators, like Atlantic goliath groupers, are known to be healthier than reefs with no predators, so this species may represent an important part of the reef food web.

Atlantic goliath groupers feed by swallowing their prey whole; they do not chew.  They use their very large mouths to create enough negative pressure to suck in whole fishes or large invertebrates, and they swallow them quickly and efficiently.

The guys that posted this video to YouTube had this to say about their adventure:

“Max and I left the dock with one fishing mission, catch and release a Goliath Grouper that weighed more than his boat! The total weight of the boat hull is 550lbs, so we needed to find one of the largest Goliath Groupers in all of Florida to break this number. We started the day off fishing for bonito (false albacore).

I used a live bonito for bait and then all of sudden there he was, the largest Goliath Grouper that I’ve ever seen! He ate the bait and immediately started towing the boat! We estimated the weight of this Goliath grouper between 600-700lbs.”