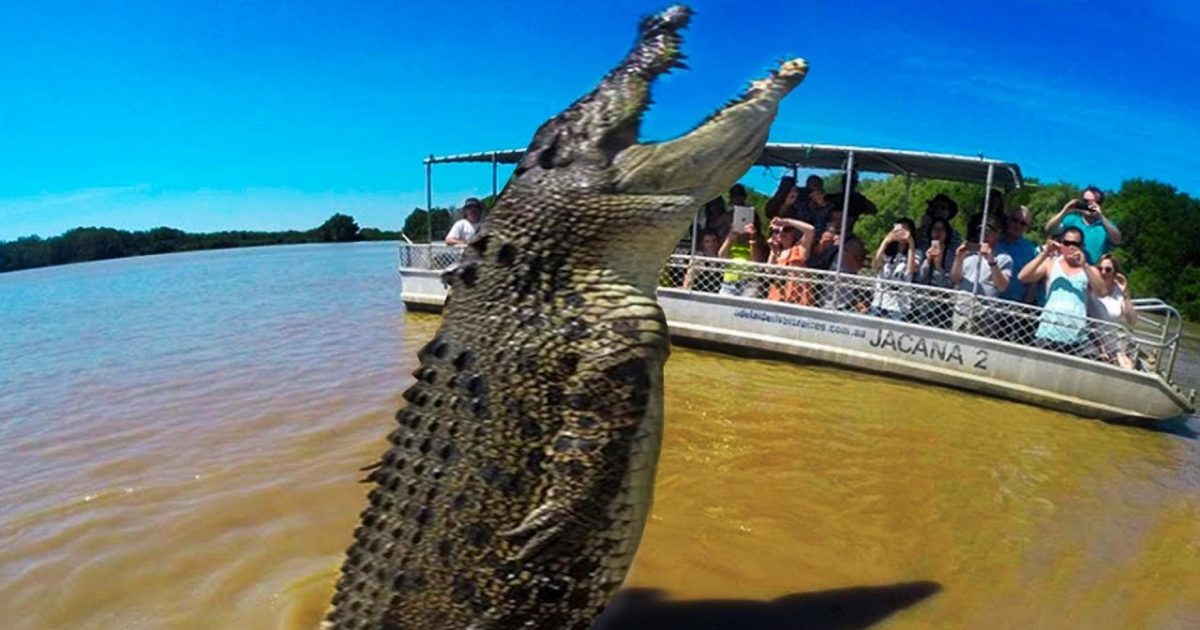 Facebook Twitter
One could say, that crocodiles (all species of Crocodylinae) are the closest thing to actual living dinosaurs currently walking the earth. Crocodiles are large reptiles that live in the water in warm climates all over the world. They like warm weather so much, they are actually quite sensitive to cold. They are unrelated to alligators and the gharial, and each reptile is part of its own biological family.
Crocodiles are carnivores (meat eaters) and eat fish, birds, mammals and other reptiles. Some even eat things like mollusks. Their sight, hearing and smell is very good, which makes them great hunters both in the water and on land.
Of course, crocodiles are known for their large, powerful jaws. The upper and lower jaws of a crocodile are actually the same width, and the teeth fit together much like gears in a machine. Because their teeth are so sharp, it’s probably good that crocodiles actually can’t stick out their tongues. In fact, they have very little movement with their tongues, as they’re attached by a thin membrane to their lower jaw.
Crocs are amazing, smooth swimmers. Their bodies are very streamlined, and they have webbed feet that allow them to either float quietly or swim swiftly and smoothly toward prey. In fact, with the help of their powerful tail, they can swim at speeds of up to 25 mph.
If you scroll down beneath the video, there is a list of all the crocodiles mentioned.
10. Gomek
Saltwater crocodiles are usually left alone because of their massive size. They are the largest reptile on the planet and are known for being extremely territorial and aggressive! This monstrous saltwater crocodile, known as Gomek, was captured in Papua New Guinea. In 1985, he was purchased by millionaire Arthur Jones.
9. Cassius
In 2011, Cassius was recognized by the Guinness Book of World Records as the world’s largest captive crocodile. The huge male saltwater croc was captured in 1987 in the Finis River of Australia’s Northern Territory after developing a reputation for attacking boats. He was caught by George Craig, the same man who captured Gomek in Papua New Guinea!
8. Lolong
Like a mentioned before, in 2012, a saltwater crocodile named Lolong stole the spotlight from Cassius as the world’s largest captive croc. Lolong was caught in September 2011 in the Philippines, after a three-week-long manhunt that had been sparked by suspicions that he had eaten a fisherman, a 12-year-old girl, and numerous water buffalo in the area.
7. Yai
Samut Prakan Crocodile Farm and Zoo, located near Bangkok, Thailand, claims to house the world’s biggest captive crocodile, named Yai, although the accuracy of that statement is up for debate. Yai hasn’t been officially recognized for this title since 1989. Hatched in 1972, Yai is a Southeast Asian Siamese and saltwater crocodile hybrid. Those two species don’t normally breed, making Yai especially unique.
6. Utan
Similarly to Yai, Utan is also an uncommon Siamese and saltwater crocodile hybrid. He also once resided at the Samut Prakan Crocodile Farm and Zoo in Thailand, and enjoyed a turn in the spotlight as the world’s largest captive crocodile. Utan, who was born in 1964 and named after the farm owner’s son, is 18 feet long and weighs just over 2,000 pounds!!
5. Brutus
Unlike most of the other crocodiles on this list, three-limbed Brutus lives in the wild. Brutus is known to hangout in the Adelaide River of Australia’s Northern Territory. According to rumors, his missing front leg is the result of a confrontation with a bull shark in the river’s estuary. There’s widespread evidence of Brutus’s status as a seasoned tough guy.
4. Bujang Senang
Although crocodile attacks are nothing new in Sarawak, East Malaysia, (not that I know personally) – one massive reptile stands out distinctly in the collective memory of locals. The crocodile, known as Bujang Senang, began his reign of terror in the 1940’s, and then kind of disappeared. He became the stuff of legend until 1982, when he attacked a man fishing for shrimp.
3. Gustave
Now, here’s one croc that you really don’t want to mess with. Gustave is rumored to have killed as many as 300 humans and has become the stuff of legend!! Located in Burundi, East Africa, the locals claim that this Nile crocodile snatches people by the river and dragging them into the water just to watch them drown and then leaves their bodies uneaten.
2. Dominator
Dominator can be most accurately thought of as Brutus’s rival and is frequently sighted by tourists during sightseeing boat rides. Located a short distance down the Adelaide River from Brutus, he fell under scrutiny in recent years as the number one suspect of a deep flesh wound sustained by his slightly smaller arch-rival. It is Brutus vs. Dominator!
1. Sarcosuchus Imperator
While you might be impressed by some of these modern-day reptilian giants, their predecessors were much bigger. Despite controversial evidence, some scientists believe that the biggest crocodile to ever live was the sarcosuchus imperator, also known as the SuperCroc, which grew to a maximum length of between 36 and 40 feet (11m-12m).
Facebook Twitter