Facebook Twitter
It’s difficult to imagine that an animal that was as big as megalodon was supposed to be, could have any enemies capable of taking it out. The megalodon is considered to be the largest shark that ever inhabited the earth. But among the hundreds of prehistoric predators that existed, would there be any predators that could have made short work of it, let alone being capable of confronting it? 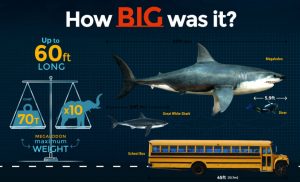 The modern ocean is a scary place, filled with barracuda, sharks, super-squids, and possibly Cthulhu. However, no matter what we find in the depths these days, none of them seem to come close to the giant terrors that roamed the seas in Earth’s past; giant sea-lizards, monster sharks and even “hypercarnivorous” whales. For most of these things, humans would barely qualify as a snack.
It is very likely that megalodon was the apex predator in its ecological niche. Apex predators don’t have other natural predators. Of course, we don’t have a complete fossil record, and it is possible that megalodon had predators. In a hypothetical scenario, where the most ruthless marine beasts would have coincided in the same era of the megalodon, who of all these, would be more adapted to devour this monstrous shark? Watch the video and it will answer those questions.
Facebook Twitter