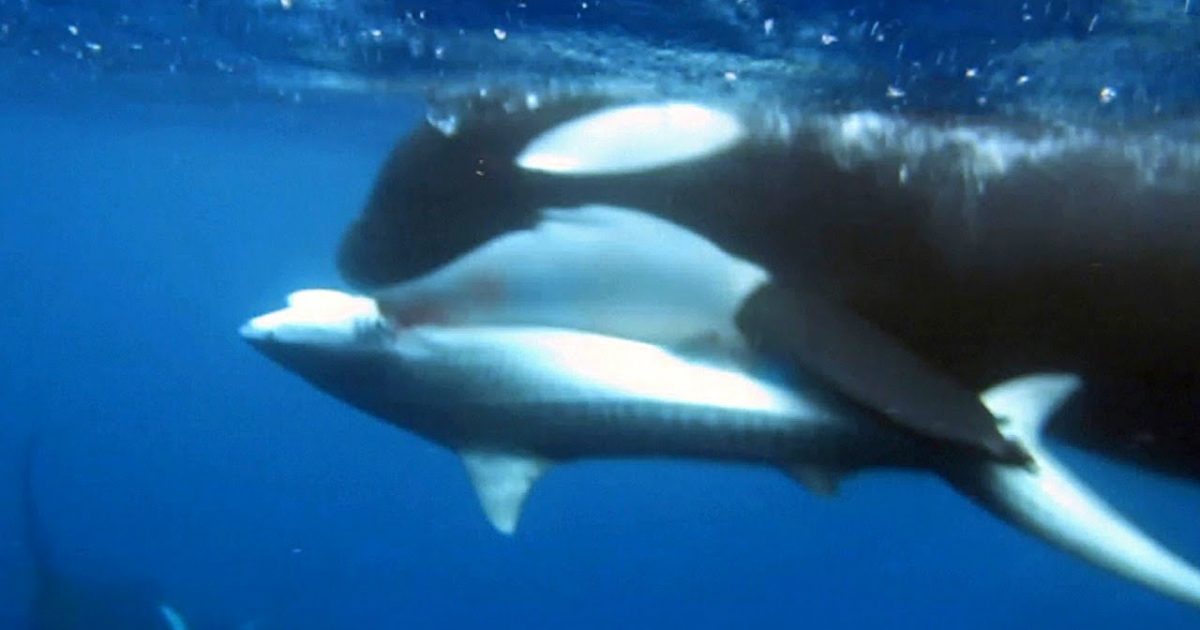 Facebook Twitter
A POD of killer whales have been filmed for the first time hunting and killing a TIGER SHARK. The footage, which is believed to be a world-first, was captured off the coast of Costa Rica by underwater photographer Caroline Power and British marine biologist Nicholas Bach.
It shows three killer whales working as a team to force the panicked shark to the surface, wearing it down and taking opportunistic bites at its fins. Eventually, a large bull moves in to deliver the death blow while flipping the shark onto its back in the process – which induces a state of paralysis known as tonic immobility.
The pod then takes turns at eating and stripping the seven-foot shark down to its bare bones before disappearing back into the ocean. The attack took place at Chatham Bay on Cocos Island, Costa Rica, on September 8, 2014.
About the Tiger Shark according to National Geographic:
Tiger sharks are named for the dark, vertical stripes found mainly on juveniles. As these sharks mature, the lines begin to fade and almost disappear.
These large, blunt-nosed predators have a duly earned reputation as man-eaters. They are second only to great whites in attacking people. But because they have a near completely undiscerning palate, they are not likely to swim away after biting a human, as great whites frequently do.
They are consummate scavengers, with excellent senses of sight and smell and a nearly limitless menu of diet items. They have sharp, highly serrated teeth and powerful jaws that allow them to crack the shells of sea turtles and clams. The stomach contents of captured tiger sharks have included stingrays, sea snakes, seals, birds, squids, and even license plates and old tires.
Facebook Twitter