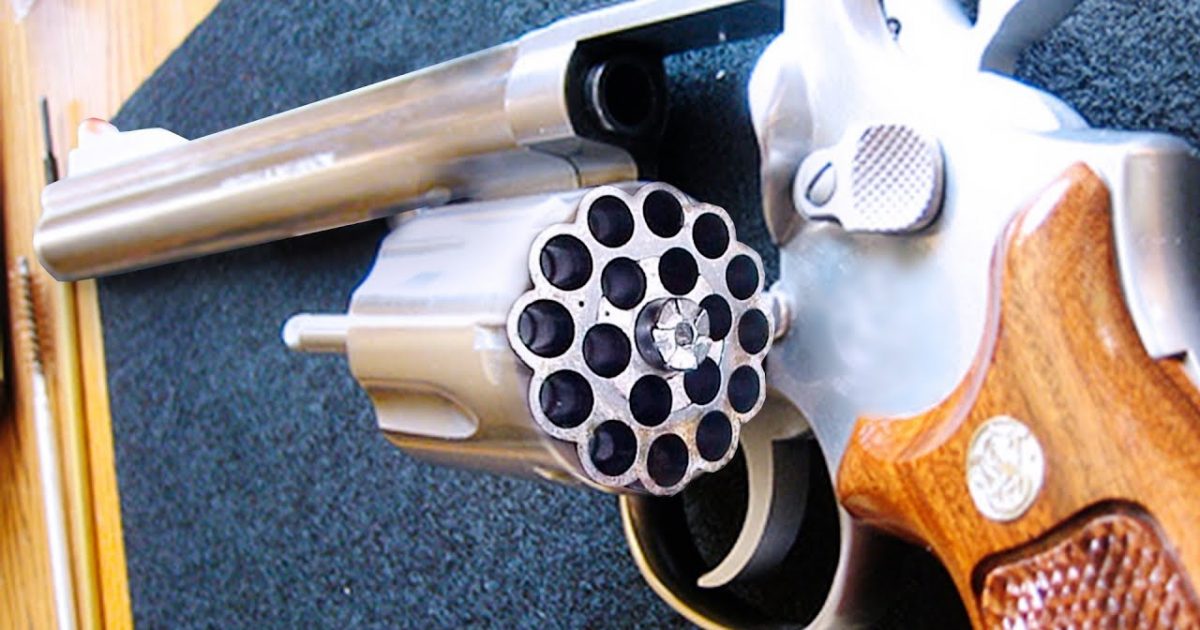 You’re going to hear the name ” Smith & Wesson” a lot on this list, and for good reason. This company makes a lot of powerful weapons, especially when it comes to pistols! So it’s only fair that we start off with one of the biggest and baddest weapons they ever made, the Smith & Wesson .500.

8. Uzi Submachine Gun
The Uzi is an Israeli super machine gun. While it is not exactly a pistol per se, it IS considered a handgun, because like a pistol, it can be “wielded with one hand”. When Israel was first created, right away it was under attack by its Arab neighbors. If it wanted to survive, they needed to defend themselves by any means possible.
7. Colt 1911
Time and technology have made it so guns advance at an incredibly high rate, and every year, bigger and better models are being tested and produced. To have staying power, you must be the best of the best, and that’s exactly what the Colt 1911 has been over a century. If you can’t tell by the name, the gun was developed and released in 1911, which means the gun has been in use for 107 years!
6. 1847 Colt Walker
Necessity is indeed the mother of invention and the same applies to guns. If you think about it, many guns had to be designed for specific purposes as warfare evolved. In 1847, two legends of war came together to make a gun that some claim was the most powerful gun the military ever used…enter the 1847 Colt Walker.
5. Smith & Wesson XVR 460 Magnum
Remember number 9? Well, this is like its big brother, and it shows in many ways.
To be fair, there are a lot of similarities between this gun and the .500, but there are a couple of major differences. One, the Smith & Wesson XVR 460 Magnum has the distinction of having the highest velocity ever in a big-bore handgun. This thing fires a bullet at a whopping 2,300 feet per second. That’s insane.
4. Thompson/Center Contender G2
You might think that putting a scope on a handgun is a relatively new idea, but that’s not the case. For example the Thompson/Center Contender G2, was made and released in 1967 along with a scope.
Unlike some of the Smith & Wesson guns, the Contender G2 was built not just for excellence, but for elegance. It’s smooth, got great lines, and it just feels like something you can control perfectly.
3. Colt Peacemaker
If you want to talk about classic guns, there are a few that stand out in the history books, and one of them just so happens to be the Colt Peacemaker. Dubbed, “The Gun That Won The West”, the Peacemaker was a gun that started out as a military weapon, then made its way to cowboys, then civilians, then back to the military. This weapon is so legendary that it’s been featured in numerous films, TV shows, video games, and is actually still made today.
2. Smith & Wesson Model 29 Classic
Dirty Harry and the classic line “Do you feel lucky punk?” is what cemented the Smith & Wesson Model 29 Classic as one of the most legendary weapons in the history of weapons. Used in the original Dirty Harry movie as well as Magnum Force, the gun is very powerful, and for a long time you wouldn’t have been wrong with saying that the .44 magnum was the most powerful handgun in the world.
1. Desert Eagle .50 Caliber
You’ve seen the Desert Eagle in Predator, Snatch and other movies. Like certain other guns on this list, the Desert Eagle wields the mighty .50 caliber round, and is about as powerful as semi-automatic handguns can get!
Facebook Twitter