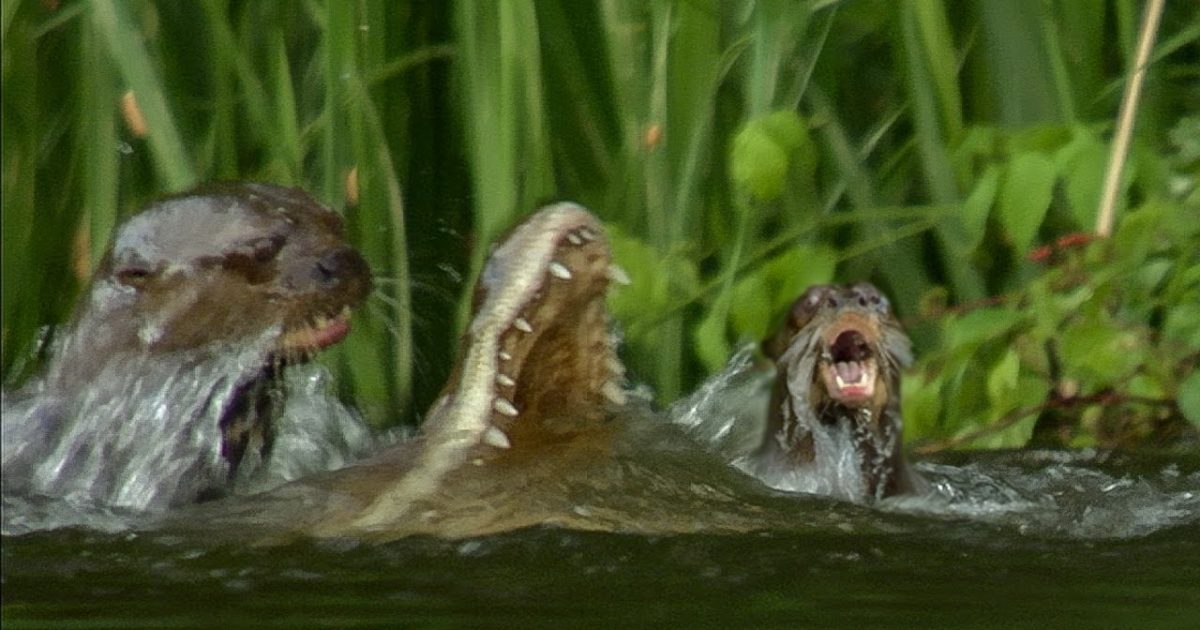 Facebook Twitter
This is a fight that you will probably never see again (unless it’s on video), a well coordinated attack on a caiman by an entire otter clan. The South American otter is the world’s largest, some grow up to 6 feet long. It lives only in the rivers and creeks of the Amazon, Orinoco, and La Plata river systems.
These huge members of the weasel family swim by propelling themselves with their powerful tails and flexing their long bodies. They also have webbed feet, water-repellent fur to keep them dry and warm, and nostrils and ears that close in the water.
Giant otters live in family groups which include monogamous parents and the offspring from several breeding seasons. They den by burrowing into banks or under fallen logs, and establish a home territory that they will aggressively defend.
Like most other otter species, giant otters come ashore to give birth. Females retreat to their underground dens and deliver litters of one to six young. Young otters remain in the den for a month but grow up quickly. After nine or ten months, it is difficult to tell mother from child.
Here is a description that went along with the video:
When a caiman attacks the otter cubs, the whole family comes together to defend them.Giant otters are one of the toughest creatures in the Amazon jungle. Not only are they living in a lake in the middle of the Peruvian Amazon, but they are also surrounded by three hundred black caiman, anaconda, jaguar and puma.
Diablo the giant otter also has six unruly pups to keep from harm, and educate in the ways of the jungle. This otter dad certainly has his paws full. Leading wildlife cameraman Charlie Hamilton-James follows the family in their remarkable location over the course of a whole season, through their ups, downs, and the start of a new generation of otters.
Facebook Twitter