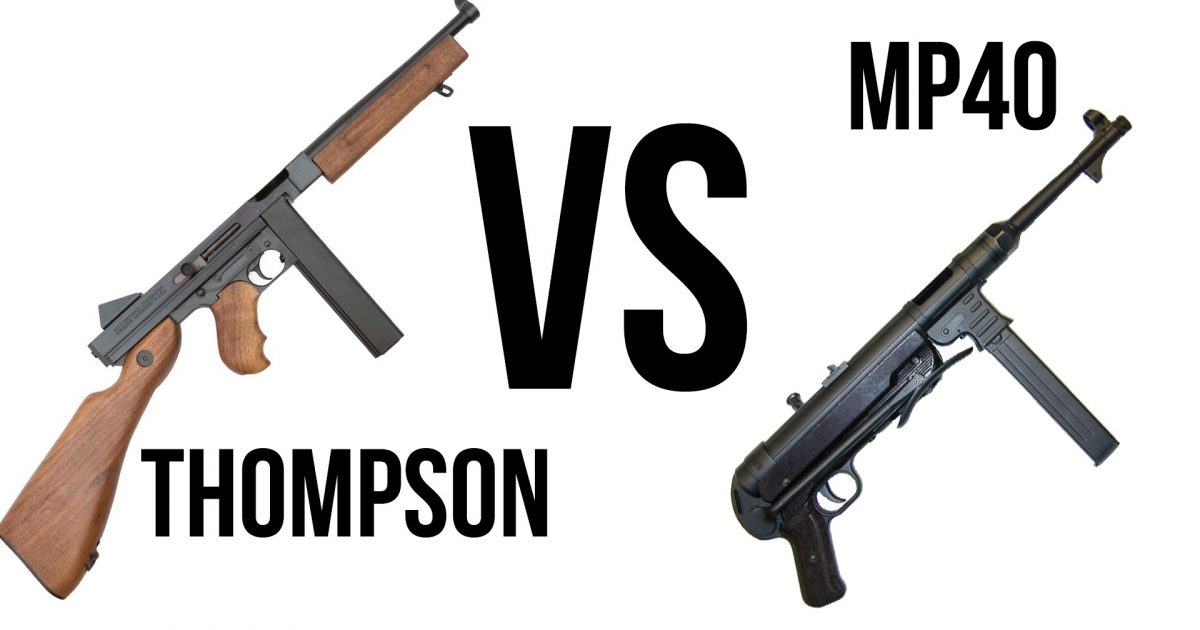 Facebook Twitter
If there were two iconic weapons of World War II, they would be the Thompson M1A1 submachine gun of the United States and the other would be the MP40 of Nazi Germany. Both weapons had a high rate of fire, the Thompson using the .45 ACP and the MP 40 firing the 9mm. The Thompson was commonly called the “Tommy-Gun” and strangely enough, the MP40 was misidentified and was called the “Schmeisser” by allied troops.
About the Thompson:
The Thompson submachine gun is an American submachine gun, invented by John T. Thompson in 1918, that became infamous during the Prohibition era, becoming a signature weapon of various police syndicates in the United States. It was a common sight in the media of the time, being used by both law enforcement officers and criminals. The Thompson submachine gun was also known informally as the “Tommy Gun”, “Annihilator”, “Chicago Typewriter”, “Chicago Piano”, “Chicago Style”, “Chicago Organ Grinder”, “Trench Broom”, “Trench Sweeper”, “The Chopper”, and simply “The Thompson”.
The Thompson was favored by soldiers, criminals, police, and civilians alike for its large .45 ACP cartridge, accuracy, and high volume of fully automatic fire. It has since gained popularity among civilian collectors for its historical significance. It has had, and continues to have, considerable significance in popular culture, especially in works about the U.S.’s Prohibition era and World War II, and hence is among the best-known firearms in history. Although the original fully automatic Thompsons are no longer produced, numerous semi-automatic civilian versions are still being manufactured by Auto-Ordnance. These retain a similar appearance to the original models, but they have various modifications in order to comply with US firearm laws.
About the MP 40:
The MP 40 (Maschinenpistole 40) was a submachine gun chambered for the 9×19mm Parabellum cartridge. It was developed in Nazi Germany and used extensively by the Axis powers during the Second World War.
Designed in 1938 by Heinrich Vollmer with inspiration from its predecessor the MP 38, it was heavily used by infantrymen (particularly platoon and squad leaders), and by paratroopers, on the Eastern and Western Fronts. Its advanced and modern features made it a favorite among soldiers and popular in countries from various parts of the world after the war. It was often erroneously called “Schmeisser” by the Allies, although Hugo Schmeisser was not involved in the design or production of the weapon. From 1940 to 1945, an estimated 1.1 million were produced by Erma Werke.
Facebook Twitter