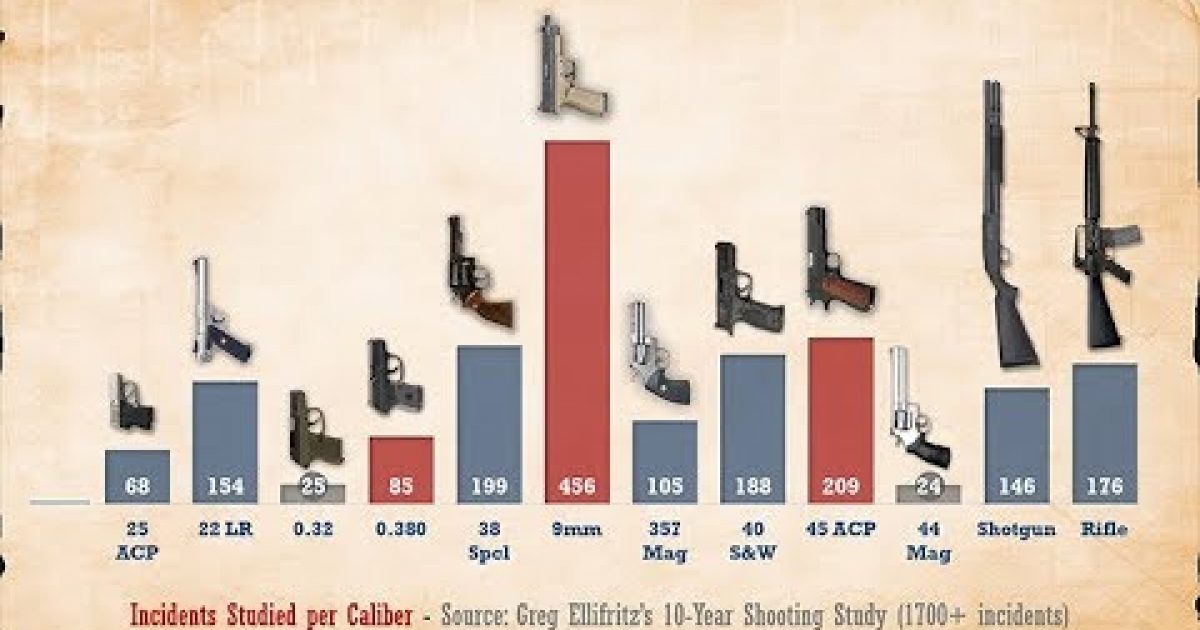 This video uses the data from Greg Ellifritz’s 10-year stopping power study of real-world gun fights to shed the light of actual data on several common beliefs about handgun calibers. I would say that the video below is one of the best sources of information about this particular subject and will answer quite a few questions for a lot of people.

Greg has been a police officer since 1995 and spent 13 years as the full time tactical training officer for his central Ohio agency. In that position, he was responsible for developing and instructing all of the in-service training for a 54-officer police department. In addition to his training position, he has served as patrol officer, armorer, bike patrol officer, bike patrol coordinator, sniper, and field training officer for his agency.
He has instructed for the Tactical Defense Institute since 2001 and been a lead instructor for TDI’s ground fighting, knife fighting, active shooter, impact weapons, and extreme close quarters shooting classes.
Greg holds instructor, master instructor, or armorer certifications in more than 75 different weapons systems, defensive tactics programs, and law enforcement specialty areas. In addition to these instructor certifications, Greg has successfully completed more than 4,000 hours of documented formal training with the leading firearms, empty hand fighting, and edged weapons instructors in the country.
Greg has been an adjunct instructor for the Ohio Peace Officer’s Training Academy, teaching firearms, defensive tactics, bike patrol, knife defense and physical fitness topics. He has taught firearms and self defense classes at the national and international level through the International Association of Law Enforcement Firearms Instructors, The American Society of Law Enforcement Trainers, Rangemaster Tactical Conference, and Ohio Association of Chiefs of Police.
He has a Master’s degree in Public Policy and Management and has written for several publications and websites including: ‘The Firearms Instructor,” “Ohio Police Chief,” “Combat Handguns,” Survivalblog.com, “Concealed Carry Magazine,” Primedia’s “Personal & Home Defense Annual,” “Recoil Magazine,” and “American Handgunner.”
Facebook Twitter