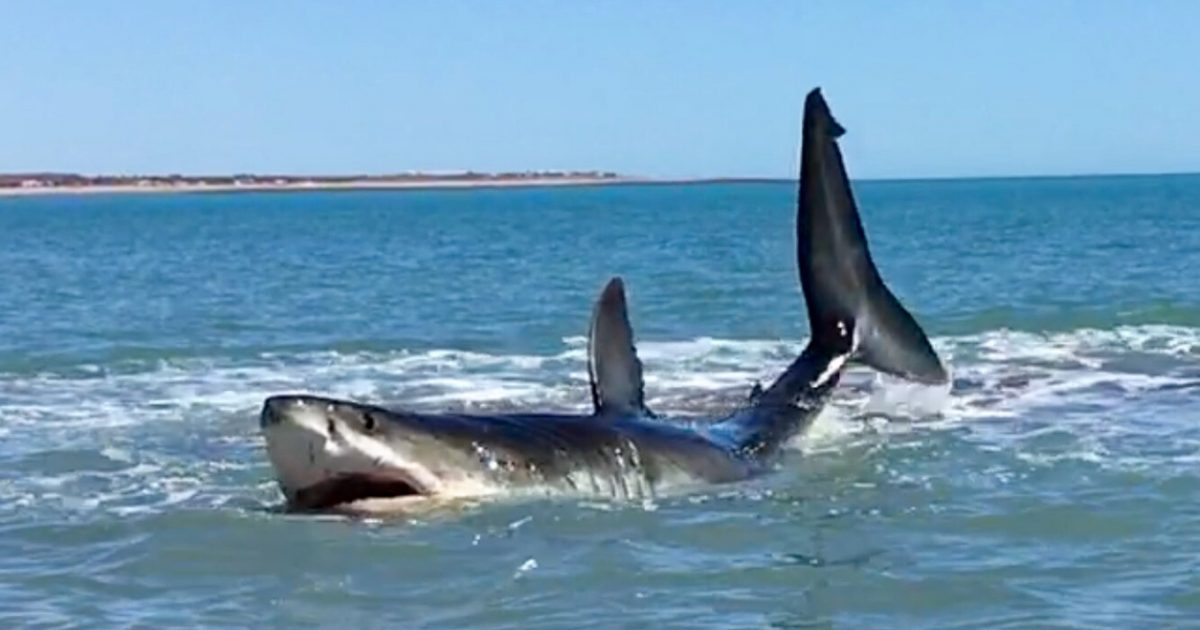 Facebook Twitter
In a video that is taking the internet by storm, a great white shark is caught thrashing in what looks like 3 to 5 feet of shallow water. It’s not often that we see such up-close-and-personal video of a great white shark in action, and when we do, it’s generally hundreds of feet under the water via a brave soul holding a camera in a shark cage.

In this breathtaking footage captured in May, of 2017, a man and diver named Dale Pearson captures a great white shark thrashing and splashing in just 3 feet of water. He quickly determines that it’s neither a pilot whale or hammerhead as he and his friend initially suspected.

As you can see in the video below, the great white appears to be badly wounded. The 14-foot shark likely was injured by the blades of a boat propeller.

This video was taken in a remote area of the Gulf of California, sometimes called the Sea of Cortez, near the Baja California Peninsula. Here’s an approximate location from Google Maps:

As Pearson explains, “There is no phone service of any kind [there]. You can not call anyone for help.” In other words, they couldn’t call any marine wildlife experts to help tend to the shark’s wounds. But, don’t worry. Pearson says that the shark moved continuously, and despite probably being in pain, “It had total control over where it was and how deep of water it was in.”

Pearson thinks the shark was ultimately not stranded in the shallows at all but that it was feeding on the stingrays that ended up stinging Pearson’s group.

As for the great white in this video, the story does have a happy ending. Pearson says, “After 30 minutes in the shallow water the shark swam away under its own power and was seen for the next two days.” Back for more stingray supper, it is presumed.

Check out the video below (but be warned, Pearson is totally taken aback by his shark encounter, so he uses some pretty choice language! If you don’t like swear words, you can simply mute your device and still enjoy this awesome footage).