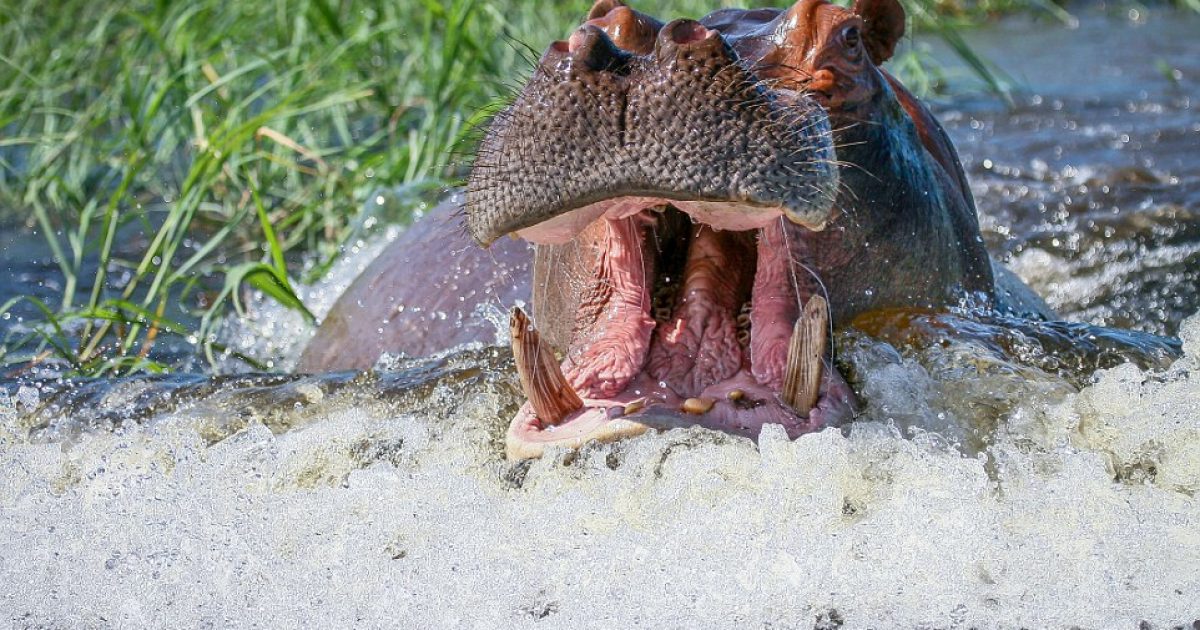 At 11 feet in length and an average weight of 6000 pounds, with 1.8ft incisors, what sane person wouldn’t almost crap his pants when they see a beast of that size charging straight towards you at almost 20 miles per hour?  I’m not a big game hunter, for one, I’ve never been to Africa and also, I couldn’t personally (in MY mind anyway)  justify killing an elephant, or a hippopotamus, unless of course my life was in danger…..but that’s just me.

Even though I have hunted game animals here in the state of Washington, in a way, I’m almost envious of those who do hunt big game animals in Africa. As long as the proper permits from the government are in order and the meat isn’t wasted, then more power to them.

But after watching the video below, I will say, that these guys have stones the size of bowling balls to calmly stand there and fire on an animal like that charging at them.

” To many, the hippo is a comical creature. In the Walt Disney cartoon Fantasia, a troupe of hippo ballerinas in tiny tutus performs gravity-defying classical dance with lecherous male alligators. But many Africans regard hippos as the continent’s most dangerous animal. Although accurate numbers are hard to come by, lore has it that hippos kill more people each year than lions, elephants, leopards, buffaloes and rhinos combined.

Hippo pods are led by dominant males, which can weigh 6,000 pounds or more. Females and most other males weigh between 3,500 and 4,500 pounds, and all live about 40 years. Bachelor males graze alone, not strong enough to defend a harem, which can include as many as 20 females. A hippopotamus (the Greek word means “river horse”) spends most of the day in the water dozing. At night hippos emerge and eat from 50 to 100 pounds of vegetation. Hippos can be testy and brutal when it comes to defending their territory and their young. Though they occasionally spar with crocodiles, a growing number of skirmishes are with humans. Hippos have trampled or gored people who strayed too near, dragged them into lakes, tipped over their boats, and bitten off their heads.”

If you want to know more about Mark Sullivan, click HERE

Since your are most likely seeing this from the safety of your I-Phone, or desktop computer at home, it’s safe to say you are not in any danger, so enjoy.