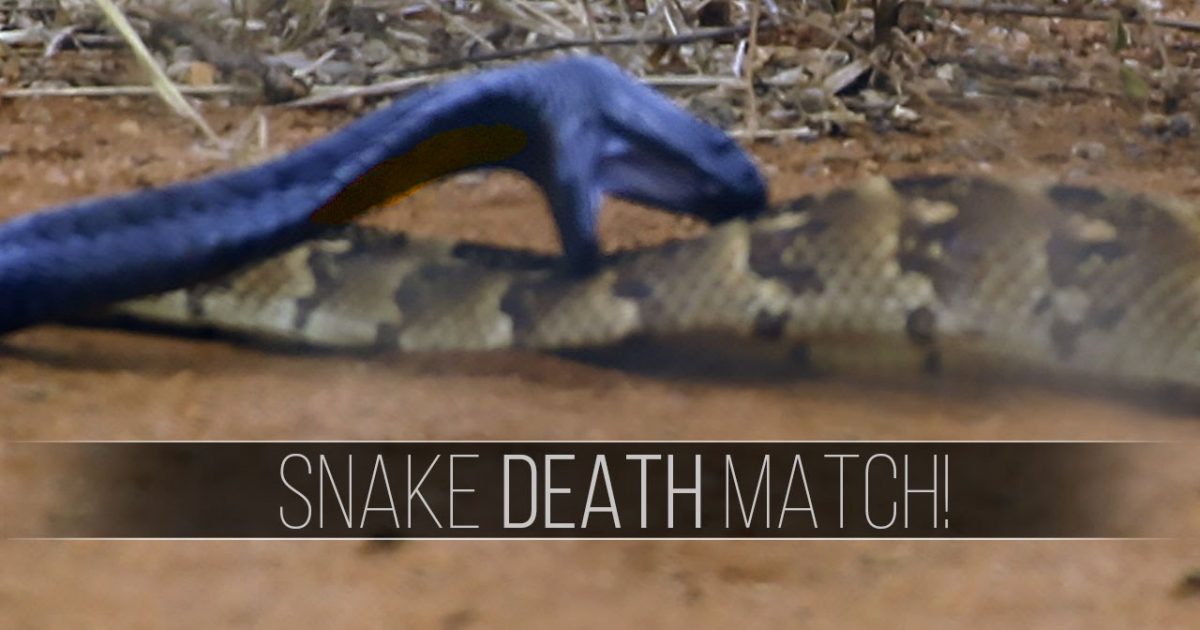 Simply put, we have two very dangerous and venomous snakes here, but the real question is- Which one will be the victor of this life and death conflict and who will become the meal? Since snakes are carnivores, that means they will eat only meat including each other. Some snakes are hunters while others will lie in waiting to ambush their prey… all snakes swallow their food whole.

Here is some information regarding our two antagonists, first the Black Cobra

*”The forest cobra (Naja melanoleuca), also commonly called the black cobra and the black and white-lipped cobra, is a species of venomous snake in the family Elapidae. The species is native to Africa, mostly the central and western parts of the continent. It is the largest true cobra species with a total length (including tail) of up to 3.1 meters (10 feet). Although it prefers lowland forest and moist savanna habitats, this cobra is highly adaptable and can be found in drier climates within its geographical range. It is a very capable swimmer and is often considered to be semi-aquatic. The forest cobra is a generalist in its feeding habits, having a highly varied diet: anything from large insects to small mammals and other reptiles. This species is alert, nervous and is considered to be a very dangerous snake.

*”The puff adder (Bitis arietans) is a venomous viper species found in savannah and grasslands from Morocco and western Arabia throughout Africa except for the Sahara and rain forest regions.It is responsible for causing the most snakebite fatalities in Africa owing to various factors, such as its wide distribution, frequent occurrence in highly populated regions, and aggressive disposition.”