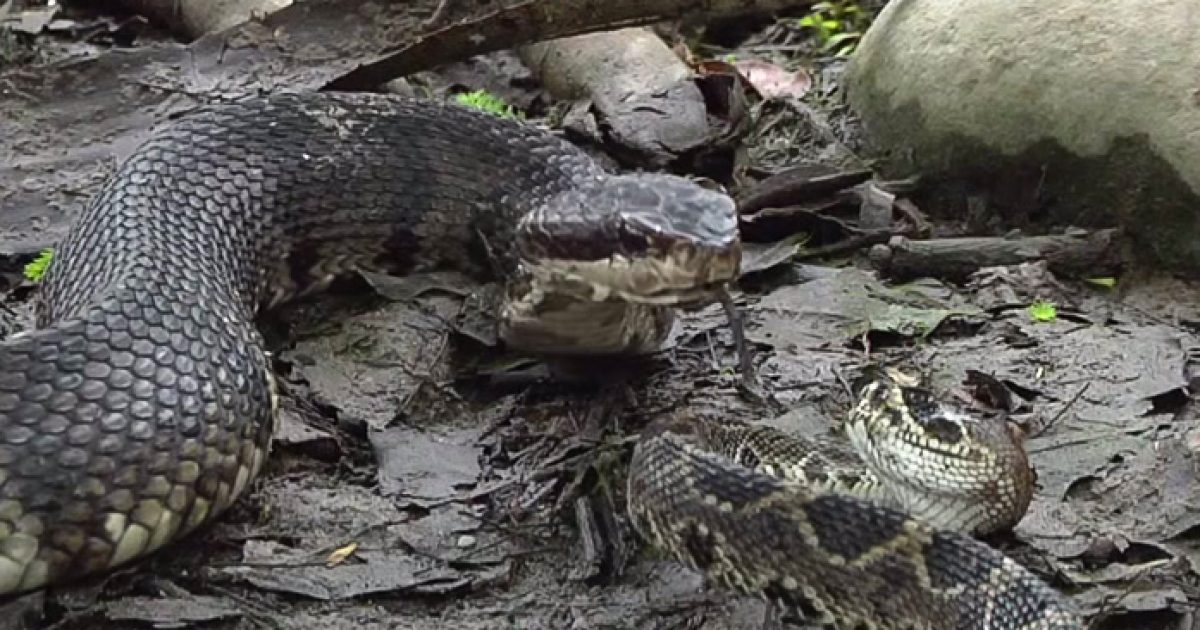 In a fight between a cottonmouth and a Rattlesnake, there almost seems to be something primordial about it. When it’s two reptiles fighting, we tend to detach our feelings, because these animals are coldblooded. Because when we think of the struggle to survive regarding the animal kingdom, we usually picture mammals fighting to stay alive , like prey animals trying desperately to NOT get eaten by predators.

When we see documentaries on Animal Planet, or National Geographic channels, our heart strings always get pulled and we tend to root for some poor gazelle trying to out-run a lion, or a pack of hyenas. But when it comes to reptiles…we could care less. Reptiles naturally make our skin crawl, so we tend not to care who wins and who loses. In this instance it’s almost as if you think that the rattler just wants to get past the other snake, but because the Cottonmouth is an opportunistic feeder, that doesn’t happen.

The cottonmouth, also know as water moccasin, is an opportunistic feeder. Its diet includes mammals, birds, amphibians, fish, snakes, small turtles and small alligators. These snake do not hesitate to prey on venomous like rattlesnakes or copperheads. Cannibalism is a frequent occurrence between this species as well as the feeding on carrion. But in general its diet consists of fish and frogs. Fish are captured by cornering them in shallow water, usually against the bank or under logs.

They take advantage when bodies of water begin to dry up in the summer or early fall and gorge themselves on the resulting high concentrations of fish and tadpoles.
Frogs and small birds are seized and held until movement stopped. Larger prey will be approached in a more cautious manner; a rapid strike will be executed after which the snake withdraws. Young individuals have yellowish or greenish tail tips and engage in caudal luring. The tail tip is wriggled to lure prey, such as frogs and lizards, within striking distance. These video was filmed by Heiko Kiera aka Ojatro in Florida 2012.