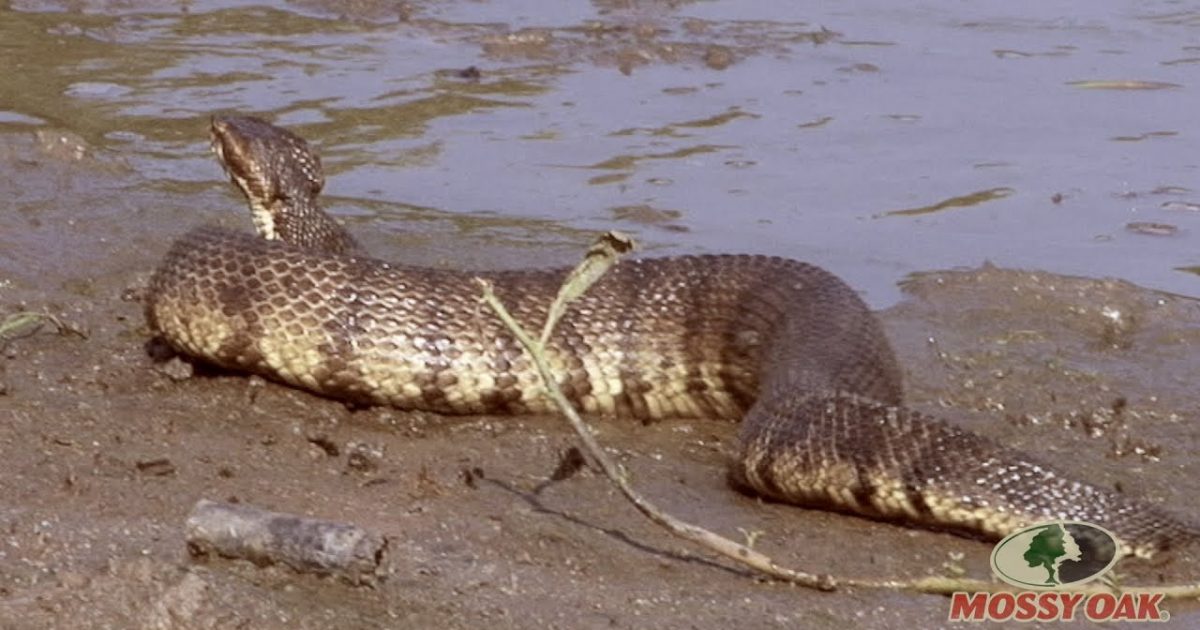 Seeing a Cottonmouth this size, would make even the most experienced outdoors-man give it a wide berth. Whether you are a fan of snakes, or not, this certainly is one video you should watch. When I was in the U.S. Army and stationed in the southeastern part of the country (Texas, Georgia, Alabama and North Carolina),  I came across quite a few venomous snakes in my time.

Rattlesnakes, Coral snakes and even Water Moccasin’s (aka Cottonmouth). At least the rattlesnake will give you a quick shake of the rattles in his tail as a warning if you get too close, but the other two snakes won’t. The Coral snake has it’s brights color pattern to give a visual warning to any would-be predators who might want to bother it. So that leaves us with the cottonmouth. This snake when come upon in the wild, some say, will not retreat when confronted, others say, that they’re really aggressive, but not as a rule. When they feel threatened they will often open their mouths and display their fangs as a warning. Often found on, or near water, the cottonmouth is a semi-aquatic viper and is a strong swimmer. As a rule, these animals won’t bother you, unless you bother them.

“Agkistrodon piscivorus is a venomous snake, a species of pit viper, found in the southeastern United States. Adults are large and capable of delivering a painful and potentially fatal bite. When antagonized, they will stand their ground by coiling their bodies and displaying their fangs. Although their aggression has been exaggerated, individuals may bite when feeling threatened or being handled.  This is the world’s only semiaquatic viper, usually found in or near water, particularly in slow-moving and shallow lakes, streams, and marshes. The snake is a strong swimmer and will even enter the sea. It has successfully colonized islands off both the Atlantic and Gulf coasts.
The generic name is derived from the Greek words ancistro (hooked) and odon (tooth), and the specific name comes from the Latin piscis (fish) and voro (to eat); thus, the scientific name translates into “hooked-tooth fish-eater”. Common names include variants on water moccasin, swamp moccasin, black moccasin, cottonmouth, gapper, or simply viper.”
Parler Facebook Twitter