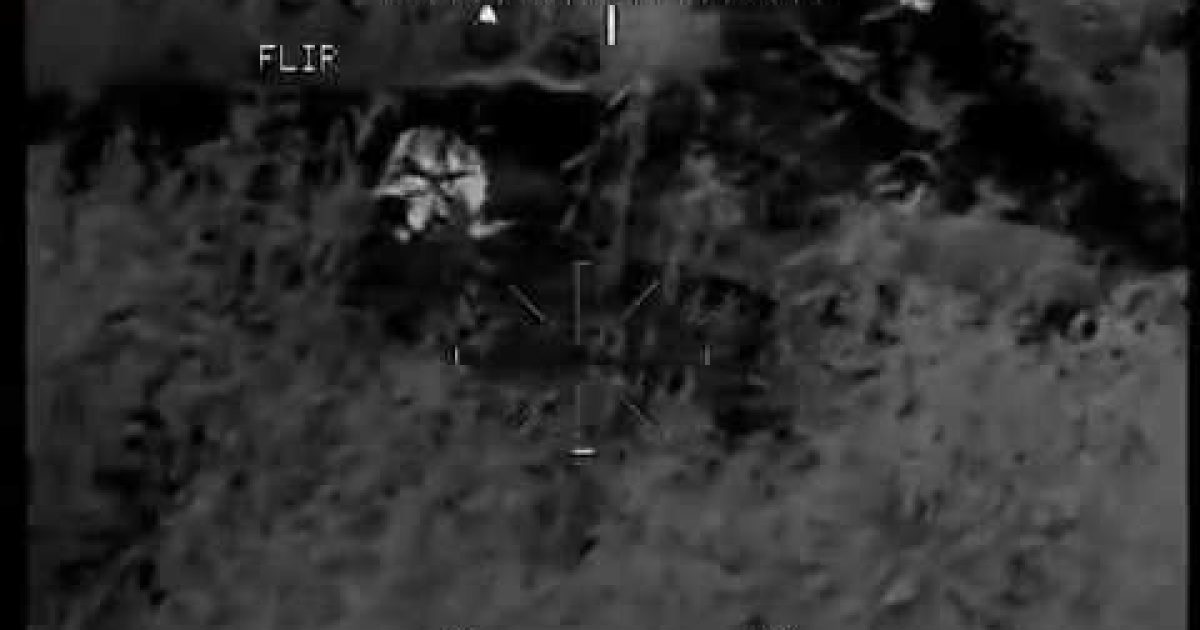 It just puts a great big smile on my face every time I see a rat-bastard terrorist get sent straight to hell by our troops. These Taliban terrorists haven’t seemed to learn that they are fighting against the single most well-equipped fighting force the world has ever seen. That’s their Achilles heel, technology, oh sure, they have cell phones and modern firearms, and since they don’t wear uniforms, it’s hard to tell the good guys from the bad guys.

But it’s night vision and thermal imaging technology that always seems to get them in the end. They think just because it’s dark, that if they hide under a bush that our guys can’t see them, well the goat-humpers in the video below, learned the hard-way, that when it comes to try hiding from an Apache attack helicopter, there’s no place safe enough, even in the dark.

*Apache Avionics and Targeting:
One of the revolutionary features of the Apache was its helmet mounted display, the Integrated Helmet and Display Sighting System (IHADSS);[51][52] among its capabilities, either the pilot or gunner can slave the helicopter’s 30 mm automatic M230 Chain Gun to their helmet, making the gun track head movements to point where they look. The M230E1 can be alternatively fixed to a locked forward firing position, or controlled via the Target Acquisition and Designation System (TADS).On more modern AH-64s, the TADS/PNVS has been replaced by Lockheed Martin’s Arrowhead (MTADS) targeting system.
U.S. Army engagement training is performed under the Aerial Weapons Scoring System Integration with Longbow Apache Tactical Engagement Simulation System (AWSS-LBA TESS), using live 30 mm and rocket ammunition as well as simulated Hellfire missiles. The Smart Onboard Data Interface Module (SMODIM) transmits Apache data to an AWSS ground station for gunnery evaluation.The AH-64’s standard of performance for aerial gunnery is to achieve at least 1 hit for every 30 shots fired at a wheeled vehicle at a range of 800–1,200 m (870–1,310 yd)
.
The AH-64 was designed to perform in front-line environments, and to operate at night or day and during adverse weather conditions.Various sensors and onboard avionics allows the Apache to perform in these conditions; such systems include the Target Acquisition and Designation System, Pilot Night Vision System (TADS/PNVS), passive infrared countermeasures,GPS, and the IHADSS. Longbow-equipped Apaches can locate up to 256 targets simultaneously within 50 km (31 mi).In August 2012, 24 U.S. Army AH-64Ds were equipped with the Ground Fire Acquisition System (GFAS), which detects and targets ground-based weapons fire sources in all-light conditions and with a 120° Visual field. The GFAS consists of two sensor pods working with the AH-64’s other sensors, and a thermographic camera that precisely locates muzzle flashes.
In 2014, it was announced that new targeting and surveillance sensors were under development to provide high-resolution color imagery to crews, replacing older low definition black-and-white imaging systems. Lockheed received the first contract in January 2016, upgrading the Arrowhead turret to provide higher-resolution color imaging with longer ranges and a wider field of view. In 2014, the U.S. Army was adapting its Apaches for increased maritime performance as part of the Pentagon’s rebalance to the Pacific. Additional avionics and sensor improvements includes an extended-range radar capable of detecting small ships in littoral environments, software adaptions to handle maritime targets, and adding Link 16 data-links for better communications with friendly asset.