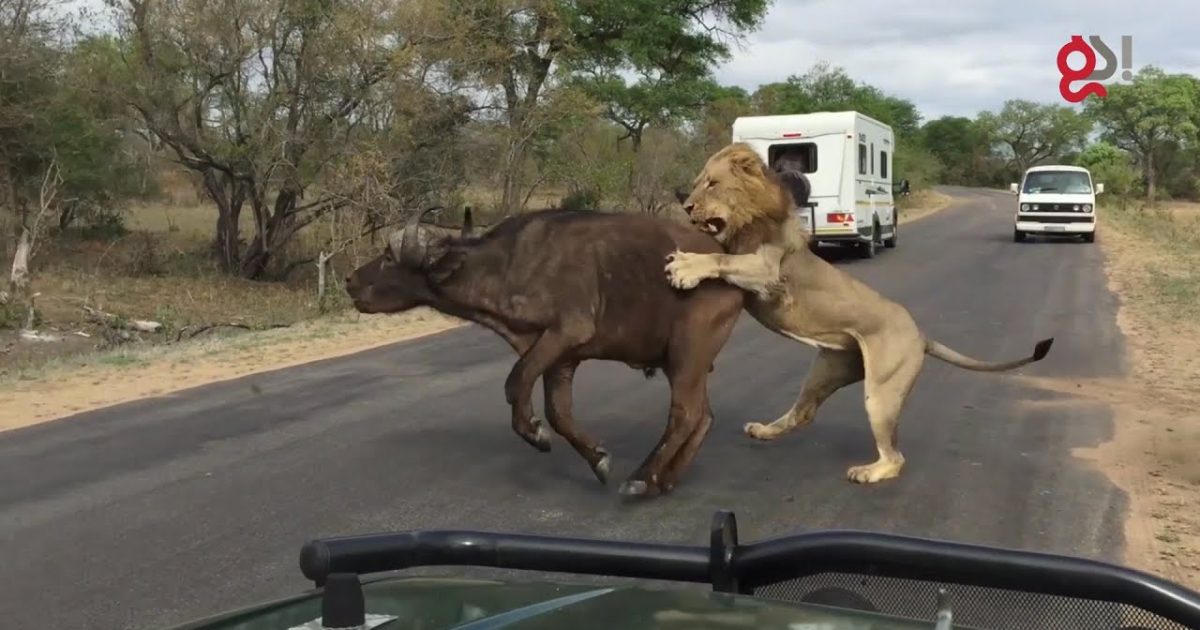 When it comes to being absolutely awesome predators, lions have to be one of nature’s all time best. Mother nature gave these creatures speed, size and power and as you’ll see in the video below, they aren’t afraid to use those gifts. Safari-goers in Kruger National Park are almost assured to se something like this on almost a daily basis if they’re lucky.

According to the description beneath the video:

A pride of four lions attack a buffalo mere meters from tourists near the Mantimahle Waterhole in the Kruger National Park in South Africa. This amazing footage was captured by field guide, Marten Lange. “I had two American guests for a morning drive and at the top of the lady’s wish list was to see lions”, says Lange. Lange, who had received word on a lion sighting, told the guest that she might be in for a surprise as they proceeded on their morning game drive.

“I found the four male lions lying under a Magic Guarri bush and the lady was ecstatic when one lifted his head to see what was going on”, he says. Being about 50 meters away, Lange waited with the guests to see if the lions would move closer toward the road for a better photographic opportunity.

“After about 20 minutes something caught my eye and I saw two stragglers from the southern side of the road following the rest of the herd of buffalo that had already crossed the road and headed north to drink. I later learn’t that the lions tried their luck with the herd but got chased off. I saw that the two buffalo were heading straight towards us and were going to cross the road right in front of us. There was a footpath leading down towards the water and the lions in the front of my vehicle. I suggested that my guests get their cameras ready because I could sense something might just happen”, continues Lange.

Lange noticed the one buffalo was carrying a bad limp causing it to fall behind it’s herd. “Suddenly one lion lifted it’s head and saw the buffalo. Then all hell broke loose and the lions started the chase, he says. Slipping on the tar road, the lions brought the buffalo down only meters in front of the ecstatic spectators.

“It was like watching an exciting wildlife documentary, but now we were part of the action. I have seen a couple of kills by leopard, lion, cheetah, wild dog, and hyena. But nothing previously seen could compare with this experience, because it was so in your face. My guests were absolutely blown away”, Lange says.