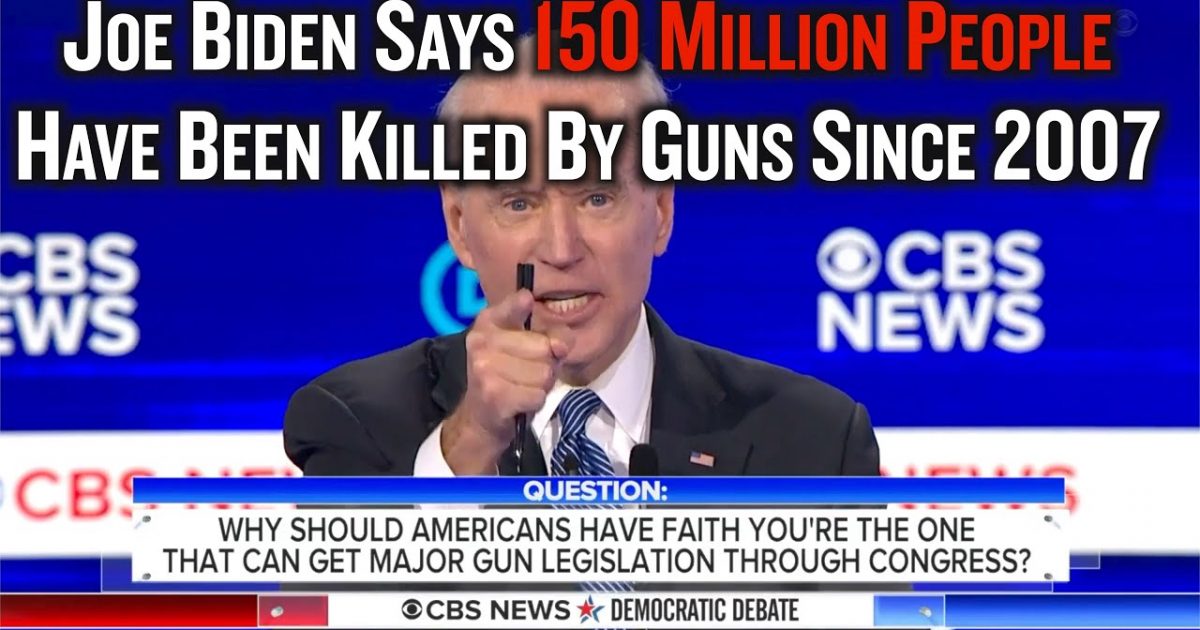 I do not have a clue where the hell they get these OUTRAGEOUS figures from, but, if you’re going to tell a lie…make sure it’s a BIG ONE right?  But just so that you don’t think I’m just picking on a senile old man, the main stream media is also responcible for such fradulent information regarding gun deaths also. I suppose I could tear-up what Biden said on the debate stage very easily…but why waste my breath.

Joe Biden claimed in last nights debate, that guns have killed 150 million people in the United States since 2007. That’s roughly half the U.S. population. Neither the moderators nor his competitors corrected his ludicrous error. Why? Well, because disinformation and factual errors are par for the course in the Democrats’ anti-gun narrative and quite frankly, I’m rather sick of their bullcrap when it comes to guns.

2007 was 13 years ago and there are 30-40k gun deaths a year in this country. If there were 40k gun deaths every year for 13 years straight that would be 520,000 people. So, can someone please explain to Creepy Uncle Joe, that 150 million people is nearly half the US population. 520,000 isn’t even in the same planetary system as 150 million, this is ludicrous.

One of the 2020 Democrat Presidential candidates goal, is to get rid of the 2nd Amendment and if the Democrats take the Presidency, the Senate AND the House,  don’t think they won’t do it. Michael Bloomberg has spent MILLIONS OF DOLLARS nation-wide to push his own anti-gun agenda & candidates in both city and state-wide elections.

And no, I’m not letting the old Communist Bernie Sanders off the hook either, remember, this is the same guy that said (on national television no less) that Cuban Dictator Fidel Castro “wasn’t all bad”.  After watching this clown show, I’d say, that if anyone of these Democrat morons got elected as president, the entire country would go straight to hell.