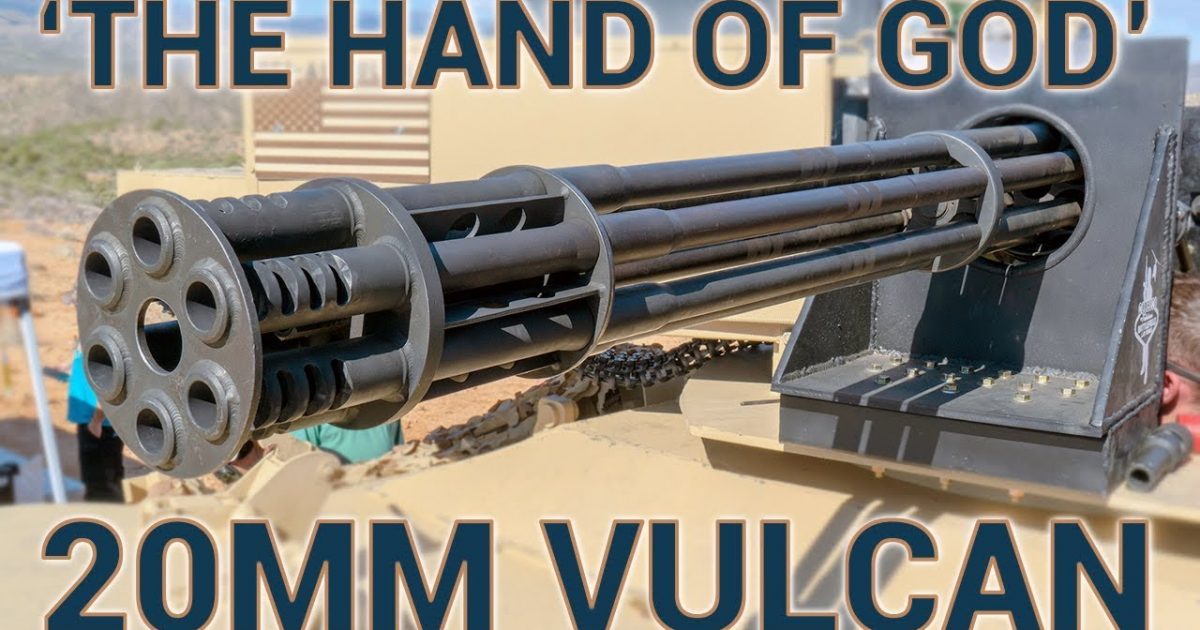 Wow…after seeing this gun in action, it’s no wonder they call it “The Hand Of God”, this is one badass gun!!  It’s like I’ve always said…’the BIGGER the toys…the bigger the noise’ and the M61 certainly fits that description. Sadly, when I was in the U.S. Army, the biggest weapon I ever fired was Ma Deuce and while that was an aswesome experience, I would give my left arm to fire-off a 1000 rounds with the M61 (I mean who wouldn’t right?).

Here’s what Gunscom had to say beneath the video:

Battlefield Vegas nicknamed their M61 20mm Vulcan Cannon “The Hand of God” because it can lay great vengeance and furious anger upon its target. They brought the M61 Vulcan mounted on a British FV432 APC to the Big Sandy Shoot in October 2018. It pretty much stole the show. Every time it fired, there was a huge crowd cheering it on.
It’s not every day you get to see an M61 Vulcan in action. They’re normally found on F-18 and F-16 fighter jets. That’s where Battlefield got theirs — an F-16. It was de-milled, but their talented gunsmith were able to put it back together and get it working again.
Vulcans fire the electrically primed 20mm round at a rate of 6,000 rounds per minute. Battlefield was able to slow down the rate of fire to about 3,500 RPM by replacing the hydraulic motor with an electric one. This is beneficial because ed them to reduce the rate of fire to around 3,500 RPM which is good in a way because at 6,000 RPM, if you blink your eye, you can miss the burst. A slower rate of fire actually allows the burst to be appreciated.
The 20mm projectiles fired at Big Sandy weighed 1,500 grains and left the muzzle at around 3,500 feet per second. According to Robert Bigando, the big gun expert who loaded all the rounds and tended to the gun, the 20mm round is extremely hot and produces very high pressures. “It’s a ripper downrange,” he said.
Facebook Twitter