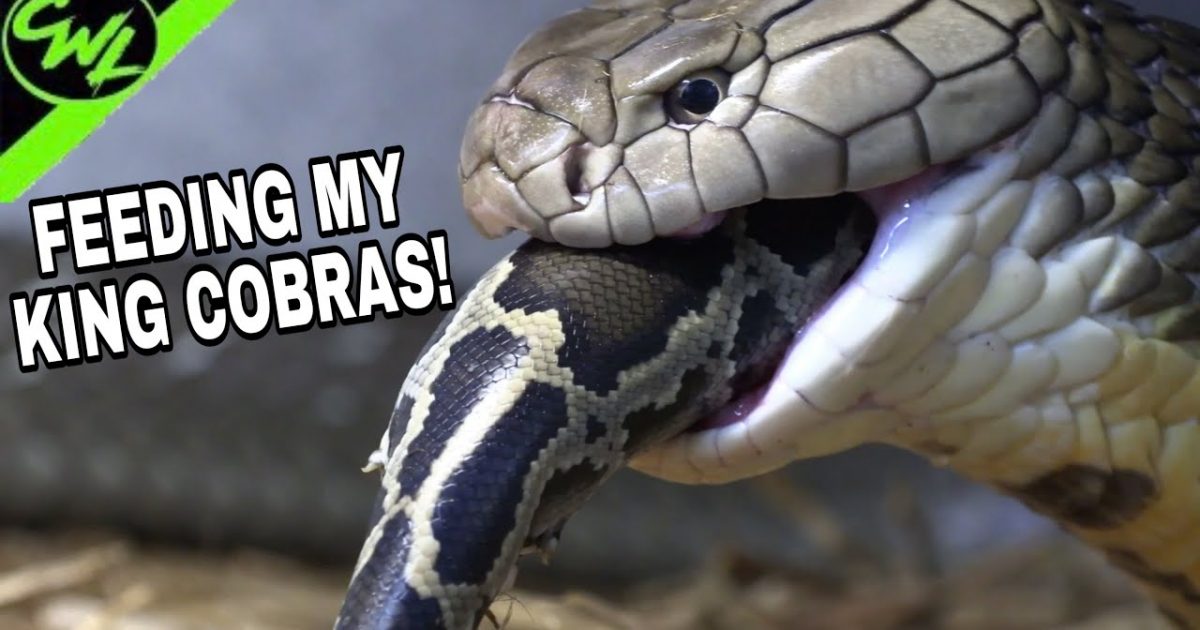 First off, I want to mention, that even though the guy in the video is a proffesional snake handler…I still think he’s nuts. There is NO WAY I would even think about being in the same room with a king cobra who is not safely locked away. It’s not that I am afraid of snakes, it’s just that I have a very healthy respect for the world’s longest venomous snake.

The video below is just slightly over 24 minutes long, but if you don’t want to watch the entire thing, then just skip to the 19:12 mark and you can watch the actual feeding. There is something almost primeval about watching a snake feed, it’s eyes are wide open and they look ‘soulless “, like there is nothing behind them but a remorseless hunger and to me, it looks like the very definition of Evil Incarnate.

Here’s what National Geographic has to say about the King Cobra:

“The king cobra—one of the most venomous snakes on the planet—can literally “stand up” and look a full-grown person in the eye. When confronted, they can lift up to a third of its body off the ground and still move forward to attack. Fortunately, king cobras are shy and will avoid humans whenever possible. It will also flare out its iconic hood and emit a hiss that sounds almost like a growling dog. King cobras can reach 18 feet in length, making them the longest of all venomous snakes.

King cobras live mainly in the rain forests and plains of India, southern China, and Southeast Asia, and their coloring can vary greatly from region to region. They are comfortable in a variety of habitats, including forests, bamboo thickets, mangrove swamps, high-altitude grasslands, and in rivers. This species feeds mainly on other snakes, venomous and nonvenomous. They will also eat lizards, eggs, and small mammals. They are the only snakes in the world that build nests for their eggs, which they guard ferociously until the hatchlings emerge.”