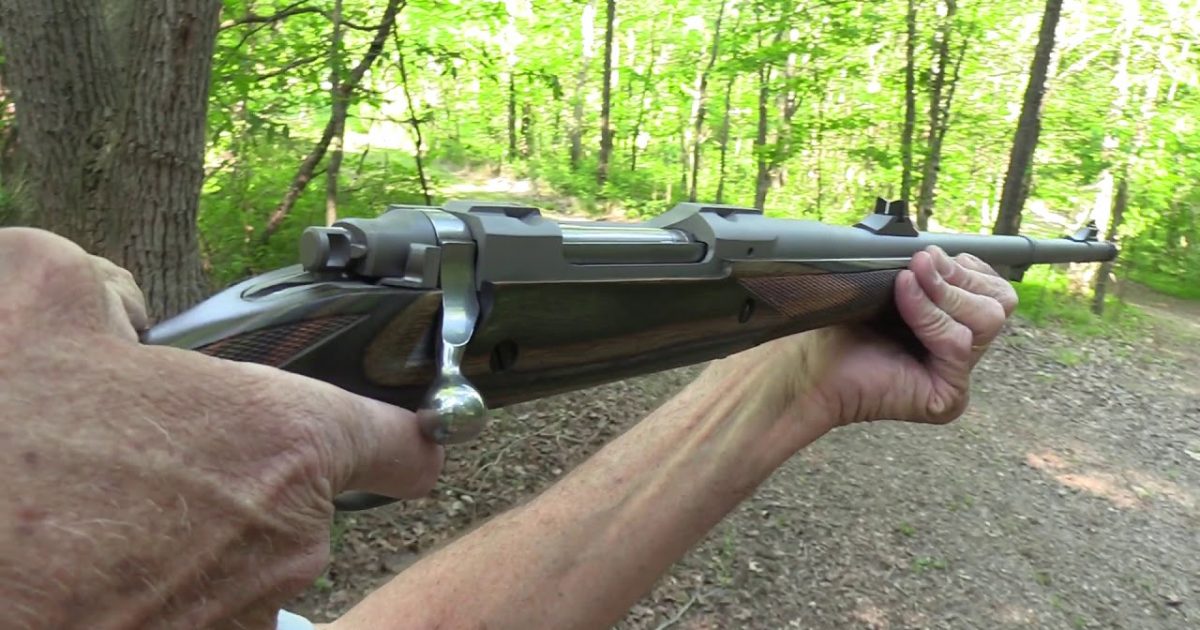 Facebook Twitter
Our old buddy Hickok45 is back and this time, he’s giving us his impression of the Ruger Hawkeye Model 77 Guide Gun .338 Win Mag. I am definitely a fan of Ruger’s products, they’re made exceptionally well and they are awesome guns to own. The only thing makes he a little hesitant, is the cost. Ruger firearms are always on the expensive side, but if you do decide to shell-out your hard earned cash for one of their guns, it will certainly last you a lifetime.
The average cost of this particular rifle, is between $899.00 on up to $1200.00. Like I said, a little on the expensive side, but, if you want a rifle that will stop a charging Grizzly, then I guess the cost won’t be an issue. One thing is for sure, this rifle will never let you down when you need it the most.
Now, about the Ruger Model 77:

From the beginning, the Ruger M77 was intended as a modernized Mauser 98, though numerous changes were made. Bill Ruger wanted to use investment casting in place of a forged receiver. The Sullivan-designed bolt dispensed with the Mauser blade type ejector and instead used the simpler plunger style of ejector. A two-position tang safety and redesigned trigger system were also designed from scratch.

Perhaps the most novel feature of the M77 is the only one that has not been redesigned, the angled action screw. The front action screw of traditional bolt-action rifles draws the receiver directly down against the stock. The M77 uses an angled screw that draws the action down and to the rear, tightly bedding it against the stock.

In 2006, Ruger introduced new features and a new name for their rifle, the Hawkeye. Major changes were made to the trigger system and the stock was recontoured, but otherwise the rifle remained unchanged. The LC6 trigger addressed complaints from consumers about the Mark II trigger to make it safer than the earlier design. The LC6 trigger is lighter and smoother.

About the .338 Winchester Magnum:

The .338 Winchester Magnum is a .338 in (8.6 mm) caliber, belted, rimless, bottlenecked cartridge introduced in 1958 by Winchester Repeating Arms. It is based on the blown-out, shortened .375 H&H Magnum. The .338 in (8.6 mm) is the caliber at which medium-bore cartridges are considered to begin. The .338 Winchester Magnum is the first choice among professional brown bear (specifically grizzly bear) guides in Alaska to back up clients where a powerful stopping caliber is required on charging bears. It is also the most popular medium-bore cartridge in North America and has the most widely available choice in rifles among medium bore rifles.