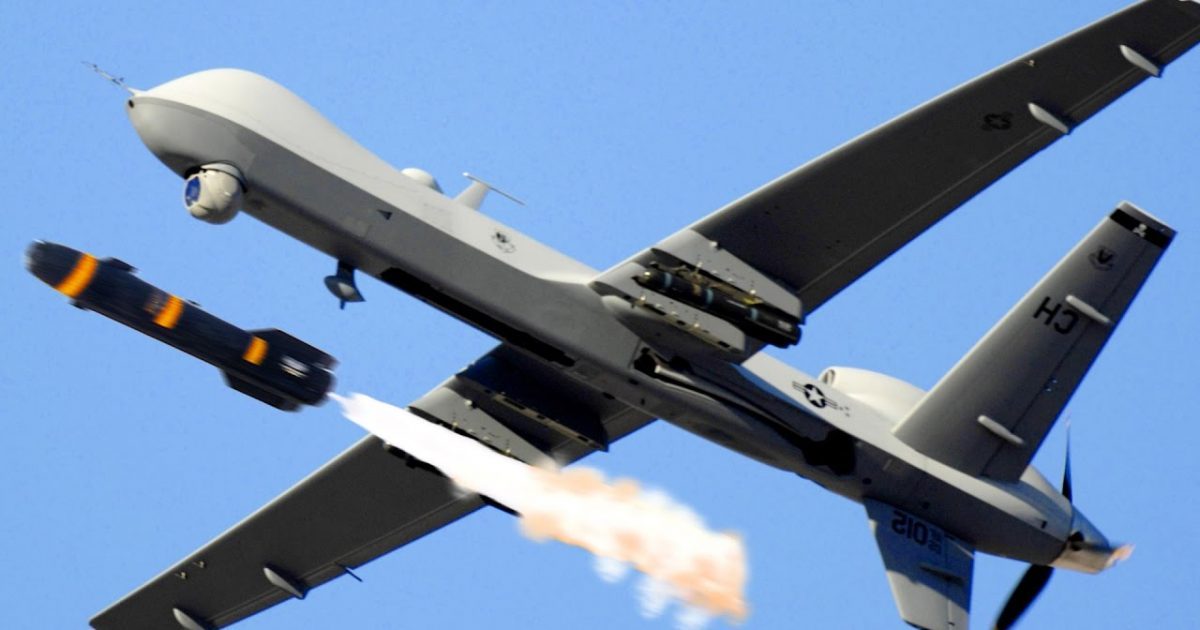 When it comes to drones, there is nothing scarier than the MQ-9 Reaper. Now I don’t know if this weapon has it own catchphrase or not, but let me donate one: “You can run, but you can’t hide from the reaper”. If you think about it, that’s not too far-off from the truth now is it ? These strike drones are taking the place of manned aircraft, so there is no fear factor involved at all. The “pilot” sits in a perfectly safe location while flying the drone and he has a better view of his target.

These little babies tend to make the bad guys crap in their pants…right before they atomize them that is. That seems to be the Achilles’ heel for our enemies in the middle east, oh sure they have a good inventory of troop weapons, rifles, mortars and some artillery, but they have no equipment that allows them to take to the air, so they are limited to staying on the ground. And 9 times out of 10, they don’t even know they’ve been targeted by a drone, until it’s too late.

Here’s some info on this beauty courtesy of Wikipedia:

The General Atomics MQ-9 Reaper (sometimes called Predator B) is an unmanned aerial vehicle (UAV) capable of remotely controlled or autonomous flight operations, developed by General Atomics Aeronautical Systems (GA-ASI) primarily for the United States Air Force (USAF). The MQ-9 and other UAVs are referred to as Remotely Piloted Vehicles/Aircraft (RPV/RPA) by the USAF to indicate their human ground controllers. The MQ-9 is the first hunter-killer UAV designed for long-endurance, high-altitude surveillance. In 2006, the then–Chief of Staff of the United States Air Force General T. Michael Moseley said: “We’ve moved from using UAVs primarily in intelligence, surveillance, and reconnaissance roles before Operation Iraqi Freedom, to a true hunter-killer role with the Reaper.”

The MQ-9 is a larger, heavier, and more capable aircraft than the earlier General Atomics MQ-1 Predator; it can be controlled by the same ground systems used to control MQ-1s. The Reaper has a 950-shaft-horsepower (712 kW) turboprop engine (compared to the Predator’s 115 hp (86 kW) piston engine). The greater power allows the Reaper to carry 15 times more ordnance payload and cruise at about three times the speed of the MQ-1. The aircraft is monitored and controlled by aircrew in the Ground Control Station (GCS), including weapons employment.