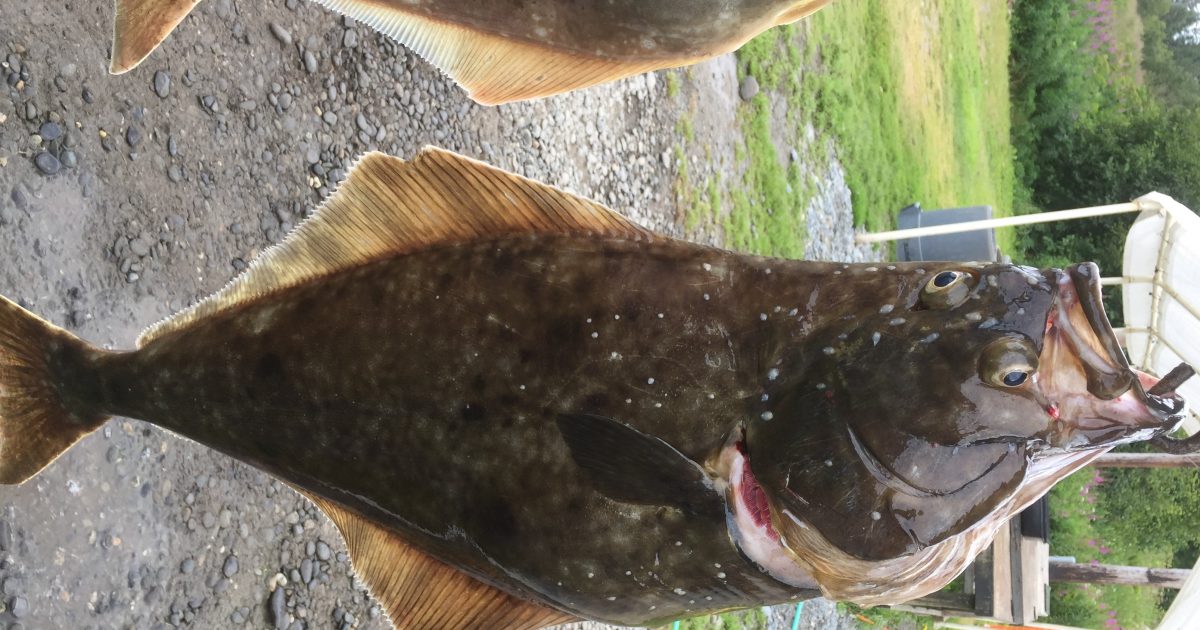 Ahh Alaska, my favorite place for hunting and fishing adventures! Having lived on Kodiak Island for three years and then returning a few times to the Kenai Peninsula and Ketchikan, I have always made fishing a priority. Especially for Pacific Halibut which is not only fun to fish for but fantastic table fare! But beware, this is not like fishing for bluegill or crappie with your Zebco 33 in a farm pond!

Best described as a flounder on steroids, halibut (aka “butts”) can range in size from less than 100 pounds, referred to as “chickens” all the way up to over 500 pounds. So, when you go fishing for them you never know what sizes you can get into. The chickens are actually considered to be the best eating and typically, the ones over 100 pounds are usually the big breeding females. Depending on where you’re fishing, the limit and size regulations can be different so be sure and check the regulations before you go out.

The most common methods of halibut fishing are either jigging or using bait such as herring, salmon heads, squid, and octopus. Big circle hooks from size 16 to 20 are typically used for these baits, tied in with line in the 80 pound test range. The rods remind of a pool stick with eyes and big reels, capable of holding several hundred feet of line for fishing deep water to 400+ feet deep. Do your research and check references for a good boat/captain to take you out as they’re worth it.

One of the things that surprised me was the amount of lead weights used to get your bait to the right depth, sometimes several pounds. The currents and tides in some areas are incredibly strong and sometimes even several pounds are not enough. My last time halibut fishing off the Kenai Peninsula I had five pounds on mine and when the tides changed my line was going straight out of the boat like I was trolling. We quit fishing then.

Fishing with bait is similar to catfishing in rivers except you fish just off the bottom to allow the bait scent to travel in the current. You don’t have a bobber or cork on your line, but you watch the tip of your pole for bites/hits. The tip usually starts to bounce lightly as the bait is nibbled on until it is taken into the mouth. When this happens, you don’t jerk to set the hook, you take the slack out of the line and lift up to roll the circle hook inside its mouth to set it. If you jerk you will either tear the roof of the halibut’s mouth pulling the bait out or just pull it out.

My second time out for halibut was on a charter out of Kodiak. I was set up with two baited circle hooks, one at the bottom a foot above the weights, and the other 6 feet up the line. Approximately 30 minutes after dropping my bait over the side I started to get some action, watching my rod tip start to bounce. Patiently I waited for the bend and when it came I gently removed the rod from the rod holder, reeled down to get rid of the slack and lifted the rod. When I did, I got its attention in a BIG way!

Never have I had a strike so hard that the fishing pole was jerked out of my hands but that nearly happened! Bracing myself against the railing and leaning back I fought to hold my own as the rod bent over in a near semi-circle. One of the crew came up and adjusted my drag so I wouldn’t break the line. The fight went on for what seemed like an hour but in reality was about 20 minutes. The fish made two hard runs, fighting for its freedom.

Slow progress was made trying to bring it up, but I started making headway, keeping constant, steady pressure on the line. We finally started to see color under the boat as when it became obvious there both hooks had ‘butts” on them! What really got my attention was the bottom fish was huge, nearly three times the size of the upper fish! Then they decided to make one last run and down they went. That is when I felt the load lighten as the bottom fish actually broke the hook.

After that I was able to bring the fish up to the surface where it was clubbed and brought aboard. I was tired but happy as they weighed that small fish, tipping the scales at 74 pounds. I can only imagine the size of the one that got away!

Jigging for halibut can also be productive if they are being aggressive but requires more work since you will actively be working the rod. The majority of the time they tend to strike on the way up so be aware. Obviously, that’s not always the case. I like to jig once other scented baits have been in the water and halibut have been found in the area as this is when their predatory instincts kick in.

Since halibut can grow to large sizes it can be dangerous trying to bring them into the boat alive. People have been known to be injured by a big “butt” flopping around on deck. Broken legs, ankles, and on rare occasions knocked unconscious have happened. The first time I went out with a buddy in a 25 foot long boat similar to a Boston Whaler, he caught a 70 pound halibut and after gaffing it, brought it aboard still very much alive. We both dodged it while it flopped, and it broke the fire extinguisher mount on the side of the console. Lesson learned.

The usual procedure is to either hit them with a club, stab with a short harpoon tied off to a buoy or in some cases, shoot it with a pistol or .410 shotgun. And yes, all head shots while still in the water. Then they can be safely brought aboard without issue.

Once you have hooked one, prepare for a fight, even from the small ones. Because they are flat, horizontal swimming fish you are pulling against all of that surface area trying to bring them up.  Take your time, especially with the big ones as you can potentially straighten the hook or even pull it loose. The bigger ones will usually make several runs back to the bottom so don’t try to “horse” them up by sheer power.

It’s likely you may catch other species as well. Lingcod, yellow-eyed rockfish, small sharks, and Irish lords (also known as “double ugly’s”) are frequent inhabitants of halibut waters. The first two are great eating, the other two should be released and besides, the double ugly is mostly one giant mouth!

One of the top Alaskan fish to eat, there are many recipes for halibut, my favorite being Halibut Olympia. There are many variations of it, but this is the way I was taught by an Alaskan chef.

Preheat oven to 375 degrees, caramelize the onion and with the melted butter place half on the bottom of a 13X9 inch baking dish. Squirt the lemon juice liberally over the fillets, then add the half of the onions and butter over them as well. Combine the mayonnaise and sour cream, spreading the mixture over the fillets. Sprinkle the crackers on the mixture covering well, and finally top with the paprika. Bake approximately 20-25 minutes or until browned and the fish flakes with a fork. Pair with a nice white wine and sides of vegetables or even a baked potato with your favorite toppings. You can thank me later.

If you make it to coastal Alaska from mid-May to around Labor Day, do yourself a favor and book a halibut charter for a day or two. You’ll be glad you did and experience world class fishing while making world class memories.