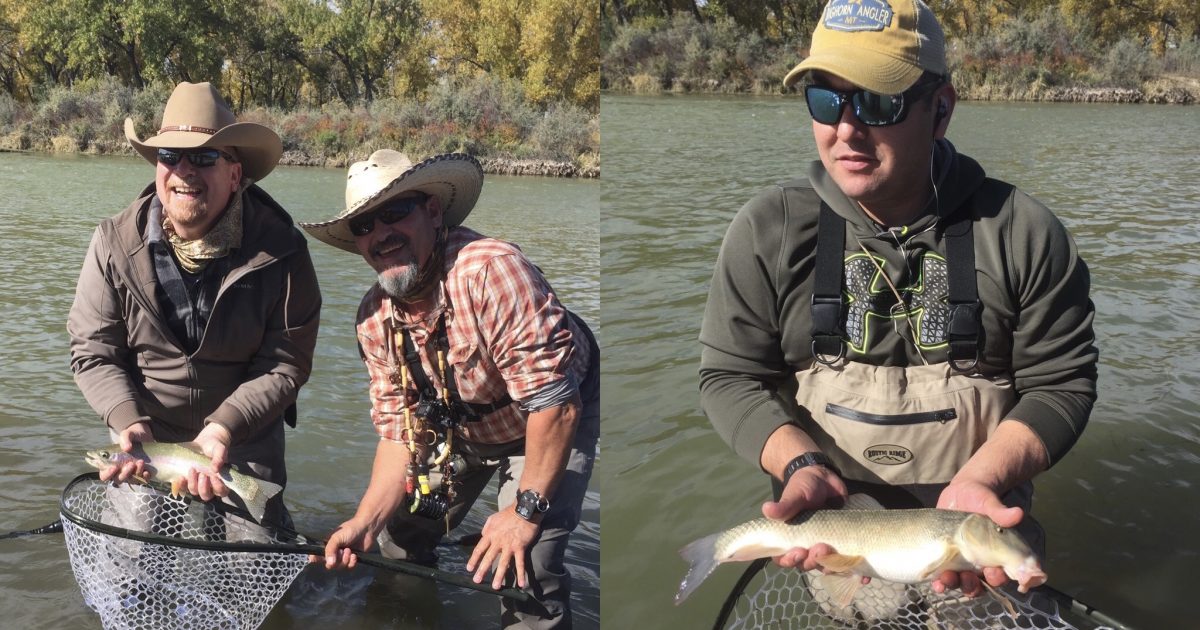 To most people, when they hear the word “Bighorn” they usually think of the Little Bighorn battle where General Custer and his command were wiped out by the Native Americans. Or they think of Bighorn Sheep. I have visited the Little Bighorn, spending an entire day going through the haunting battlefield in southern Montana. But this is about the Bighorn River nearby, a legendary place in the fly fishing community.

October 2017 found me traveling up Interstate 25 out of Denver, north through Wyoming to Fort Smith, Montana. My traveling partners were Sam Erskine, my mentor for the trip, and Vince (Doc) Parsons, a former Army medic.  The three of us were in a larger group of mentors and disabled vets from our Denver chapter of Project Healing Waters Fly Fishing (PHWFF). We were going to spend a week on the Bighorn, floating it in drift boats and fly fishing.

Rated as one of the top nonprofit organizations for disabled veterans by the Veterans Administration, PHWFF’s motto is “Healing Those Who Serve.” They teach fly fishing, fly tying, and how to build fly rods from scratch. When ready, they take veterans on fly fishing trips with a volunteer mentor assigned to each fisherman. All of this is done at no cost to the veteran.

In total there were 12 of us including 4 veterans, the rest were either mentors or coxswains, distributed one of each to a boat. Two cabins in Fort Smith were graciously donated to our group to house us for the week. The plan for the week was to drift and fish and occasionally get out and wade fish some well-known locations along the river known to hold fish. Primarily we were after the many rainbow and brown trout that occupied the 13 miles we drifted through the Crow Indian Reservation. Afterbay Dam, above our put in location, regulated the flows with clear, cool, steady water, great for year-round fishing.

There is always something special about the first morning of fly fishing in a new location. It was a cold, crisp morning at the boat launching site, steam rising off the water as our crew readied the boats. As the sun was just on the horizon we loaded our fly rods, food, and gear into the boats I could hear an eagle flying overhead. Walking down to the waters edge I could see trout rising in several different places. It was going to be a great day and great week.

I was fortunate to have Sam as my mentor and Charlie Martinez as our coxswain, both experienced fly fishermen. Although that was their designated roles for the trip we all took turns fishing and they both taught me a ton. As it turned out, Charlie is a human fish magnet and it occasionally rubbed off on us. He could cast into some of the most unlikely looking places and catch fish while we were just drifting from one place to the next. Sam and I were mostly along for the comedic support, cracking jokes and laughing all the time.

My own fly fishing career started in 2013 while stationed at Fort Leonard Wood, Missouri where I learned how to fly fish through the local PHWFF chapter. Between Sam and Charlie, they had a combined 50+ years of fly fishing experience so I was in fine company in that drift boat. To say my fly fishing skills improved greatly that week from the first day to the last would be a severe understatement. From overhead casts, roll casts, back casts, and mending my line properly I saw my catch totals go up every day.

That section of the Bighorn held not just trout but black crappie, largescale sucker, and whitefish that our group caught! Doc caught a beautiful sucker (right picture) that gave him a great fight and we all thought it was a big brown until it surfaced. It was rare for us to stop anyplace and not catch something, even with the all the other boats on the river. The Bighorn is loaded.

We fished mostly a local sow bug fly called the “Ray Charles” and it seemed everything wanted to hit it! Also successful were the San Juan Worms, and Elk Hair Caddis, and any scud patterns we cast using rods in the 5/6 weight range. As they say in fly fishing, “The Tug is the Drug” and it was that way all week. I caught my personal best brown trout at 16 inches long, and rainbow trout at 17 inches with Sam netting it (left picture). We practiced catch and release to allow others to enjoy the waters as well.

The whole area was teeming with wildlife. We had mule deer in the front yard of our cabin every day, bald eagles and osprey were all up and down the river. One day a red fox decided to follow us down the river for several hundred yards looking hungry. Flocks of mallard ducks were also seen daily, jumping them out of one of our wading spots.

It was a phenomenal week of fellowship with our group, especially in our boat and the others in our cabin. All of this would not have been possible without the great folks at Project Healing Waters Fly Fishing. Fishing the legendary Bighorn will get to be a habit I always look forward to, especially with guys like these!