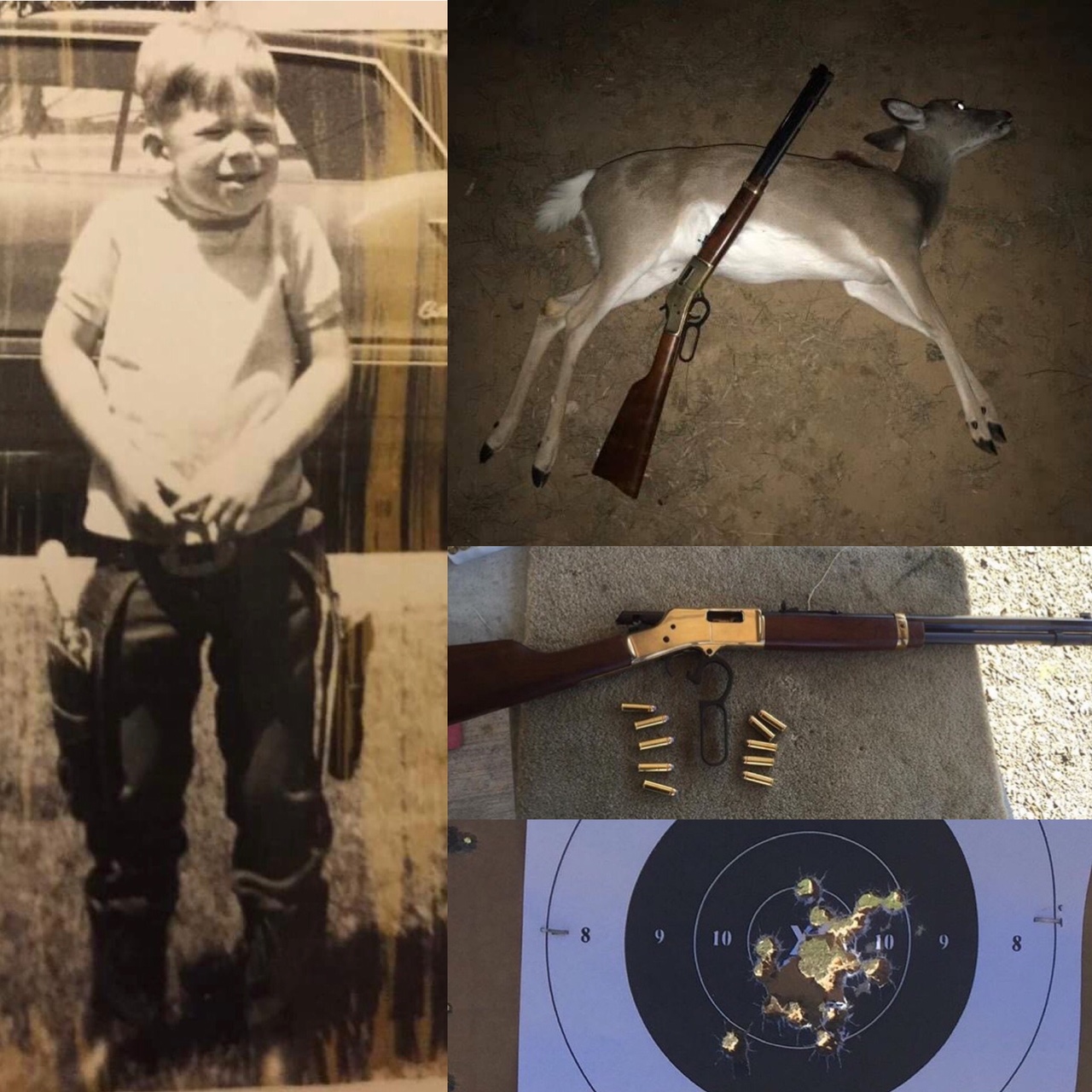 Growing up in Oklahoma, my childhood pastime was spent taming the badlands in my neighborhood of villains and bad hombres trying to steal cattle and the rancher’s daughter (left picture circa 1974). Influenced by John Wayne, Roy Rogers, Jimmie Stewart and tv shows like Bonanza, High Chapparal, Rawhide, the Big Valley, and countless other westerns, is it any wonder I developed an infinity for lever action rifles and six shooters? I will tell you that these so called “old fashioned guns” are still relevant in the hunting world today.

Shooting left handed, I enjoy the ambidextrous lever action, of which I own several Henry and Winchester rifles. My first hunting firearm was a bolt action Stevens .410 shotgun, but it was right handed. When I was old enough to buy my own firearms, I vowed to either buy left handed bolt actions or an ambidextrous action. I am left eye dominant although in all other aspects I’m right handed. I could work to change my eye dominance but have chosen not to, as my left eye needs no correction being 20/20 and my right eye 20/100.

Let’s talk about calibers for lever guns, one of the most famous being the .30-30 Winchester, formerly known as .30 WCF (Winchester Center Fire). It has been written many times that the .30-30 has taken more deer in the thick northeastern forests of the U.S. than any other caliber. It’s still a great cartridge today with bullet weights available up to 180 grains but typically loaded in 170 and 150 grains. Like any other bullet, shot placement is key and it is still a productive, relevant round for medium size animals such as deer, black bear, feral hogs, and the like.

Another round popular with the lever gun crowd is the first military cartridge developed in America, the .45-70 Government. Bullet weights that I have for mine range from 250 to 430 grains and with the right bullet, will take any animal on the North American continent. I’m hunting with my .45-70 way more this season because of this versatility. Just remember the heavier the bullet the more recoil you’ll get when you send it downrange.

Last year I hunted with my Henry Big Boy in .44 Magnum, yes the popular handgun cartridge, in a lever action rifle. How did it do you ask? I took a nice whitetail doe cleanly here in Texas at just over 40 yards with open sights (top right picture). For me, open sights and peep sights are the way to go on lever guns. My Henry is plenty accurate with open sights, the bottom right picture is at the range shooting offhand at 50 yards.

In my opinion the aesthetics and clean lines of these firearms is best WITHOUT scopes or red dot optics. Just like any shooting, it takes practice to get used to using open sights and peep sights. Don’t think peep sights are accurate or allow for shooting out to long distance? In the Marine Corps we qualified with our M16’s with peep sights shooting human torso size targets out to 500 meters routinely.

Because most lever guns are tubular fed, with the exception of the Browning BLR and some of the Henry’s, the bullets are round or flat nosed. This is by design so that the rounds stacked end to end in the tubular magazine beneath the barrel, don’t detonate from the point of one round resting up against the primer of the round in front of it during recoil. Round and flat nose bullets obviously aren’t as aerodynamic as pointed bullets, so the air drag on them is more and they won’t fly as long a distance. This lends to more of a rainbow trajectory at longer distance than the pointed/spitzer nose bullets.

But my preference is hunting as close to my game as possible, enjoying the intimacy of hearing and sometimes actually smelling it, not just seeing it. When I do finally see my quarry, it’s already within range therefore, I like to hunt in thick or marginally thick cover. My firm belief is that you should get as close as possible, which provides a larger target and a higher chance of successfully hitting the vital areas to quickly kill. We owe that to our prey.

Many hunting friends of mine have lever action rifles that have been passed down from generation to generation. They are still viable and formidable weapons but if you’re not sure about hunting with one, take it to a gunsmith and have it checked out. Once checked by a gunsmith, go put in time with it at the range and become proficient with it. These great guns are still lots of fun and provide great service in the field. Get out and hunt with them, even if the villains and bad hombres are mostly gone these days.