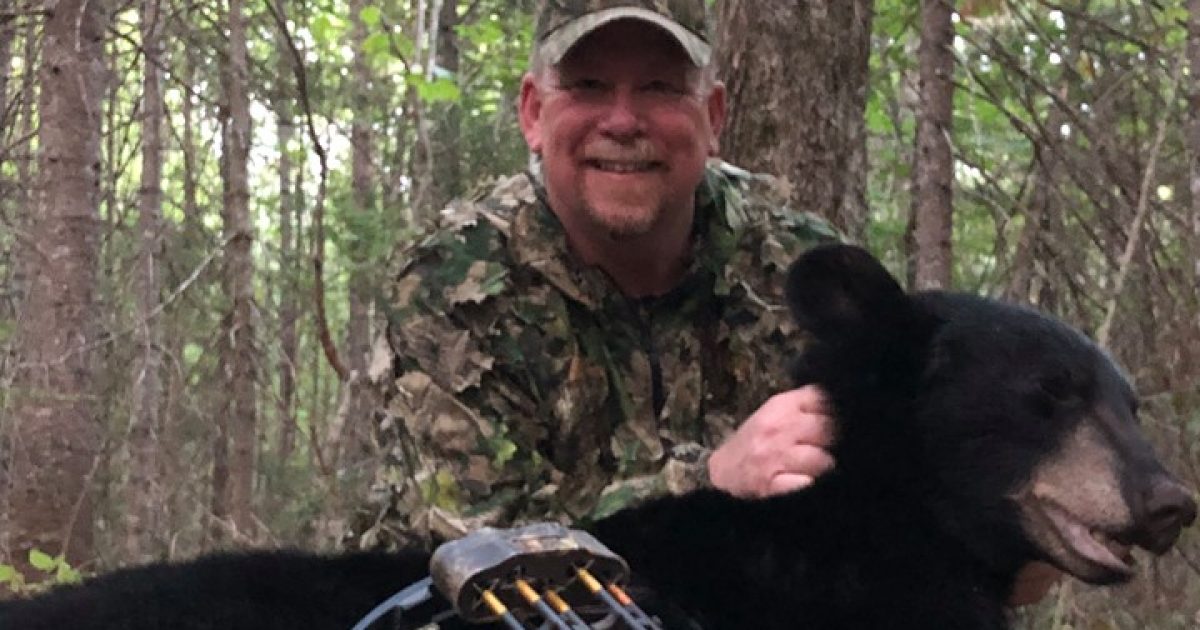 Humans are predators. We have been since the beginning of our existence. With forward facing eyes and the presence of our canine like teeth, we are hunters, designed to eat meat, it is in our DNA. Of course, we are not the only predators in the outdoors and all predators hunt other predators as well. Need a reminder? Try your hand at black bear hunting, with a bow.

Most of us started our hunting careers pursuing small game, deer, or some other prey animals. Animals that are by their very nature, afraid of us. Black bears on the other hand, are not always afraid of us and their relatives have been hunting on this earth much longer than we have. They have honed their skills and like humans, are omnivorous, taking advantage of what food sources are available to them.

In August 2019 I was fortunate to go on a guided black bear hunt in Eagle Lake, Maine with Mark Belanger’s Borderline Guide Service. Mark has been guiding for 23 years, runs between 70 and 100 bait sites on land he leases from one of the local timber companies and has been hound hunting for 31 years. I won the hunt through their donation to Changed By Nature Outdoors, a nonprofit I wrote about in my previous article on my first elk hunt. This was my third attempt at bear hunting as I had hunted Idaho twice in 2016 with another outfitter where I only saw small bears that I would not shoot. My buddy and fellow disabled veteran Randy Hargis accompanied me.

For years I have researched black bear hunting through books, magazines, TV shows, videos, and talked with other experienced hunters. I have always believed that if you are going to hunt an animal, you owe it to the animal and yourself to learn as much as possible about your intended prey. Things such as the biology, life cycle, and habits are all important in making your hunt successful. Bears in general are the hardest animals to judge because they do not possess horns or antlers and even their thick coats make it difficult to determine their sex. Females may be harvested but not if they have cubs.

Hunting over a bait barrel allows you the time to observe the bear to determine if it is of the right size and not a female with cubs. By no means is hunting over bait a slam dunk, my two previous hunts proved that. One thing I remember from my research is how quiet bears can come into the bait. Their soft padded feet make them very stealthy. One minute there is nothing at the bait barrel, then the bear is standing right next to it, appearing seemingly out of thin air.

On my first evening sitting in a ladder stand 15 feet up against a tree and 28 ranged yards from the barrel, the predator came in loud which surprised me. He owned the woods. Maine also has a high population of moose, and when the big boar came in I thought that was a moose because of the noise he made. I heard him for 10 minutes coming through a clear cut into the bait, breaking branches, crunching as he walked through the leaves. When he appeared behind the barrel he was huge, the top of his back a good six inches above it. I had to do a double take to realize it was a bear and not the moose I expected. I was not ready for him, my bow laying across my lap, as I thought I was about to take a picture of a moose! To this day I wonder if he made all that noise to let me know he knew I was there.

Moving slowly, I tried to pick my bow up and prepare for the shot, but he was having none of it. He put his nose in the air, smelling for his opponent, and quietly ambled away. What an encounter, it only lasted about 30 seconds, I shook from excitement, grinning from ear to ear! The site of that brute has been etched in my memory for eternity.

The next day we repositioned my stand on the tree for a better angle for me to shoot from as I am left-handed. That evening passed without any sightings except for the myriad of squirrels that seemed to be everywhere.

On day three we rebaited the barrel as it had been hit during the night and emptied. I remembered from the previous night’s sit that there were some branches from a downed tree between the bait and my stand that were obscuring my view of the right side of the barrel, so I trimmed them down. Climbing into the stand around 2:00 pm I settled in. This wood lot I was sitting in was at the corner of a crossroad and everyday logging trucks were using it, passing through on average every 45 minutes, within 50 yards of my stand.

A logging truck passed behind me, just on the other side of the trees, rattling down the road. I glanced over my shoulder in its direction as it seemed louder than most. When I looked back at the barrel there was my bear, standing right in the opening that I had cleared of the branches earlier. He was not the giant from the first night, but he was beautiful, and I wanted him. My arrow was knocked, my release was hooked to my D loop on my bowstring and I was ready as I watched him to see what he would do.

He cautiously looked around, surveying the area for potential threats and other bears. Standing broadside next to the barrel I waited for him to look away, when his head disappeared behind the barrel I came to full draw and settled my 30-yard pin behind his shoulder. Just as I shot, he turned quartering to me, and I watched as the arrow with its lighted nock, buried deep in his chest between his neck and shoulder. Spinning back towards the direction he came from he sprinted into the woods.  I heard his noisy, crashing retreat for a few seconds, then he made a few guttural sounds of his own, and then silence.

Exhaling deeply, the adrenaline shakes set in as I tried to regain my composure, the realization of what just happened setting in. I sat quietly, listening for any more sounds from the direction I last heard him and checked the time, 4:41 pm, still enough light to track him. After five minutes, I called Mark and let him know and he said he was on his way. Climbing down, I walked over to the spot next to the barrel where the bear had been standing, looking for blood. Nothing.

I went back to my stand and waited for Mark and his father-in-law Rick to arrive. When they did I walked them through my shot sequence and the bears reaction and direction he ran as we began tracking him. We fanned out and started looking for sign. Twenty minutes later I found my arrow, nock glowing, about 50 yards from where I had last seen him running.  Still no blood on the forest floor.

I made a mental note of the location of the barrel and where I found the arrow and used them as my new direction to begin looking in a straight line away from them. You would be amazed how many objects in the woods look like a black bear when you are trying to find one! Twenty slow yards later in my new direction and I saw what I thought was another dark stump or pile of brush. It wasn’t, it was my bear.

Relief swept over me as I knelt next to my bear, putting my hands on him for the first time as I thanked him for giving his life to me. I called out to Mark and Rick and they showed up quickly, also happy, and relieved that I had found my bear. About that time, we got a call that another hunter in our group had also shot a bear so we quickly took pictures and dragged him to the road where Mark could drive up and load him. Driving to the other hunter’s location, we helped track and find his bear in the deep brush just before it got too dark to see.  What a great evening!

It was a fantastic week in the north woods of Maine, hunting the primal predator. I wound up with some great sausage, burger, and roasts from my bear along with a beautiful hide that I am waiting to get back from the taxidermist as a rug. Unfortunately, Randy didn’t get his bear, but we made new friends with a group of guys from Ohio. Mark runs a classy operation and I look forward to returning to hunt with him again. I greatly appreciate him donating the hunt to Changed By Nature Outdoors and to that organization for their dedication to disabled veterans.