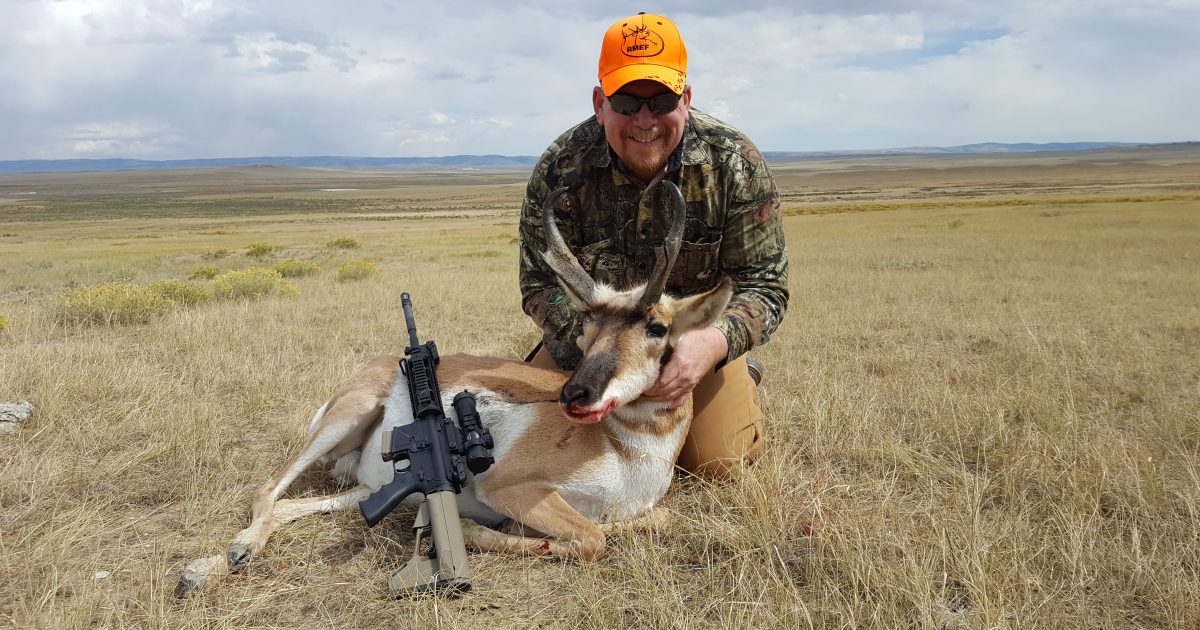 Pronghorn antelope, affectionately known as speed goats, are an iconic animal of the American West. Widely known as the fastest mammal on the North American continent, they are capable of speeds in excess of 60 mph because of their oversized heart, lungs, and light bone structure. They are built for speed. One thing many don’t know about them is that they have fantastic vision, equivalent to eight power binoculars which suits them living in the open prairies. In 2017 while living in Colorado, I drew a nonresident Wyoming pronghorn tag for a unit just west of Laramie.

I didn’t know much about the unit, but my friends Chad and Rena Parsons did. As long time Laramie residents they had hunted it several times. Fortunately, they offered to help show me around and do some pre-season scouting.  The unit was all rolling prairie with little vegetation interspersed with occasional small creeks and ponds.

It was not difficult to find speed goats, they were literally everywhere. Locating a respectable buck on either public land, walk-in hunting access to private land, and hunter management areas was the key. I purchased a map that had these areas marked on it and then periodically went back to the Wyoming Game and Fish Department (WGFD) website to check for any changes to it.

We spent an entire day driving around and through the unit, learning the lay of the land, finding water sources, feeding areas, and glassing up bucks at every opportunity. Early season hunting usually means spending time around water where pronghorn need to water often in August and September. I purchased the necessary additional permit to be able to hunt both the archery and rifle seasons. Archery started August 15th while the rifle opener began September 15th.

I picked a water hole to hunt over from a ground blind and set it up, camouflaging it into the bank the night before the archery opener. The next morning, I quietly slipped into it in the pre-dawn light after setting up a buck silhouette decoy on the opposite bank. No antelope came in all day, but I was entertained by a small flock of Green-winged Teal that fed and swam around for hours.

At one point, a small hawk swooped in and tried to catch one of the teal and missed, landing in the water. The teal launched off the water, circled, and then landed about 10 feet from the hawk.  The hawk struggled and swam to the nearest bank, hauling itself out of the water and stood there with its wings spread, trying to dry out. In the meantime, the teal swam up within four or five feet of it and began quacking at it loudly. They seemed to know the hawk could not fly and they were giving it an earful! Hilarious!

Approximately 30 minutes went by and the hawk was dried enough to be able to fly again, leaving after being taunted by the teal the entire time. I hunted out of that blind for several days and never had antelope come in. That part of Wyoming had received lots of rain over the summer so there was more water than normal. The availability of water in the unit did not concentrate them as usual.

I also tried my hand at stalking them over the next couple of weeks, but it was extremely difficult when competing with their excellent vision.  The closest I ever got was about 70 yards, too far out of my bow range. When the rifle opener arrived, I was ready. My weapon of choice was going to be my AR-15 in .223 shooting the 62 grain Barnes TSX round, topped with a 3 power Burris scope. Legal to use in Wyoming, the .223 round must weigh a minimum of 60 grains.

Opening day of the rifle opener I checked with Chad and Rena to see if either or both wanted to come along to assist. Chad was out of town on business, but Rena volunteered to help me spot my quarry, so I swung by their house and picked her up. It did not take long to find a decent buck on accessible land, and we made a stalk. Unfortunately, I missed, and he trotted out of range.

We moved about 200 yards along the bottom of a ridge in some unusually tall grass and located another buck. He was feeding out in a grassy bottom with a doe and fawn. We moved into position, trying to get as close as possible without being seen. I ranged him at 206 yards and lay my rifle across my pack to steady my aim.

When he turned broadside I fired, hearing Rena over my shoulder watching through her binoculars call out “hit.” Then the sound of the bullet impact came back to me. The buck stiffened up and didn’t move. I put another round him and he went down! As usual, the adrenaline shakes kicked in and I was grinning from ear to ear.

Rena slapped me on the back and offered her congratulations as I just watched across the grassy bottom at my buck. Putting my pack on we made the walk over to him and I was tickled pink at my first speed goat. We took a few pictures and Rena went back to the truck to retrieve my drag line I forgot to pack. As usual, I spent a few quiet moments with my prey, thanking him, reflecting on the moment.

I began the process of field dressing him while she was gone to quickly get him out of the field, butchered and cooled down to prevent meat spoilage. After dragging him to the truck, we made a B line to her house and got him hung from the gambrel in their garage. There we finished skinning him and getting him broken down, put into game bags, and into my big cooler with ice.

Rena is also a talented taxidermist and I left the buck’s head with her. She did a fantastic job cleaning and bleaching the skull and it is a beautiful European mount in my home. After keeping the meat chilled for five days, I processed him at home and contrary to what some people told me, he tasted fantastic.

Speed goats are plentiful across the west. If you have not done so yet, you should try your hand at hunting them. It is even more fun when you get to do it with great people like Chad and Rena Parsons who I greatly appreciate.