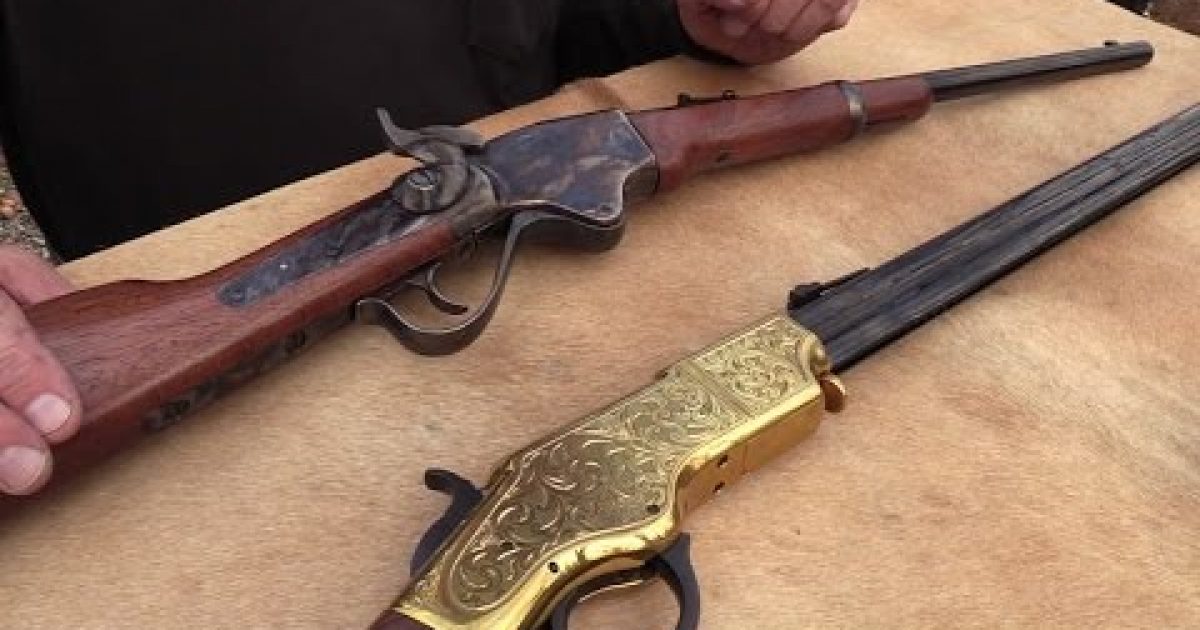 Sometime ago, I wrote an article comparing these two awesome rifles, but sadly, YouTube took that video down and so, I felt compelled to do another piece about them., this time I am using our old buddy and gun expert, Hickok45. If you’ve never watched on of this guy’s videos before, then you’re in for a treat, say what you will about Hickok45, but one thing is certain…he knows his guns.

Today you’re in for a treat, because the two rifles spotlighted are not only awesome, but  are genuine historical firearms dating back to the Civil War and not only are they great to look at, but they were also truly ground breaking technology for the time. Both the Spencer and the Henry were “repeating rifles”, and fired cartridges out of a tube fed magazine coupled with a lever-action mechanism which allowed the soldiers back then to have a weapon capable of putting some serious ordinance down-range at the enemy.

About the Spencer Rifle:

The Spencer repeating rifles and carbines were early American lever-action firearms invented by Christopher Spencer. The Spencer was the world’s first military metallic cartridge repeating rifle, and over 200,000 examples were manufactured in the United States by the Spencer Repeating Rifle Co. and Burnside Rifle Co. between 1860 and 1869. The Spencer repeating rifle was adopted by the Union Army, especially by the cavalry, during the American Civil War but did not replace the standard issue muzzle-loading rifled muskets in use at the time. Among the early users was George Armstrong Custer. The Spencer carbine was a shorter and lighter version designed for the cavalry.

The design for a magazine-fed, lever-operated rifle chambered for the .56-56 Spencer rimfire cartridge was completed by Christopher Spencer in 1860. Called the Spencer Repeating Rifle, it was fired by cocking a lever to extract a used case and feed a new cartridge from a tube in the buttstock. Like most firearms of the time, the hammer had to be manually cocked after each round in a separate action before the weapon could be fired. The weapon used copper rimfire cartridges, based on the 1854 Smith & Wesson patent, stored in a seven-round tube magazine. A spring in the tube enabled the rounds to be fired one after another. When empty, the spring had to be released and removed before dropping in fresh cartridges, then replaced before resuming firing. Rounds could be loaded individually or from a device called the Blakeslee Cartridge Box, which contained up to thirteen (also six and ten) tubes with seven cartridges each, which could be emptied into the magazine tube in the buttstock

About the Henry Rifle:

The Henry repeating rifle is a lever-action tubular magazine rifle famed both for its use at the Battle of the Little Bighorn and being the basis for the iconic Winchester rifle of the American Wild West. Designed by Benjamin Tyler Henry in 1860, the original Henry was a sixteen-shot .44 caliber rimfire breech-loading lever-action rifle. It was introduced in the early 1860s and produced through 1866 in the United States by the New Haven Arms Company. The Henry was adopted in small quantities by the Union in the Civil War, favored for its greater firepower than the standard-issue carbine. Many later found their way West, notably in the hands of the Sioux and Cheyenne in their obliteration of Custer’s U.S. Cavalry troops in June 1876. bModern replicas are produced by A. Uberti Firearms and Henry Repeating Arms. Most are chambered in .44-40 Winchester or .45 Long Colt.

Enough talk for now, so kick-back and enjoy the video.