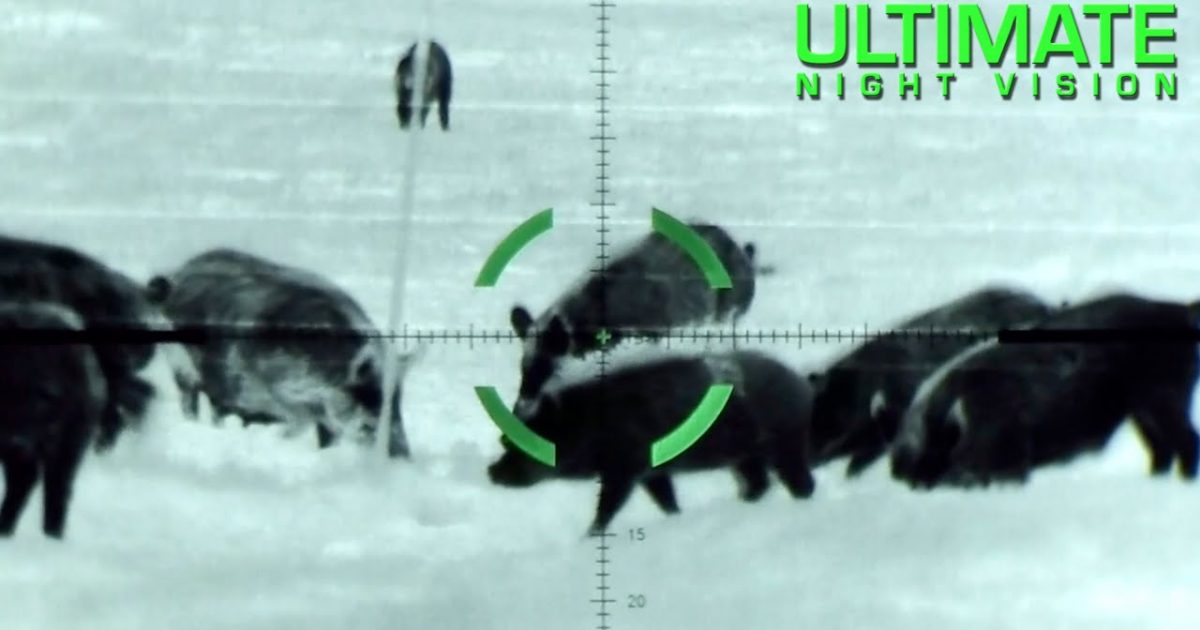 Feral Hogs are a regular menace in Texas, so the Texas Parks and Wildlife Department doesn’t mind if you go out and blast as many as your little heart desires (as long as you have a hunting license). This invasive species goes by many names: wild pigs, feral hogs, razorbacks, and boars. Regardless of what you call them, wild pigs have become a huge issue across the United States, especially in Texas. They destroy land and crops and threaten the wildlife as they reproduce at alarming rates.

It is estimated that there are more than 5 million wild hogs in the United States. Texas is home to more 1.5 million of them and they can be found in 99% of its 254 counties. So why are there so many of them? For starters, because they did not evolve here, they have no real natural predators to speak of. This means that there is no natural mechanism to keep their numbers in check.  To make things worse, a single sow can have two litters of 4-8 piglets in 12-15 months, which compounds the population problem.

In order to understand the scope of Texas’ wild hog problem, we need to understand a little bit about these animals. Sus Scrofa is the scientific name for the group of animals we know as pigs and they are native to Europe and Asia. Because Texas is not their native home, they are known as an invasive species (like fire ants or killer bees).

Technically, a “feral” pig or hog refers to a domestic animal that has returned to wild after escaping or being set free and “wild” refers to an animal that has never been in captivity. However, because of the complicated history of hogs in North America, the terms can be used interchangeably. The transition from a cute pink piglet to a long-tusked, bristle-haired feral hog can take place in a matter of several months as they adapt to the new environment.

About the equipment being used in the video:

*The Trijicon OASYS UTC-Xii is a high-performance thermal clip-on sight which is currently fielded by US Military and elite special operations units. The UTCxii is designed to be used as a pass-through device mounted in front of an existing day scope. The UTC xii is compatible with day optics ranging in magnification from 1x to well over 10x. With a detection range of 2600 meters, the UTCxii is an excellent optic for long-range targeting and surveillance.

The Trijicon OASYS UTC-Xii clip-on is a miniaturized high-performance thermal clip-on designed to pair in front of existing day optics. The UTC xii enhances existing day sight systems with 1x to 10x magnification and is excellent for surveillance and long-range applications. The UTCXii has incredible range as well as the ability to integrate with the RAPTAR-S range-finder and ballistic calculator.

The Trijicon UTCxii system is a small, lightweight, universal thermal clip-on for existing weapon sights. Optimal for surveillance and long-range applications, it delivers performance in all battlefield conditions and pairs with existing day sight systems between 1x and 10x magnification. The unit provides rapid, single-handed start-up and operation of all system controls. With its compact design, it allows users to quickly and easily remove the system without boresight adjustment. Clip the Trijicon UTC x/UTCâ ¢xii on in front of existing day optics up to 10x magnification without needing to re-zero or re-train.