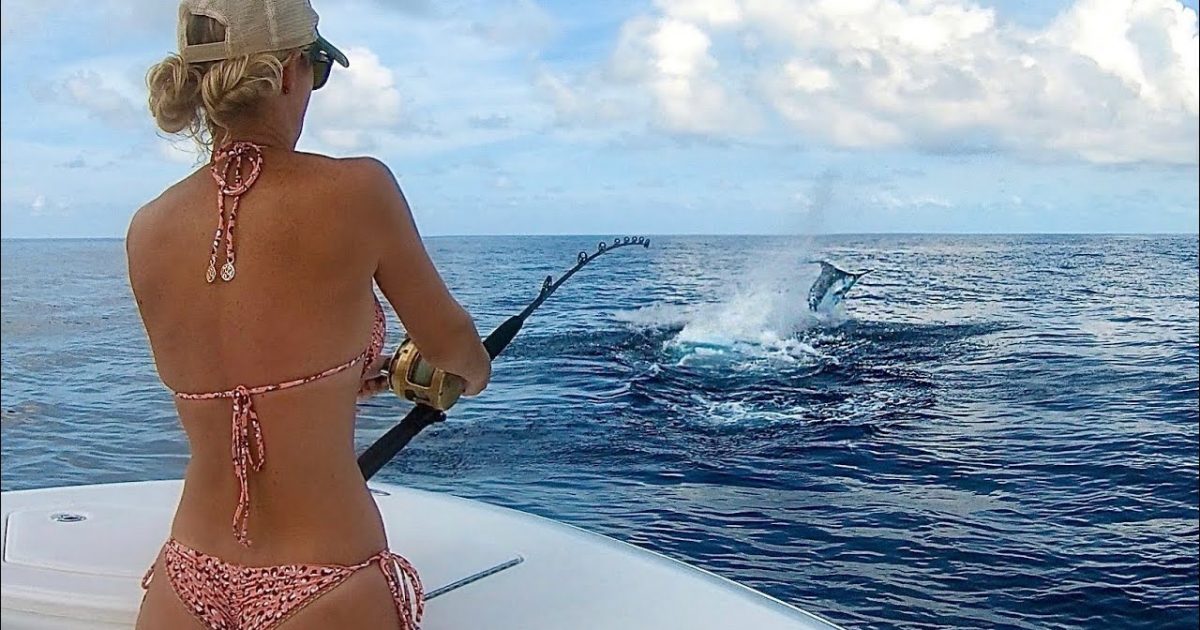 If there’s one thing that I like to watch, it’s one of Vicky Stark’s fishing videos, I mean, this gal is fearless when it comes to fishing !! In the video below, Vicky has her sights set on Blue Marlin and the fact that these darn fish outweigh her by more than 1900 pounds doesn’t even phase her, like I said, she’s fearless!! The Atlantic blue marlin can grow to be 14 feet long and weigh 2000 pounds. Females grow far larger than males. The fish is dark blue along the back which fades to silver on the sides and white on the belly. The Atlantic blue marlin has a long pointed bill, and a steep dorsal fin that runs along most of the body.

About the Atlantic Blue Marlin according to Wikipedia:

The Atlantic blue marlin (Makaira nigricans) is a species of marlin endemic to the Atlantic Ocean. It is closely related to, and usually considered conspecific with, the Indo-Pacific blue marlin, then simply called blue marlin. Some authorities still consider both species distinct.

The Atlantic blue marlin (hereafter, blue marlin) feeds on a wide variety of organisms near the surface. It uses its bill to stun, injure, or kill while knifing through a school of fish or other prey, then returns to eat the injured or stunned fish. Marlin is a popular game fish. The relatively high fat content of its meat makes it commercially valuable in certain markets. It is the national fish of the Commonwealth of the Bahamas and is featured on its coat of arms.

Blue marlin are distributed throughout the tropical and subtropical waters of the Atlantic Ocean. A bluewater fish that spends the majority of its life in the open sea far from land, the blue marlin preys on a wide variety of marine organisms, mostly near the surface, often using its bill to stun or injure its prey. Females can grow up to four times the weight of males. The maximum published weight is 818 kg (1,803 lb) and length 5 m (16.4 ft). Greater lengths have been claimed unofficially.