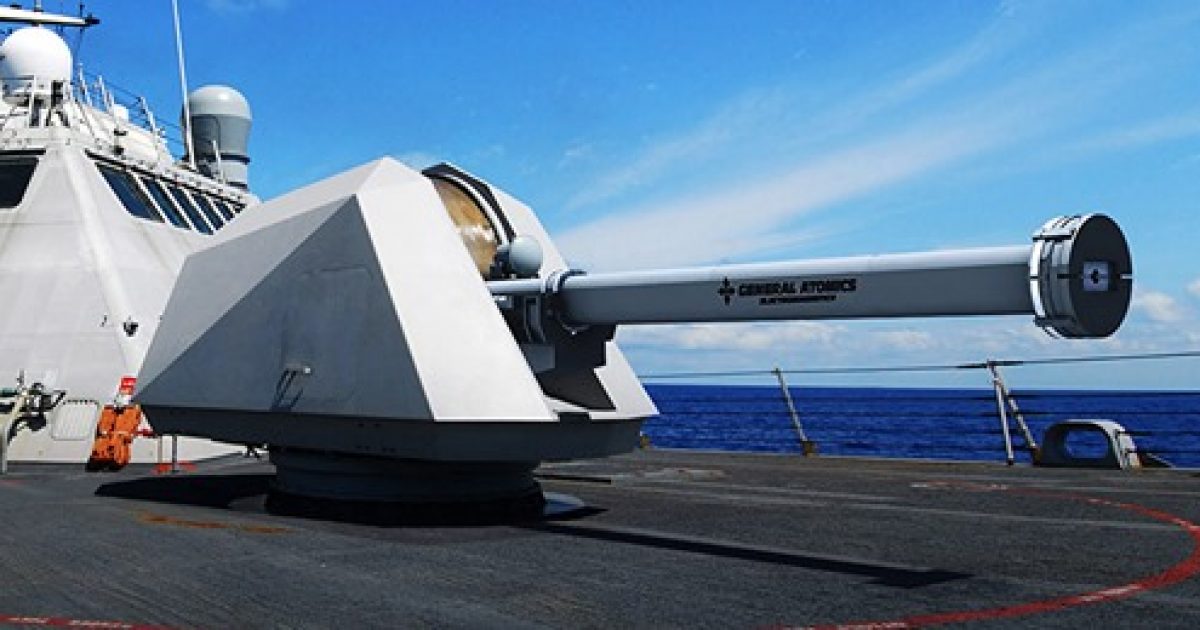 The U.S. Navy is tapping the power of the Force (of Star Wars fame) to wage war. Its latest weapon is an electromagnetic railgun launcher. It uses a form of electromagnetic energy known as the Lorentz force to hurl a 23-pound projectile at speeds exceeding Mach 7. Engineers already have tested this futuristic weapon on land, and the Navy plans to begin sea trials aboard a Joint High Speed Vessel Millinocket in 2016.

“The electromagnetic railgun represents an incredible new offensive capability for the U.S. Navy,” Rear Adm. Bryant Fuller, the Navy’s chief engineer, said in a statement. “This capability will allow us to effectively counter a wide range of threats at a relatively low cost, while keeping our ships and sailors safer by removing the need to carry as many high-explosive weapons.” The massive railgun that needs just one sailor to operate it relies on the electromagnetic energy of the Lorentz force—the combination of electric and magnetic forces on a point charge—for power.

The Navy likes the weapon for several reasons, not the least of which it has a range of 100 miles and doesn’t require explosive warheads. That makes it far safer for sailors, and cheaper for taxpayers. According to the Navy, each 18-inch projectile costs about $25,000, compared to $500,000 to $1.5 million for conventional missiles. “[It] will give our adversaries a huge moment of pause to go: ‘Do I even want to go engage a naval ship?’” Rear Admiral Matt Klunder told reporters.

“Because you are going to lose. You could throw anything at us, frankly, and the fact that we now can shoot a number of these rounds at a very affordable cost, it’s my opinion that they don’t win.” The Navy’s been talking about using railguns for the past ten years. The Office of Naval Research launched a prototype program in 2005, with an initial investment of $250 million committed through 2011. The Navy anticipates spending about that much more by 2017.

Of course the Army is interested in having one too, and the Pentagon is in general interested in many aspects of the technology. In July, the Navy will display the electromagnetic railgun prototype at San Diego Naval Base. “Frankly, we think it might be the right time for them to know what we’ve been doing behind closed doors in a Star Wars fashion,” said Klunder. “It’s now reality. It’s not science fiction. It’s real and you can look at it.”