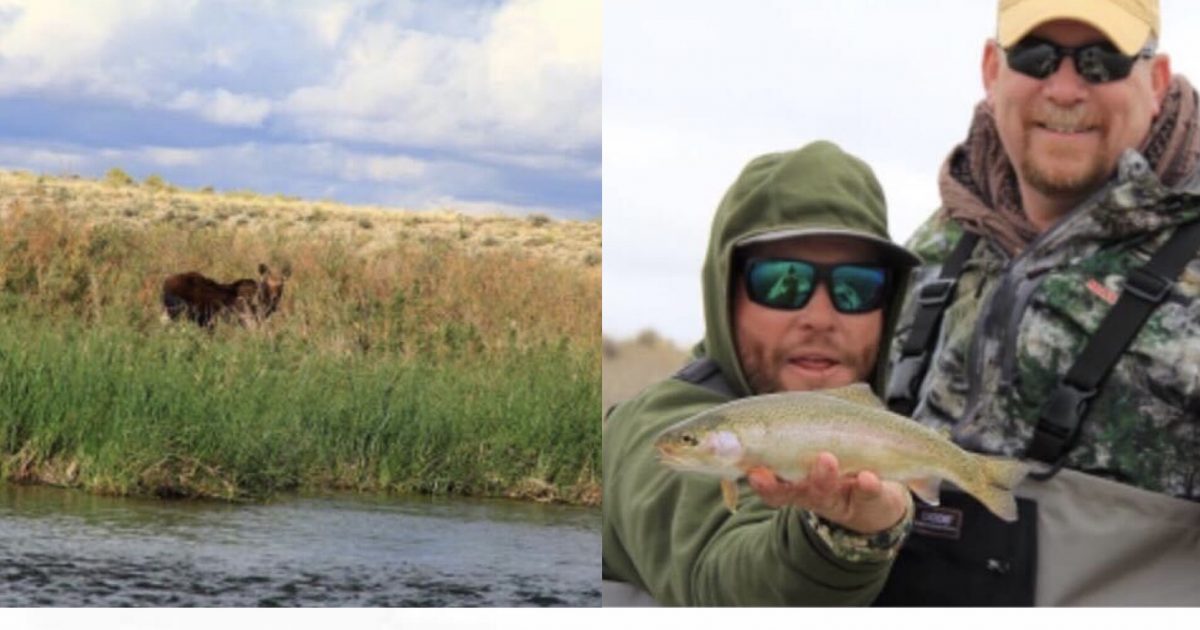 Drifting with the current, the wind blowing across the bow, my roll cast finally landed where I wanted it. The fly settling about six feet above a big boulder jutting out of the river. I watched the fly until it sank into the depths where the current swirled it around the boulder. Just as my line made it into the eddy downstream of it, it violently jerked and changed directions. My prize was a pretty rainbow trout that gave me two very nice acrobatic jumps before coming to net.

That’s how my first 30 minutes started, floating the Green River on the Seedskadee National Wildlife Refuge in southwest Wyoming. The refuge is located 33 miles north of Green River the town, in the shadows of the Wind River Mountain Range. I was here with my group from the Project Healing Waters Fly Fishing (PHWFF) Denver chapter. We were fishing the last weekend in September so there was no telling what the weather would be like. As it turned out, we had a mixture of sun and freezing, blowing rain, and snow testing our skills.

On this trip we had four professional guides that had volunteered their time and boats, Gaven being assigned to me. We stayed in the guest lodge at the refuge headquarters where the staff lived as well. Upon arrival we were greeted with a big bull moose grazing behind the main building out on the prairie. It was all prairie for miles around it seemed, sprinkled with pockets of pronghorn antelope.

I am not sure how they decided to pair us up with our guides, but it was rather comical. Gaven was 5’3” and I’m 6’3” and everyone joked the whole trip about me having my own personal leprechaun guide. All jokes aside, Gaven put me on fish daily and really helped me with my roll casting. He was half my age but had way more fly fishing experience then I did, so I heeded his guidance. Afterall, that is what he normally gets paid to do, guide, and help clients.

Saturday was beautiful with mild temperatures in the 50’s and 60’s the whole day as we drifted. Eagles and osprey were everywhere, flying in pairs and singles while closely watching us. We bumped several flocks of mallard ducks in every back eddy we passed, constantly flying up and down the river. One of the neatest things we saw was passing an island covered in tall grass and finding its feeding occupants. Two juvenile cow moose watched us, unconcerned as we drifted by, more interested in eating.

They might have been 15-20 yards from our boat and were beautiful. I tried to get a picture of them both simultaneously but couldn’t with the tall grass (left picture). It was surprising to see moose in this flat prairie without much cover, I wouldn’t have imagined it. I kept waiting for them to spook and hightail it for the opposite bank, but they didn’t.

Besides the rainbow I previously spoke of, we got into a school of young ones only about six to seven inches in length. I lost count of how many two of the other vets and I caught, seemingly one after another after another. It was all catch and release and loads of fun, watching them out of the water like a mighty tarpon! Nearby in a tree, an osprey appeared to be shaking its head at us.

Gaven continually had me switch flies and occasionally adjust weight to get down to the level of the trout. Recent rains upstream had clouded the river making it impossible to see fish. We were trying to find something that would catch their attention either by color, type of fly, or both. Surprisingly the one that got the most action that first day, was the simple San Juan worm in pink. My second cast after tying it on, a chunky rainbow just hammered it, running hard upstream past us.

We were close enough to the shore that I stepped out and walked the bank to catch up to it. That was easier than turning the boat around in this narrow section of river. Fortunately, the chunk ran back downstream and Gaven was able to net it cleanly (right pic with Gaven in foreground). The rest of the afternoon all of us caught fish, including a kokanee salmon in one of the other boats. My unique catch was a Snake River Cutthroat trout, one I’ve not caught before or since.

Unfortunately, I didn’t get a picture of it as I was celebrating and shouting to the others while Gaven released it unharmed. He didn’t know it was the first and only one I’d ever caught. We hauled out with a beautiful sunset in the background with orange and purple colors in the far off clouds. That night, Gaven and the other guides stayed up until 2 a.m., tying flies for us to use the following day. It was not to be so clear and calm.

Overnight a front moved in and we woke to temperatures in the upper 30’s, windy and slight rain. We were the last boat to launch as the wind and rain picked up. I wasn’t going to waste time before it got worse and I started casting immediately. Five minutes into our drift and I hooked my first rainbow, watching in awe as it danced across the water. About 15 minutes later I caught my second, this one not jumping at all, diving deep like a submarine.

I didn’t know it then, but that was the last one of the trip I would catch. The weather continued to deteriorate and when we stopped for a shore lunch, it began to snow. With many miles to go, we weren’t sure if the weather would improve, so after coffee we pushed out. The wind driven snow, coming down nearly sideways got so thick we couldn’t see 20 yards in front of us. About an hour later, one of our group started to show signs of hypothermia.

Fortunately, I had brought along an extra jacket that I loaned him which helped. We decided not to take a chance with his condition and called it a day and pushed downstream. The snow finally letting up 30 minutes before we made it to the takeout point, the wind never stopping. It’s amazing how quickly you can paddle when you’re cold and ready to get back to the fireplace.  Everyone made it back safely, no worse for wear, and were able to thaw out.

We had a great weekend on the Green River and the surrounding prairie. I finally learned how to roll cast from both sides of the boat. We caught some nice fish, made new friends and even better memories. Trips like these with Project Healing Waters Fly Fishing are always a great time with great people.