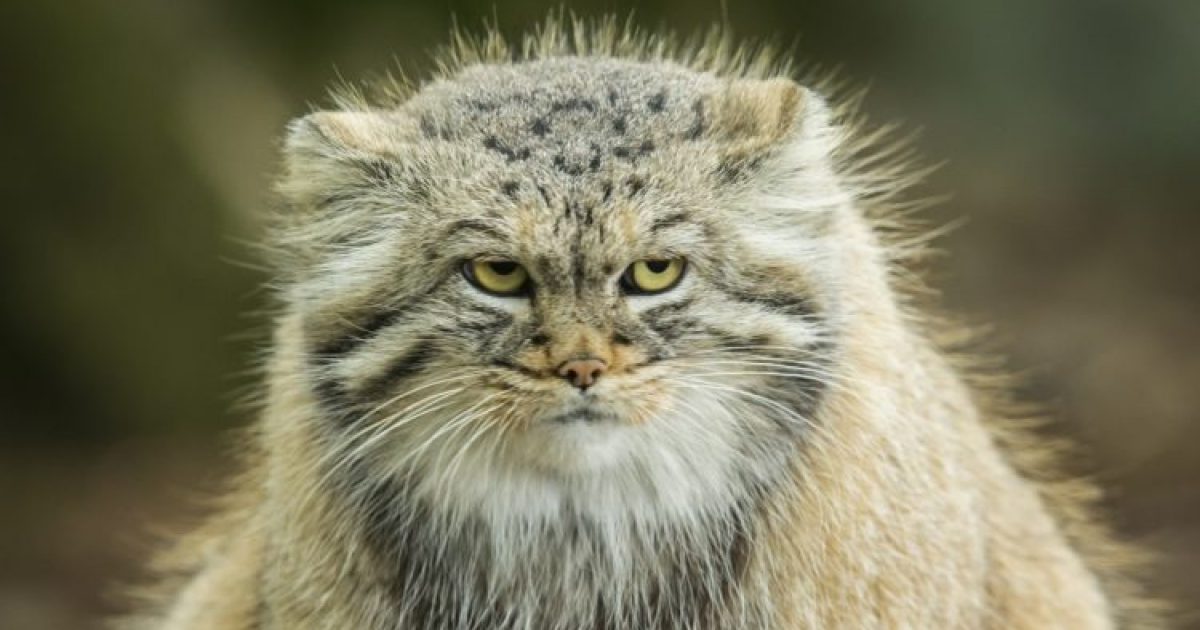 It may look ‘cute & cuddly’ at a distance, but this cat has some very serious ‘anger issues” and if you got too close to one, it would have NO PROBLEM ripping your face off. The Pallas’s cat, also known as the manul, is a small wild cat native to the montane grasslands and shrublands in the Caucasus, Hindu Kush, parts of the Himalayas, Tibetan Plateau, Tian Shan and South Siberian Mountains. This is a very, very evil predator. Dangerous, cunning, always dissatisfied with everything. Hells-bells…just the pissed-off look on it’s face would scare the crap out of most folks

It seems that it’s always in a bad mood and it’s better not to get in its way when it’s in this state. This beast can easily attack a person or even a representative of its species without any reason. But why do these wild cats react to everything with such aggression and are always ready to fight? We’re gonna find out now, but let’s learn a little bit more about this cat before we settle in and watch the video.

These small cats have a stocky body with thick, soft fur and an abundant dark, woolly underfur which is double the length of that on the rest of the body. The color varies from a light grey to a yellowish buff and russet, with the white tips of the hair producing a frosted appearance. There are some faint stripes along the sides of the body (more visible on the summer coat), and the fur on the underside is darker and longer than that above.

Their head is round and broad with scattered black spots on the forehead, and two distinct parallel black bars on each cheek. The large, owl-like eyes are yellow, and the pupils contract into small circles instead of the usual vertical slits. The ears are short, rounded, and set low on the sides of the head. They are buff on the backs. The legs are short and stout, and the tail is thickly furred with a broad terminal black band, and five to six narrow rings along it.

Their habitat is characterized by an extreme climate with little rainfall, low humidity and a wide range of temperatures. Their primarily habitat is the steppe grassland regions of Mongolia, China and the Tibetan Plateau. They have been recorded up to 4,800 m in cold, arid habitats of the dry grassland steppes interspersed with stone outcrops, and in stony desert. These little predators prefer valleys and rocky areas where they have some cover, and avoid completely open habitats. They avoid areas of snow cover that exceed 10 cm, and the continuous snow cover of 15-20 cm marks the ecological limit of the species.

Activity peaks at dusk and dawn, but they may be active at anytime. Their most important prey species is the small pika, which comprise over 50% of their diet. They have three distinct hunting techniques; stalking by creeping around cover; moving and flushing animals out of hiding; and waiting in ambush at rodent burrows.

Body weight varies widely by the season. Females are at their lowest in winter and when raising kittens, males are lowest during breeding season. Their mating call is said to resemble a cross between the bark of a small dog and the hoot of an owl.